Biden orders a review of US supply chains for vital goods

Published 2 Years Ago on Thursday, Feb 25 2021
By Associated Press 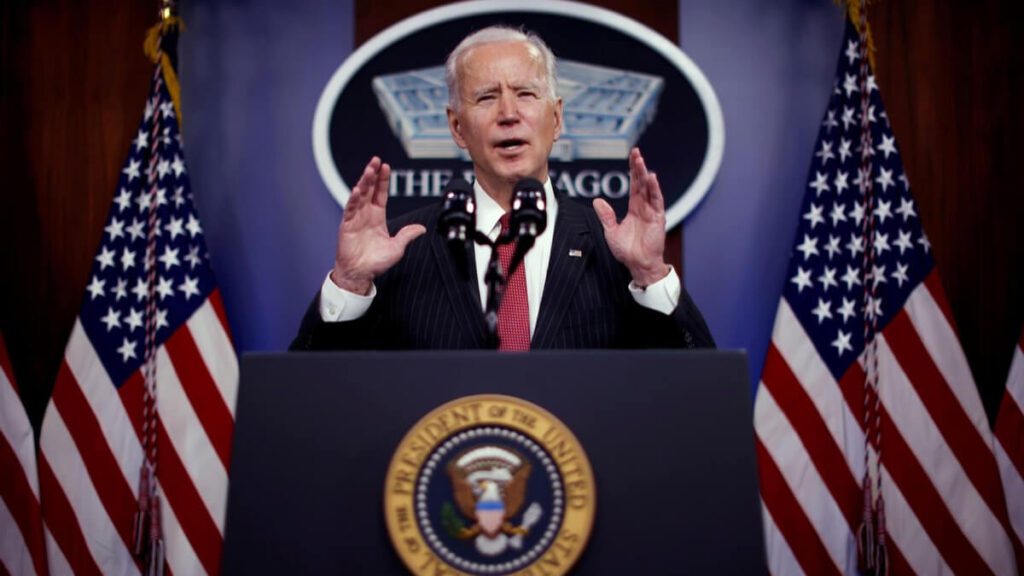 The United States has become increasingly reliant on imports of these goods — a potential national security and economic risk that the Biden administration hopes to address with the planned 100-day review and the possibility of increased domestic production. However, Biden will also look to work with international partners to ensure a stable and reliable supply chain.

“These are the kinds of common sense solutions that all Americans can get behind,” Biden said at a White House ceremony. “It’s about resilience, identifying possible points of vulnerabilities in our supply chains and making sure we have the backup alternatives or workarounds in place.”

White House officials emphasized that the order would help to create manufacturing jobs, a promise made by past presidents with decidedly mixed results. There are 12.2 million manufacturing jobs in the United States, down from 17 million in 2000, according to the Bureau of Labor Statistics.

Biden’s team declined to say how many manufacturing jobs could be created, only that the benefits would extend past factory work. Sameera Fazili, deputy director of the White House National Economic Council, said there will be spillover research and development and jobs in the services sector.

The orders were also distinctly bipartisan as Biden met with Republican and Democratic lawmakers at the Oval Office Wednesday before the signing. Former President Donald Trump signed an executive order last year to boost U.S. production of critical minerals.

“This is a critical area where Republicans and Democrats agreed — it was one of the best meetings I think we’ve had so far and we’ve only been here about five weeks,” Biden said. “It was like the old days. People were actually on the same page.”

Republican Sen. John Cornyn of Texas attended the meeting and said afterward that Biden was very receptive during the conversation.

“He said, ‘we’re all in,'” Cornyn said. “We all understand this is important, not only to our economy, but to our national security, because these cutting edge, high-end semiconductors – they operate on everything from the F-35 fifth generation stealth fighter to our cell phones.”

Senate Majority Leader Chuck Schumer of New York has said the chamber should consider emergency spending to rebuild the capacity of the U.S. semiconductor industry, a sign that congressional support could go beyond Biden’s executive order.

Over the past year, the fragility of vital supply chains has been revealed repeatedly. The coronavirus outbreak led to an initial shortage of masks, gloves and other protective medical equipment. Automakers in the United States and Europe are now dealing with a shortage of computer chips.

The chip shortage is indicative as to why Biden is trying to be proactive with the reviews, so that they can strengthen the supply chains to prevent additional challenges from emerging. Administration officials say that they plan to partner with industry and members of Congress as part of the effort and that no tool is off the table, including the use of the Defense Production Act.

Nearly every major automaker that produces vehicles in the U.S. has cut production because of the shortage by canceling shifts, slowing assembly line speeds or temporarily closing factories. Most automakers have tried to limit the cuts to slower-selling vehicles.

The chip shortage has cost the global auto industry the production of about 1 million vehicles, according to IHS Markit. The analytics firm expects the chip crisis to hit bottom toward the end of March, with supplies constrained into the third quarter.

Moody’s predicts that the chip shortage will cost Ford and General Motors about one-third of their pretax earnings this year. It also expects electric vehicle maker Tesla to be affected, although less than GM and Ford.

Auto industry officials say semiconductor companies diverted production to consumer electronics during the worst of the COVID-19 slowdown in auto sales last spring. Global automakers were forced to close plants to prevent the spread of the virus. When automakers recovered, there weren’t enough chips.

The U.S. Semiconductor Industry Association says the country’s share of global chip manufacturing capacity has dropped from 37% in 1990 to 12% today. The association wants Washington to fund domestic semiconductor manufacturing and research and pass an investment tax credit to help build and modernize chip factories in the U.S.

The wrangling over semiconductors dovetails with China’s economic rise as it became a manufacturing center for electronics. Chinese companies began to account for half of global semiconductor consumption in 2012, and demand has grown as China makes 90% of all smartphones, 67% of all smart televisions and 65% of all personal computers, noted a 2020 research paper by Chad Bown, a senior fellow at the Peterson Institute for International Economics.