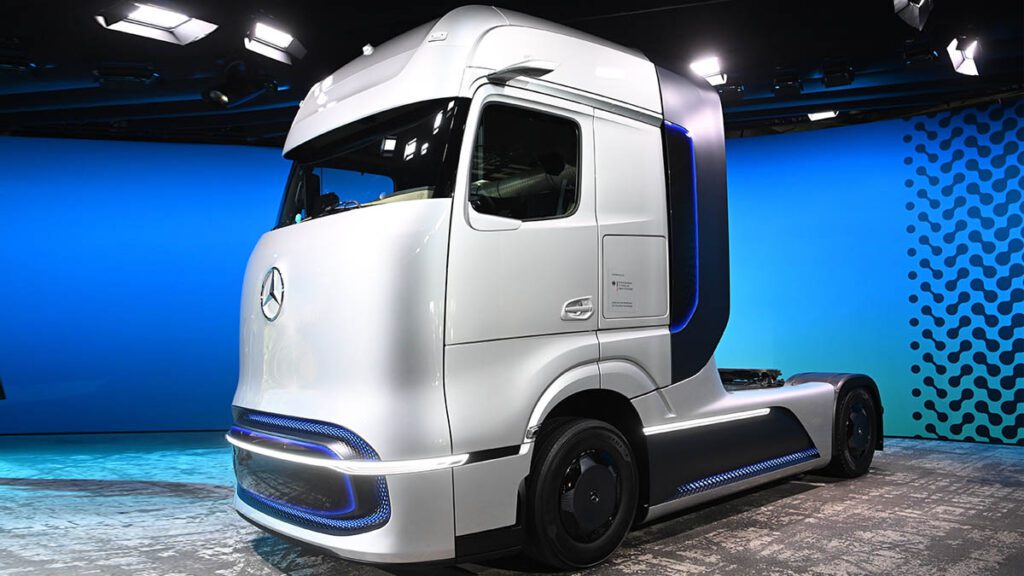 The world’s largest truck and bus maker is charting an ambitious zero-emission future and says it’s not that far off – despite higher costs and the current lack of support infrastructure.

Daimler AG’s truck division says it plans to shift most of its vehicle development resources to zero-emission vehicles by 2025 and predicts that battery and hydrogen-powered trucks could be competitive with diesels on cost later this decade.

Daimler Truck CEO Martin Daum on Thursday underlined the company’s big plans for hydrogen, even though the technology is not as close to practical use as batteries and vehicle costs remain high.

Daimler Truck, with brands including Freightliner and Mercedes-Benz, outlined its strategy for a wide-ranging transition away from internal combustion vehicles after it is spun off as an independent company later this year from Daimler AG. The restructuring would create separate companies for the truck business and Daimler’s Mercedes-Benz luxury car division.

Chief Technology Officer Andreas Gorbach said the company would spend the “vast majority” of vehicle development money on battery and hydrogen vehicles by 2025. He predicted that the cost of such vehicles would fall to parity with diesels sometime after 2025 for battery vehicles and after 2027 for hydrogen fuel-cell trucks.

A key obstacle remains infrastructure for fueling and charging, which is “in its infancy and developing at different speeds around the world,” he said.

Nonetheless, the company’s roadmap foresees up to 60% of sales as battery or hydrogen vehicles by 2030.

The company unveiled a plan to partner with energy company Shell to set up a 1,200-kilometer (745-mile) hydrogen fueling corridor linking Rotterdam in the Netherlands and Hamburg and Cologne in Germany by 2025. Shell would build 150 hydrogen stations along it by 2030. Rotterdam and Hamburg are major commercial ports.

Putting more zero-local emission vehicles on the road is part of Europe’s plan to drastically reduce emissions of carbon dioxide, the primary greenhouse gas blamed for global warming and climate change. The European Union aims to sharply reduce its emissions of greenhouse gases by 2050 to a level that can be absorbed through artificial or natural means, such as oceans, soil and forests.

As a publicly owned company, Daimler Truck will face scrutiny from investors and analysts as it strives both to improve profits from its current offerings and to invest in new technologies expected to dominate the future.

While battery cars and trucks are already on the road, the application of hydrogen fuel cells to power large numbers of vehicles remains farther off. In fuel cells, hydrogen reacts with oxygen to produce electricity and water.

Yet the company is betting heavily on hydrogen despite the challenges. Daum, the Daimler Truck CEO, predicted that electrical grids won’t be able to support an all-battery fleet of trucks as zero-emission cars and trucks become more numerous.

“Both technologies will be needed and we intend to lead the industry in both,” he said.

The company foresees the use of hydrogen for long-haul routes while arguing that battery-powered trucks are more efficient for shorter range deliveries. Daimler Truck is testing a hydrogen-powered long-haul truck, the GenH2, and has battery trucks operating in customer test programs, with mass production expected in 2022 for Freightliners’ eCascadia and 2021 for the Mercedes-Benz eActros.

The spinoff would involve distributing a majority of Daimler Truck shares to existing Daimler AG shareholders. The restructuring as two separate businesses aims to give each more flexibility to react to developments in customer markets, as well as to follow diverging paths in technology development, with Mercedes-Benz luxury cars more focused on batteries and the truck business working on developing hydrogen fuel cells through a joint venture with Volvo.

The companies say that government incentives will be needed to promote adoption of lower-emission transportation since costs are currently higher than for conventional vehicles.