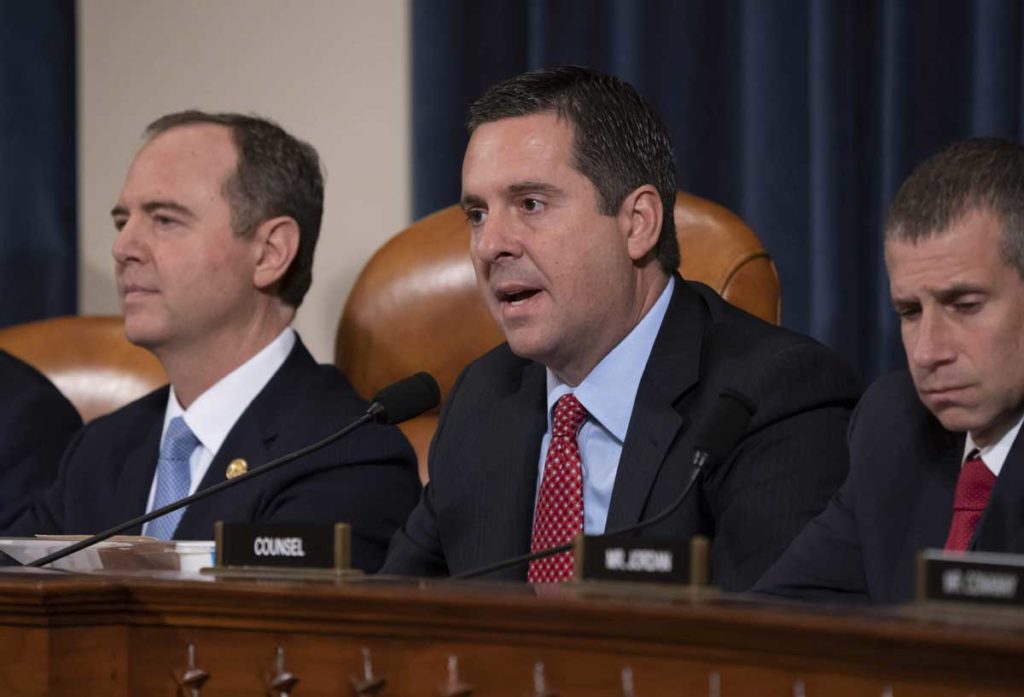 A discredited conspiracy theory that blames Ukraine, and not Russia, for interference in the 2016 U.S. presidential election reared its head again during the first day of public impeachment hearings into President Donald Trump’s alleged attempt to pressure Ukraine into investigating a political opponent.

Subsequently, Deputy Assistant Secretary of State for European and Eurasian Affairs George P. Kent, under questioning, said there was “no factual basis” to any theory of Ukrainian meddling in the 2016 election — while there is ample evidence of Russian interference.

In broad outline, the theory contends, without evidence, that the 2016 hacking of the Democratic National Committee was a setup somehow perpetrated with Ukrainian complicity in which computer records were fabricated to cast blame on Russia. One key figure in this supposed conspiracy: CrowdStrike, a security firm hired by the DNC that detected and analyzed the hack five months before the 2016 election.

Kent said Wednesday that he hadn’t even heard of the theory until a whistleblower alerted the public to a July 25 call between Trump and the Ukrainian president.

Here’s how the call brought the debunked theory back into currency.

During that July call with Ukrainian President Volodymyr Zelenskiy, Trump made a brief and cryptic reference to CrowdStrike. According to a reconstructed transcript of the call released by the White House, which is not a verbatim account, he said:

“I would like to find out what happened with this whole situation with Ukraine, they say CrowdStrike . I guess you have one of your wealthy people. The server, they say Ukraine has it.” Trump added that he’d like to have Attorney General William Barr call “you or your people and I would like you to get to the bottom of it.”

CrowdStrike determined in June 2016 that Russian agents had broken into the committee’s network and stolen emails that were subsequently published by WikiLeaks. Its findings were confirmed by FBI investigators, with whom it later shared the forensic evidence.

Based on those findings, Special Counsel Robert Mueller indicted 12 members of Russia’s military intelligence agency and later concluded that their operation sought to favor Trump’s candidacy.

Mueller testified before the U.S. Congress the day before Trump’s phone call with Zelenskiy.

In the call, Trump mentioned Mueller’s “incompetent performance” and said “they say it started with Ukraine.”

Ukraine and Russia have essentially been at war since Russia’s 2014 military intervention and annexation of Crimea. Unsubstantiated conspiracy theories about a purported Ukrainian link to the DNC hack began circulating almost immediately after it was discovered.

Some propagated by Russian media and online included mention of a supposed “hidden DNC server,” which acolytes of the Republican political operative Roger Stone picked up and circulated.

Stone is now standing trial for allegedly lying to Congress, obstructing justice and witness tampering after getting swept up in the Mueller probe. He has claimed that CrowdStrike is concealing evidence that could presumably clear Russia of culpability.

The presiding judge has denied Stone’s efforts to challenge the investigation into the hack.

CrowdStrike has also worked for the GOP. It helped the National Republican Congressional Committee investigate email thefts by unidentified hackers during the 2018 campaign, the company told the AP in December.

One version of the conspiracy theory holds that CrowdStrike is owned by a wealthy Ukrainian. In fact, company co-founder Dmitri Alperovitch is a Russian-born U.S. citizen who immigrated as a child and graduated from the Georgia Institute of Technology.

Trump himself has made this erroneous reference before.

In an April 2017 interview with The Associated Press, Trump said: “Why wouldn’t (former Hillary Clinton campaign chairman John) Podesta and Hillary Clinton allow the FBI to see the server? They brought in another company that I hear is Ukrainian-based.”

The reference raises questions about Trump’s ability — or, perhaps, willingness — to sort between fact and fiction, analysts say.

“If we take Trump’s words at face value, then it appears that the president of the United States is intellectually unable to distinguish between utterly outlandish conspiracy theories and solid intelligence assessments based on facts,” said Thomas Rid, a Johns Hopkins security studies professor.

Joan Donovan of Harvard University said conspiracy theories generally have two principal attributes: They simplify matters and lack attribution. And some political actors see a benefit to encouraging them.

“Who can know the truth in these conditions? No one,” said Donovan, who directs the Kennedy School’s technology and social change research project.

CrowdStrike said in a statement that it “provided all forensic evidence and analysis to the FBI.” It added: “We stand by our findings and conclusions that have been fully supported by the US Intelligence community.”

In October, acting White House Chief of Staff Mick Mulvaney said the Trump administration’s decision to hold up military aid to Ukraine was linked to his demand that Kyiv investigate the DNC and the 2016 campaign. Those who believe Trump should be impeached say there is ample evidence the aid was frozen in order to pressure Zelenskiy to investigate political rival Joe Biden’s son’s business activities in Ukraine.

“The look back to what happened in 2016 certainly was part of the thing that he was worried about in corruption with that nation,” Mulvaney said.

“Did he also mention to me in the past the corruption that related to the DNC server? Absolutely, no question about that,” he added. “That’s why we held up the money.”