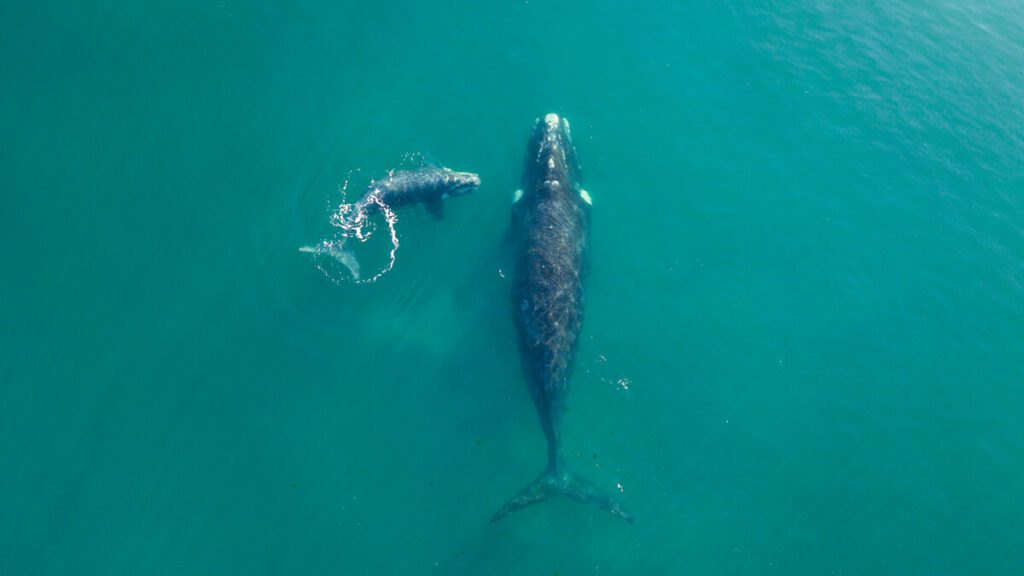 One of the world’s most endangered whale species could have added protection from threats posed by human marine activity, through technology developed by the University of East Anglia (UEA).

In partnership with the Scottish Association for Marine Science (SAMS) and the marine survey company Gardline Geosurvey Limited, UEA researchers have developed machine learning techniques that can be used to detect the presence of North Atlantic right whales population by listening for the sounds they make underwater.

Detecting the animals’ presence before they reach close proximity to large vessels or enter a mitigation zone can both protect animals and avoid costly shutdowns of offshore operations.

The findings, ‘Robust North Atlantic right whale detection using deep learning models for denoising’, is published today in a special edition on machine learning in acoustics, in The Journal of the Acoustical Society of America.

North Atlantic right whales are one of the world’s most endangered marine species with only around 350 remaining and of those, only about 100 females of breeding age. Human activities are a significant threat to right whale populations, either through entanglement in fishing gear or strikes from shipping.

Calls from right whales are often confused with noises made from shipping or other underwater activities, such as fishing and drilling. The new techniques developed by UEA, and its partners can remove these unwanted noises from recordings, thereby increasing the reliability of detecting right whales in adverse conditions.

The conventional way of locating right whales population relies on observers onboard ships, but this is expensive and not possible at night or in low-visibility conditions. An automated method to detect the presence of right whales gives much more hope for the species to survive and increase in population, said lead researcher Dr Ben Milner of UEA’s School of Computing Sciences.

Dr Milner, a senior lecturer, said: “The aim of this work is to develop robust methods of detecting marine mammals from passive acoustic monitoring (PAM) devices in challenging environments.

“Having the ability to deploy an automated system – whether it be on buoys, Autonomous Surface Vehicles (ASVs), or gliders – that can achieve high levels of detection in real-time, is vital to the long-term future of right whales population.

“Being able to reliably detect marine mammals is important for population monitoring and for mitigation, as many species are endangered and protected by environmental laws.”

The technology aims to find right whales in situations where they could be approaching potentially harmful and noisy offshore activities. In such scenarios shipping can be asked to change course and in extreme situations the offshore activities must be stopped, which can be very costly to operators.

Right whales population emit a range of vocalizations, with common sounds being upcall tones and gunshot sounds. Upcalls most likely play a role as a social contact call between individuals and are produced by both sexes and different age classes and are therefore most commonly used for passive acoustic detection of the species.

The gunshot sounds are very different from upcalls and are characterized as an impulse, and although less common, can also be detected by the new technology.

Both vocalization types can be difﬁcult to hear in noisy conditions and to visualize in spectrograms, as low frequency regions are often masked by marine noise from passing ships, drilling, and piling activities, seismic exploration, or interference from other marine mammals, such as humpback whale song.

In many cases, anthropogenic and environmental noises overlap in frequency with right whales population calls, which makes detection difﬁcult.

The researchers studied ‘de-noising’ processes that could block out non-whale noises from trawlers, tankers, and other human activities.

The right whale recordings used for evaluating the classiﬁers and denoising methods were taken from the Detection, Classiﬁcation, Localization, and Density Estimation (DCLDE) 2013 workshop and were collected in the Gerry E. Studds Stellwagen Bank National Marine Sanctuary from the Massachusetts Bay area of the north-eastern coast of the United States.