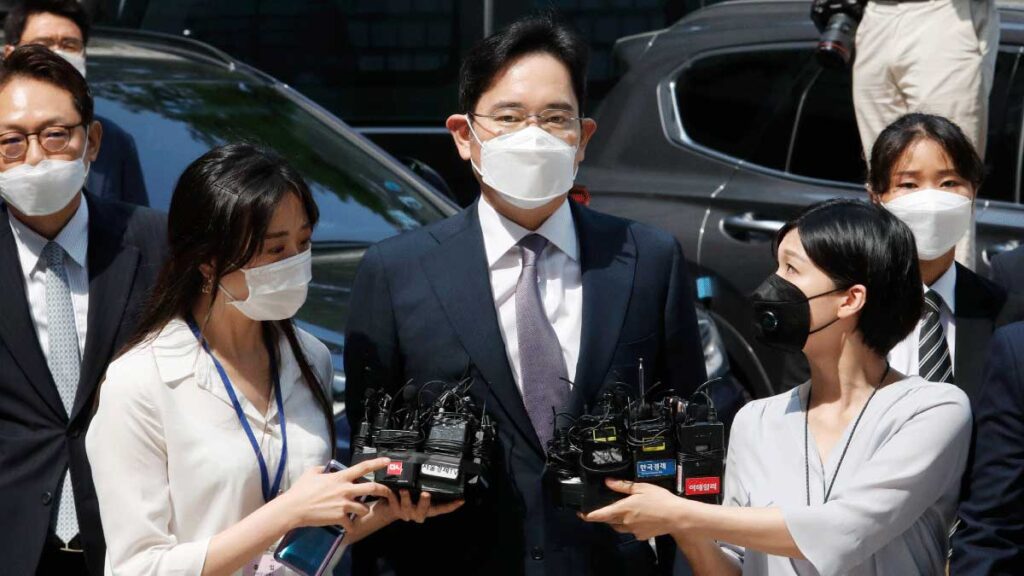 Pressure is mounting on South Korean President Moon Jae-in to pardon Samsung heir Lee Jae-yong, who is back in prison after his conviction in a massive corruption scandal, even though business has rarely looked better at South Korea’s largest company.

Lee is just the latest South Korean corporate boss to run his business from behind bars, communicating decisions through visiting company executives. But his imprisonment is causing national handwringing over the future of the technology giant in the country sometimes called the “Samsung Republic.”

Many people — from business leaders and editorial writers to even Buddhist monks — have urged Moon to release Lee for the sake of an economy heavily dependent on Samsung’s technology exports. They worry Lee’s imprisonment could compromise Samsung’s speed and decisiveness, hindering its competitiveness in the fast-changing technology business.

Lee has been in prison for nearly four months and few expect him to serve his full prison sentence through July 2022. There’s speculation Moon could free him on Buddha’s Birthday, which falls on Wednesday.

There’s also Liberation Day in August, which celebrates Korea’s independence from Japanese colonial rule at the end of World War II. That also has often brought presidential pardons of high-profile politicians and businesspeople.

Moon’s office said he will consider both the intensifying competition in the semiconductor market and public feelings about fairness before deciding whether to pardon Lee.

Lee runs Samsung as vice chairman. He’s also the country’s richest person. He is serving a 2 1/2-year sentence for bribing then-President Park Geun-hye and her close confidante, who are serving lengthier prison terms, to win government support for a 2015 merger between two Samsung affiliates that tightened his control over the corporate empire.

The company posted a near 50% jump in operating profit and its $58 billion revenue was the highest ever in the first three months of the year. Demand for its mainstay computer memory chips, TVs and other products has surged as the pandemic has forced millions to stay home. And Samsung’s sleek Galaxy smartphones and tablets are the biggest competition for Apple’s iPhones and iPads.

Samsung has announced ambitious plans to expand its computer chip manufacturing. Last week it said it will invest 171 trillion won ($151 billion) through 2030 in higher-margin logic chips and its foundry business for contract chipmaking as it expands beyond its dominance in memory chips. The company expects demand for advanced chips to soar in coming years, lifted by emerging technologies such as fifth generation (5G) wireless networks, artificial intelligence and self-driving cars.

Both could be threatened by U.S. efforts to reduce American dependence on Asian supply chains and rebuild the declining U.S. chip industry in response to chip shortages that have hobbled American auto manufacturing in recent months.

In a statement to The Associated Press, Samsung said Lee’s role is to “contribute to the company’s overall strategic direction, and make decisions related to the future growth through his insights and global network of business leaders.” The company declined to comment on calls for Lee’s release and also would not say how often company officials are visiting him.

“It’s not difficult for Lee to manage the company from prison through his visitors, and it’s not like he had ever run Samsung like an omnipotent king,” said Chung Sun-sup, chief executive of corporate analysis firm Chaebul.com. Even though Lee is the grandson of Samsung’s founder and is the family’s third generation helmsman of the company, important decisions are still weighed by the board, he noted.

“But who knows what Samsung is missing when Lee isn’t visiting business sites or traveling abroad for new opportunities?” he said.

Lee’s imprisonment comes at a time when Samsung should be pushing for a major reshaping of its semiconductor business, said Lee Seung-woo, a senior analyst at Seoul-based Eugene Investment and Securities.

Samsung’s rise as a global technology powerhouse drew from its dual strength in parts and finished products. But that’s proving a disadvantage in its competition with TSMC as major clients like Apple shift orders to TSMC to avoid relying on chips manufactured by a competitor.

Samsung should be considering bold moves, such as splitting its foundry business into a separate company and listing it on the U.S. stock market to ease the concern of clients, Lee said.

“Lee Jae-yong clearly has a role to do,” he said. “Lee could be meeting (Apple CEO) Tim Cook asking Apple to invest in the new foundry company.”

Samsung’s daily operations are mainly handled by co-CEOs who each lead its semiconductor, smartphones and consumer electronics divisions. Samsung reaped robust profits during Lee’s earlier stints in jail, in 2017 and 2018, when it finalized a deal to acquire American auto electronics firm Harman. That assuaged jitters about a possible void in decision making.

The scandal that snagged Lee Jae-yong again underscored traditionally cozy ties between “chaebol,” or South Korea’s family-owned conglomerates, and the government. Park was ousted and jailed in 2017 following months of protests by millions.

Moon has been sidestepping the pardon issue for months, having taken office vowing to curb the excesses of chaebol families after winning the presidential by-election following Park’s ouster.

South Korea has long been lenient toward white-collar crimes, letting convicted tycoons run their businesses from prison. Officials say that’s best for the economy even though the crimes committed by chaebol bosses usually put their personal interests ahead of corporate concerns.

SK Group Chairman Chey Tae-won held nearly 1,800 meetings with his lawyers and other visitors in 17 months through July 2014 while serving a four-year prison term for embezzlement and other crimes, according Justice Ministry comments to lawmakers.

Hyundai Motor Corp. reportedly set up a “liaison office” nearby to receive guests and staff visiting its former chairman Chung Mong-koo after he was arrested in 2006 on charges of embezzling company funds to bribe officials.

Chey and Chung received presidential pardons, as did Lee’s father.

“Was there ever a time when pardoning a chaebol boss really helped a company or the Korean economy? No, not even once,” Park said.