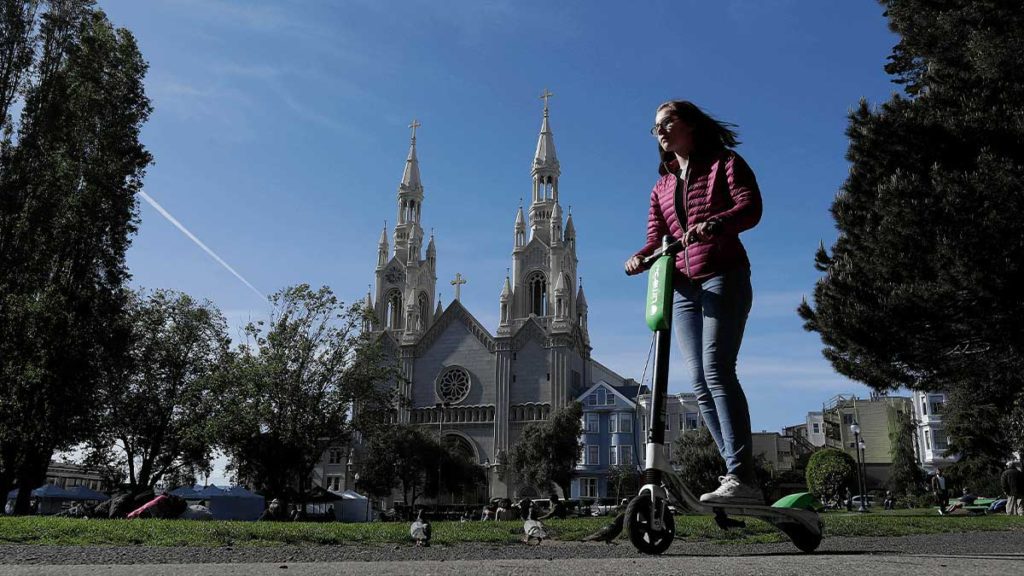 Published: December 11, 2019 by Inside Telecom Staff

SAN FRANCISCO (AP) — Tired of San Francisco streets being used as a testing ground for the latest delivery technology and transportation apps, city leaders are now requiring businesses to get permits before trying out new high-tech ideas in public.

Supporters of the legislation, which the Board of Supervisors unanimously approved Tuesday, say it is the first of its kind in the U.S. They say it’s long overdue in a city that’s a hub for major tech companies but is more accustomed to reacting to the sudden arrival of new technology — like hundreds of dockless electric scooters that appeared overnight last year.

The e-scooter trend has led to complaints from people in cities across the country.

The tech industry has showered San Francisco with high-paying jobs and cemented its reputation as a place for big ideas, but the success of home-grown companies Airbnb, Lyft and Uber has vexed some residents as streets have become more congested and the housing shortage has worsened.

“I support innovation and technology, but our residents are not guinea pigs, and our public infrastructure is not a free-for-all,” said Norman Yee, president of the Board of Supervisors who introduced the legislation.

The Office of Emerging Technology will serve as a one-stop shop for entrepreneurs who want to test their products in San Francisco’s public space. Companies will not be allowed to experiment unless the office declares the tech in question a “net public good.”

It’s not clear how criteria will be used to evaluate proposals, but companies that share data, ensure public safety and privacy when testing, and promote job creation would fare better than those that don’t.

The office will have oversight over new technology launched on, above or below city property or on public right-of-ways, but the legislation does not spell out all the possible technologies the office would oversee.

Yee said hoverboards, delivery drones and data-gathering devices on sidewalks or other public infrastructure would be subject to regulation. He’s even heard of a business that wants to promote low-tech pogo sticks as transportation. The concept makes him shudder.

Local officials have a duty to protect public infrastructure and to send the message that public space is “not the Wild West” for anyone with coding skills and a neat idea, said Aaron Klein, a fellow in economic studies at the Brookings Institution, a public policy think tank.

“On the other hand, too much local control and too many hoops to jump through can be easily manipulated by vested interests to fight advancement,” he said.

“It had a detrimental and lasting effect on the quality of life and the health of our city,” he said.

For instance, San Francisco did not start regulating Airbnb until 2014, years after the company started advertising short-term rentals despite a city law that prohibited such stays. Officials also are tangling with Uber and Lyft over congestion, user data and driver pay, among other issues.

Transportation companies like those ride-hailing services are overseen by the state so could not be regulated by the city office, says Erica Maybaum, an aide to Yee. It also would not regulate a service like Airbnb because that involves a private platform and private properties, she said.

The Silicon Valley Leadership Group, founded by David Packard of Hewlett-Packard, objects to the permitting requirement, saying it would stifle innovation and burden business.

But the legislation has the backing of sf.citi, a tech association founded by angel investor Ron Conway, who’s a longtime nemesis of advocates of stricter regulation.

“We believe that the supervisor’s approach of working with — rather than against — industry to build legislation is the kind of leadership this city needs to be successful,” said Jennifer Stojkovic, sf.citi’s executive director.

Vikrum Aiyer, vice president of public policy at food delivery service Postmates and a member of the work group that crafted the legislation, said at a public hearing last month that the days of public-private head-butting are over.

Yee came up with the idea for regulation nearly two years ago, after he successfully passed legislation requiring companies to get permits to test delivery robots. The idea gained more urgency after hundreds of dockless scooters appeared on city sidewalks in 2018, providing a fun ride for some but irritation for others forced to weave around them. The city moved to ban the scooters until officials could regulate them.