Published 2 Years Ago on Saturday, Dec 26 2020
By Inside Telecom Staff 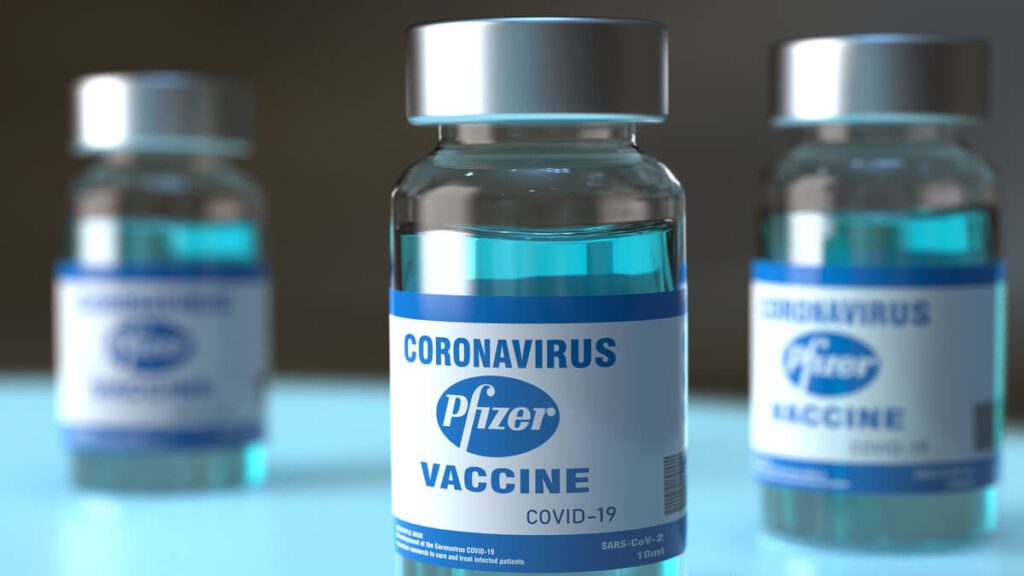 MADRID — Spanish authorities say the first batch of the coronavirus vaccine to reach the country has arrived.

The government said Saturday morning that a truck transporting the vaccine produced by Pfizer arrived at a company warehouse in the central city of Guadalajara after making the trip from Belgium. It is the first part of what the government says will be weekly shipments of an average of 350,000 doses.

The first vaccines will be administered Sunday morning at a nursing home in Guadalajara.

Spain plans to receive more than 4.5 million doses of the Pfizer vaccine over the next 12 weeks, enough it says to immunize just over 2.2 million people. It will represent the first phase of a national vaccination plan.

— Around 1,000 British soldiers were spending Christmas Day trying to clear a huge backlog of truck drivers stranded in southeast England.

— South Africa’ s normally joyful and lively Christmas celebrations have been dampened by the spike in new cases and deaths driven by the country’s variant of COVID-19.

— U.S. factories have been cranking out goods at a rate that is remarkably close to normal, despite the ongoing spread of the coronavirus.

HERE’S WHAT ELSE IS HAPPENING:

LJUBLJANA, Slovenia — Initial shipments of Pfizer-BioNTech vaccines have arrived in Slovenia and neighboring Croatia ahead of the inoculation start in the European Union on Sunday.

Slovenia’s Prime Minister Janez Jansa on Saturday said on Twitter that 9,750 vaccines developed by the U.S. and German companies are in Slovenia. He said vaccination will start across the country on Sunday.

Authorities have said that care home residents and front-line medical staff will be the first to receive the vaccines. The official STA news agency says the next shipment of 6,825 doses is expected next week.

In Croatia, the first batch of 9,750 vaccines arrived early on Saturday. The state HRT TV says a care home resident in Zagreb, the capital, will be the first to receive the vaccine on Sunday morning.

TOKYO — Tokyo has confirmed 949 new cases of the coronavirus, a new high for the Japanese capital, as the country struggles with an upsurge that is spreading nationwide.

The Tokyo Metropolitan Government said Saturday that the additional cases bring the prefectural total to 55,851. Japan had 3,823 new cases Friday for a national total of 213,547, with 3,155 deaths, the health ministry said.

Japan has not been able to slow the infections despite government requests for the people to avoid going out for dinner and parties before and during the holiday season.

Tokyo Gov. Yuriko Koike has ordered bars to close early and urged residents to avoid nonessential outings. But many people have continued commuting on crowded trains and going out for dinner and drinks.

CAIRO — Egypt has reported over 1,000 new coronavirus cases, its highest total in months, as authorities appeal to people to stick to preventive measures to avoid a lockdown.

The Health Ministry on Saturday reported 1,113 new cases, as well as 49 deaths.

The new numbers have brought the county’s official tally to more than 130,126 cases, including at least 7,309 deaths.

However, the actual numbers of cases in Egypt, the Arab world’s most populous county with over 100 million people, are thought to be far higher, in part due to limited testing.

Authorities have been urging people to stick to preventive measures, particularly wearing face masks and practicing social distancing, to avoid a lockdown that would leave devastating economic consequences.

Two domestic cases were reported on Friday, a convenience store worker and a Hewlett Packard Enterprise employee. Another two asymptomatic cases were discovered in Beijing earlier in the week.

Beijing is conducting testing on a limited scale in the neighborhoods and workplaces where the cases were found.

To contain any new outbreaks, the Beijing government canceled big gatherings such as sports events and temple fairs. It says applications will be strictly reviewed for any major events. Venues such as cinemas, libraries and museums have to operate at 75% capacity.

It also called on companies not to arrange business trips outside the city and abroad.

Separately, officials in the northeastern port city of Dalian said Friday that they had tested over 4.75 million people for the coronavirus after 24 confirmed infections this month.

Authorities have shut schools and all public spaces in five neighborhood divisions in Dalian, and only essential workers can leave their compounds.

SEOUL, South Korea — South Korea has reported another 1,132 coronavirus cases as the resurgence worsened over the Christmas week, putting pressure on the government to enforce stricter distancing controls.

The figures released by the Korea Disease Control and Prevention Agency on Saturday brought the country’s caseload to 55,902. The country added 1,241 cases on Christmas Day, its largest daily increase. Total fatalities stood at 793 after more than 220 COVID-19 patients died in the past 15 days alone as the surge left hospital capacities and medical staff stretched thin.

Around 780 of the new cases were from the greater Seoul area, home to 26 million people. Health workers discovered a large virus cluster in a huge prison with more than 500 inmates and workers. Transmissions in recent weeks have also been tied to hospitals, nursing homes, churches, restaurants and army units.

Government officials restored some social distancing restrictions in recent weeks after easing them to the lowest tier in October and are now clamping down on private social gatherings, shutting down ski resorts, restricting hotel occupancy and setting fines for restaurants if they accept large groups.

Officials plan to meet Sunday to determine whether to possibly shutter hundreds of thousands of nonessential businesses. They have resisted such action for weeks, saying it could unleash further shock on an already weak economy.

A French man living in England arrived in France on Dec. 19 and tested positive for the new variant Friday, the French public health agency said in a statement. He had no symptoms and was isolating in his home in the central city of Tours.

Authorities were tracing the person’s contacts and laboratories were analyzing tests from several other people who may have the new variant, the statement said.

Some other European countries have also reported cases of the new variant, which British authorities said appears more contagious and was spreading fast. The British announcement Dec. 19 prompted countries around the world to suspend flights from the U.K., and France banned all passengers and cargo from Britain for two days, causing massive traffic problems around the British port of Dover.

France reopened the border but now requires anyone entering from Britain to have a test showing they do not have the new variant.

A second partial lockdown sharply curbed France’s infections, but they have been again on the rise over the past two weeks. France has among the world’s highest virus death tolls.

DALLAS — Coronavirus hospitalizations in Texas on Friday approached a peak equaling the summer’s surge even as health officials warned that holiday gatherings and travel are likely to further spread the virus and pressure health care services.

The state health department reported 10,868 patients hospitalized with confirmed cases of COVID-19 in the state on Christmas, less than 30 behind the record high set in July. Intensive care units in several parts of Texas were full or nearly full, according to the Texas Department of State Health Services.

Texas on Friday reported 200 more death from COVID-19. There were 3,123 newly confirmed cases of the virus and another 973 probable cases, according to the health department.

ATHENS — The first vaccines against the coronavirus have arrived in Greece.

The first 9,750 doses arrived overland, crossing from the Bulgarian border in the north Friday evening, with the van carrying them escorted by six police cars, a video taken at the border shows.

Greece’s president, prime minister and a total of 42 government, military and police officials deemed essential to the functioning of the state, as well as opposition leaders, will also be vaccinated in the first days.

Health authorities announced Friday 617 new infections over the past 24 hours, alongside 50 deaths.

The numbers are lower than recent trends, but authorities are still vigilant against a possible spread during the holiday season.

Five subway stations in central Athens were closed Friday afternoon to keep people from congregating in the capital’s festively decorated central squares and avenues. A nightly curfew at 10 p.m. is still in effect across the country.

The figures from the Health Ministry on Christmas Day included 459 deaths registered since Thursday. That brings the number of known pandemic dead in Italy to 71,359.

As it has had most recently, the northeast Veneto region reported the highest daily caseload, with just over 5,000 confirmed infections registered on Friday.

That’s nearly double the day’s caseload in neighboring Lombardy, the populous region which has suffered the most deaths and has had the most COVID-19 cases since Italy’s first native case emerged in February.

TOKYO — Japan’s Health Ministry has confirmed the country’s first cases of infection with the new variant of the coronavirus that was identified in Britain.

The five people arrived between Dec. 18 and Dec. 21, before Japan stepped up border control on Friday for entrants from Britain. A man in his 60s developed fatigue, but the other four were without symptoms.

Health Minister Norihisa Tamura said the five were sent to quarantine straight from the airports.

After they tested positive for the virus, further analysis conducted at the National Institute of Infectious Diseases determined they had the British variant that is 70% more transmissible, the ministry said in a statement.

MOSCOW — Russian authorities have ordered those arriving from the U.K. to quarantine for two weeks.

Earlier this week, Russia suspended direct flights from the U.K. after a variant of the coronavirus that is 70% more transmissible has spread across London and parts of England.

The order from the Rospotrebnadzor sanitary safety agency posted Friday on the portal of official information obliges all those traveling from the U.K. to remain in isolation for 14 days after their arrival in Russia. The measure is effective starting Saturday.

Dozens of countries have barred flights from the U.K. or announced travel restrictions. The United States will require airline passengers from Britain to get a negative COVID-19 test before their flight starting Monday.

By The Associated Press undefined.