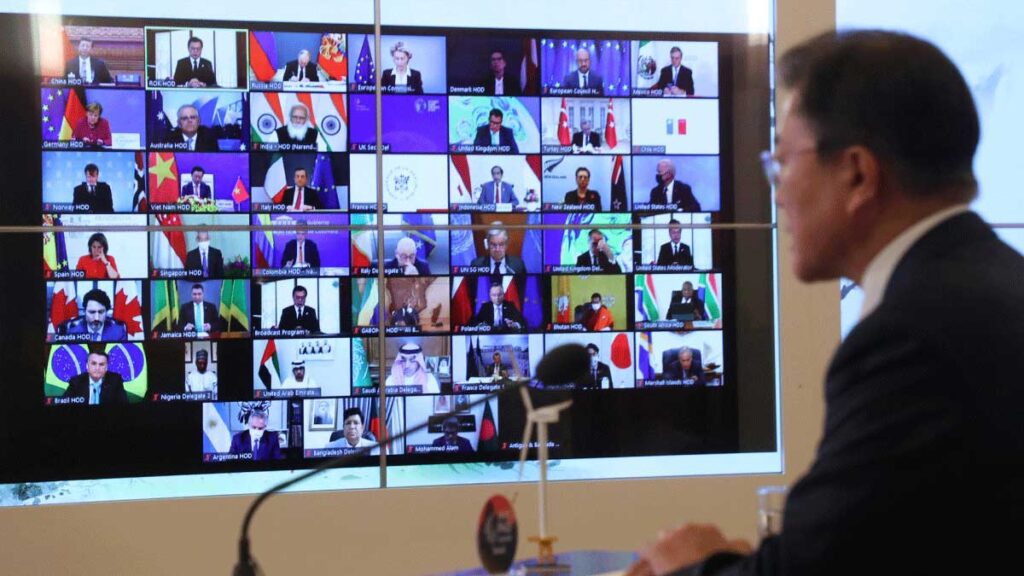 Just like the rest of us, world leaders are still figuring out the tech side of virtual work, even more than a year into the pandemic. Thursday’s livestreamed U.S.-hosted global climate summit started with a glitch, not a bang.

That set a tone for the event, which also featured random beeps, still more echoes and the accidental disclosure that French President Emmanuel Macron’s speech seemed to be taped.

The first time Macron came on, there was no simultaneous translation until the very end, when he introduced Russian President Vladimir Putin.

But no one told Putin. For an uncomfortably long time, more than a minute, the Russian leader was silent on screen, staring forward and not talking except to turn his head toward aides. Sometimes his finger danced around his lips and chin.

Finally he got his cue and started to talk.

When Putin finished, Secretary of State Antony Blinken, the master of ceremonies, asked for the tape of Macron to be replayed. The translation was still late, but at least it showed up.

Australia’s prime minister had a glitch that Zoom users know all too well in the “you’re on mute” era. He started talking, but no one could hear him at first.

During several leaders’ talks, phone-dialing beeps intruded. There were several times when stray voices talked over leaders, and the feed from Colombia was fuzzy.

When Biden came back for his second talk, this time emphasizing money and technology, technology didn’t cooperate. That start-of-the-show echo was back, was back.

Not all the funny moments were technical glitches.

Boris Johnson, the prime minister of the United Kingdom, wanted everyone to know fighting climate change isn’t about “bunny hugging.” So serious was he about making the point, he used the phrase twice, essentially saying “hare, hare” to the echo theme.