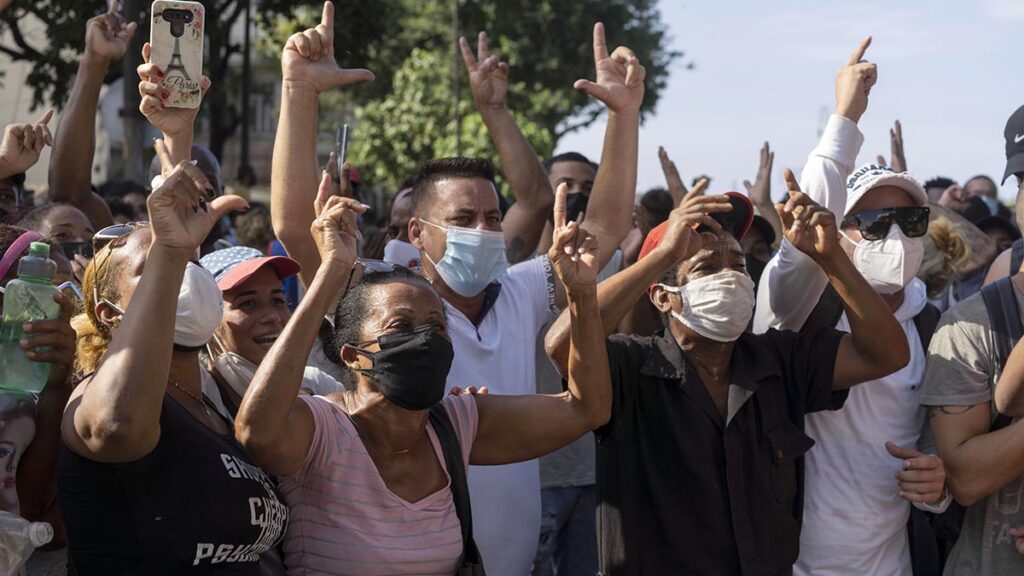 Cubans facing the country’s worst economic crisis in decades took to the streets over the weekend. In turn, authorities blocked social media sites in an apparent effort to stop the flow of information into, out of and within the beleaguered nation.

Restricting internet access has become a tried-and-true method of stifling dissent by authoritarian regimes around the world, alongside government-supported disinformation campaigns and propaganda. On the extreme side, regimes like China and North Korea exert tight control over what regular citizens can access online. Elsewhere, service blockages are more limited, often cutting off common social platforms around elections and times of mass protests.

There was no formal organizer of Sunday’s protests; people found out about the rallying points over social media, mostly on Twitter and Facebook, the platforms most used by Cubans. The thousands of Cubans who took to the streets — protesters and pro-government activists alike — wielded smartphones to capture images and send them to relatives and friends or post them online.

On Monday, Cuban authorities were blocking Facebook, WhatsApp, Instagram and Telegram, said Alp Toker, director of Netblocks, a London-based internet monitoring firm. “This does seem to be a response to social media-fueled protest,” he said. Twitter did not appear to be blocked, though Toker noted Cuba could cut it off if it wants to.

While the recent easing of access by Cuban authorities to the internet has increased social media activity, Toker said, the level of censorship has also risen. Not only does the cutoff block out external voices, he said, it also squelches “the internal voice of the population who have wanted to speak out.”

Internet access in Cuba has been expensive and relatively rare until recently. The country was “basically offline” until 2008, then gradually entered a digital revolution, said Ted Henken, a Latin America expert at Baruch College, City University of New York. The biggest change, he noted, came in December 2018 when Cubans got access to mobile internet for the first time via data plans purchased from the state telecom monopoly. These days, more than half of all Cubans have internet access, Henken said.

Many Cubans now have real-time, anywhere-you-are access to the internet and the ability to share information among themselves, he added. Since early 2019, this access has facilitated regular, if smaller, events and protests on the island. In response, the government has periodically shut down access to social media, mostly to hide its repressive tactics from both citizens and foreigners, he said.

The Cuban government also restricts independent media in Cuba and “routinely blocks access within Cuba to many news websites and blogs,” according to Human Rights Watch.

Cuba is going through its worst economic crisis in decades, along with a resurgence of coronavirus cases, as it suffers the consequences of U.S. sanctions imposed by the Trump administration. The protests now, the largest in decades, are “absolutely and definitely fueled by increased access to internet and smartphones in Cuba,” said Sebastian Arcos, associate director of the Cuban Research Institute at Florida International University.

Social media posts from within and outside of Cuba are “not the root causes of the rebellion, but they are a factor in connecting the desperation, disaffection that exists in the island,” said Arturo López-Levy, an assistant political science professor at Holy Names University in California.

López-Levy, who grew up a few blocks from Cuban President Miguel Díaz-Canel, said the country’s current leader has embraced the economic potential of digital technology far more than his predecessors, but may have calculated that a large segment of Cubans will accept a temporary internet shutdown if it helps restore order in the streets.

Elsewhere, government internet shutdowns after or ahead of protests have also become commonplace, whether for a few hours or extending for months. In Ethiopia, there was a three-week shutdown in July 2020 after civil unrest. The internet blackout in the Tigray region has stretched on for months. In Belarus, the internet went down for more than two days after an August 2020 election seen as rigged sparked mass protests. Mobile internet service repeatedly went down during weekend protests for months afterwards.

A decade ago during the Arab Spring, when social media was still in its early years and Egypt, Tunisia and other countries in the Middle East faced bloody uprisings that were broadcast on social media, headlines declared the movements “Twitter Revolutions” and experts debated about just how important a role social media played in the events. Ten years later, there is no question that social media and private chat platforms have become an essential organizing tool. Restricting them, in turn, is a routine move to suppress dissent. Internet service was disrupted in Cali, Colombia during May anti-government protests.

This year has also seen disruptions in Armenia, Uganda, Iran, Chad, Senegal and the Republic of Congo.

But authoritarian regimes aren’t the only ones getting into the act. India routinely shuts down the internet during times of unrest. Toker of NetBlocks said the imposition of internet restrictions in Cuba follows an emerging global pattern and not always in the countries you most expect them, such as a recent Nigerian cutoff of Twitter. On the plus side, he said, the world is much more aware of these incidents because it’s easier to monitor and report them remotely.

On Sunday, all of Cuba went offline for less than 30 minutes, after which there were several hours of intermittent but large outages, said Doug Madory of Kentik, a network management company. He said large internet outages were very rare in Cuba until very recently.

“There was an outage in January just for mobile service following the ’27N’ protests,” Madory said, referring to a movement of Cuban artists, journalists and other members of civil society who marched on the Ministry of Culture on Nov. 27, 2020, demanding freedom and democracy.

Henken said he doesn’t believe the government would shut off access for an extended period of time, even though that is its go-to tactic for dissidents and activists.

“The problem they have now is that it’s not a handful of activists or artists or independent journalists — it’s now a massive swath of the population all throughout the country,” he said. “So the genie is out of the bottle. They’re trying to put it back in.”