Billionaire Richard Branson reaches space in his own ship 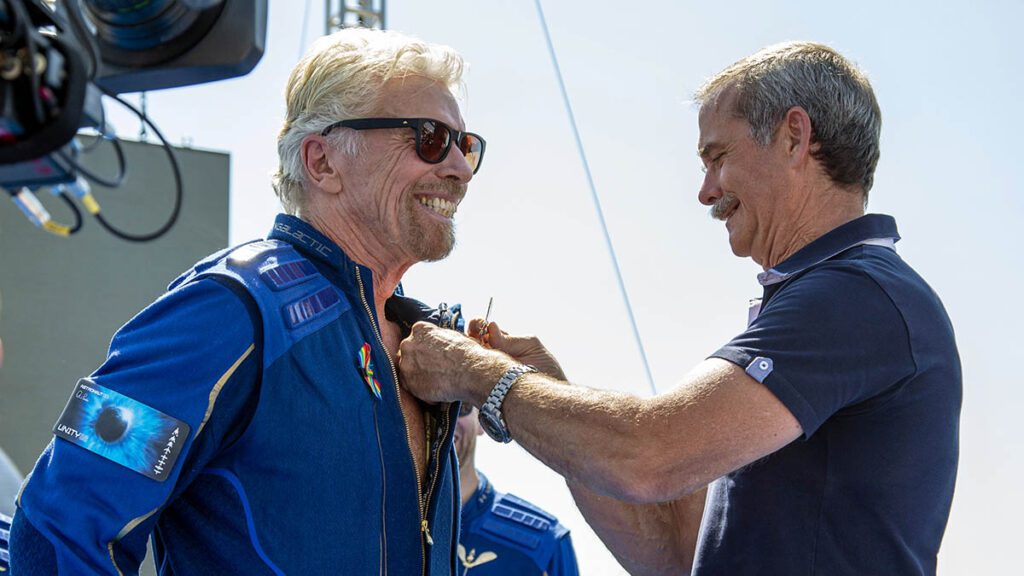 Swashbuckling billionaire Richard Branson hurtled into space aboard his own winged rocket ship Sunday, bringing astro-tourism a step closer to reality and beating out his exceedingly richer rival Jeff Bezos.

The nearly 71-year-old Branson and five crewmates from his Virgin Galactic space-tourism company reached an altitude of 53.5 miles (86 kilometers) over the New Mexico desert — enough to experience three to four minutes of weightlessness and witness the curvature of the Earth — and then glided back home to a runway landing.

“The whole thing, it was just magical,” a jubilant Branson said on his return aboard the gleaming white space plane, named Unity.

The brief, up-and-down flight — the space plane’s portion took only about 15 minutes, or about as long as Alan Shepard’s first U.S. spaceflight in 1961 — was a splashy and unabashedly commercial plug for Virgin Galactic, which plans to start taking paying customers on joyrides next year.

Branson became the first person to blast off in his own spaceship, beating Bezos, the richest person on the planet, by nine days. He also became the second septuagenarian to go into space. Astronaut John Glenn flew on the shuttle at age 77 in 1998.

Bezos sent his congratulations, adding: “Can’t wait to join the club!” — though he also took to Twitter a couple of days earlier to enumerate the ways in which be believes his company’s tourist rides will be better.

With about 500 people watching, including Branson’s family, Unity was carried aloft underneath a twin-fuselage aircraft. Then, at an altitude of about 8 1/2 miles (13 kilometers), Unity detached from the mother ship and fired its engine, reaching more than Mach 3, or three times the speed of sound, as it pierced the edge of space.

Spectators cheered, jumped into the air and embraced as the rocket plane touched down on Earth. Branson pumped his fists as he stepped out onto the runway and ran toward his family, bear-hugging his wife and children and scooping up his grandchildren in his arms.

Mike Moses, a top executive at Virgin Galactic, said that apart from some problems with the transmission of video images from inside the cabin, the flight was perfect, and the ship looked pristine.

“That was an amazing accomplishment,” former Canadian astronaut Chris Hadfield, a one-time commander of the International Space Station, said from the sidelines. “I’m just so delighted at what this open door is going to lead to now. It’s a great moment.”

The flamboyant, London-born founder of Virgin Atlantic Airways wasn’t supposed to fly until later this summer. But he assigned himself to an earlier flight after Bezos announced plans to ride his own rocket into space from Texas on July 20, the 52nd anniversary of the Apollo 11 moon landing. Branson denied he was trying to outdo Bezos.

Branson’s other chief rival in the space-tourism race among the world’s richest men, SpaceX’s Elon Musk, came to New Mexico to watch and congratulated Branson for a “beautiful flight.”

Bezos’ Blue Origin company intends to send tourists past the so-called Karman line 62 miles (100 kilometers) above Earth, which is recognized by international aviation and aerospace federations as the threshold of space.

But NASA, the Air Force, the Federal Aviation Administration and some astrophysicists consider the boundary between the atmosphere and space to begin 50 miles (80 kilometers) up.

The risks to Branson and his crew were underscored in 2007, when a rocket motor test in California’s Mojave Desert left three workers dead, and in 2014, when a Virgin Galactic rocket plane broke apart during a test flight, killing one pilot and seriously injuring the other.

Ever the showman, Branson insisted on a global livestream of the Sunday morning flight and invited celebrities and former space station astronauts to the company’s Spaceport America base in New Mexico. R&B singer Khalid performed his new single “New Normal” — a nod to the dawning of space tourism — while CBS “Late Show” host Stephen Colbert served as master of ceremonies.

Before climbing aboard, Branson, who has kite-surfed the English Channel and attempted to circle the world in a hot-air balloon, signed the astronaut log book and wisecracked: “The name’s Branson. Sir Richard Branson. Astronaut Double-oh-one. License to thrill.”

But asked afterward whether he is planning any more adventures, Branson said he will “definitely give it a rest for the time being” because “I’m not sure it would be fair to put my family through another one.” He said he thinks he holds the record for being pulled out of the sea five times by helicopter.

Virgin Galactic already has more than 600 reservations from would-be space tourists, with tickets initially costing $250,000 apiece. And upon his return to Earth, Branson announced a sweepstakes drawing for two seats on a Virgin Galactic jaunt. Blue Origin is waiting for Bezos’ flight before announcing its ticket prices.

Kerianne Flynn, who signed up in 2011 to fly with Virgin Galactic, had butterflies ahead of the launch Sunday.

“I think there’s going to be nothing like going up there and looking back down on the Earth, which is what I think I’m most excited about,” she said. She added: “Hopefully the next generations will be able to explore what’s up there.”

Blue Origin and Musk’s SpaceX both fly Apollo-style, using capsules atop rockets, instead of an air-launched, reusable space plane.

SpaceX, which is already launching astronauts to the space station for NASA and building moon and Mars ships, plans to take tourists on more than just brief, up-and-down trips. Customers will instead go into orbit around the Earth for days, with seats costing well into the millions. The company’s first private flight is set for September.

Musk himself has not committed to going into space anytime soon.