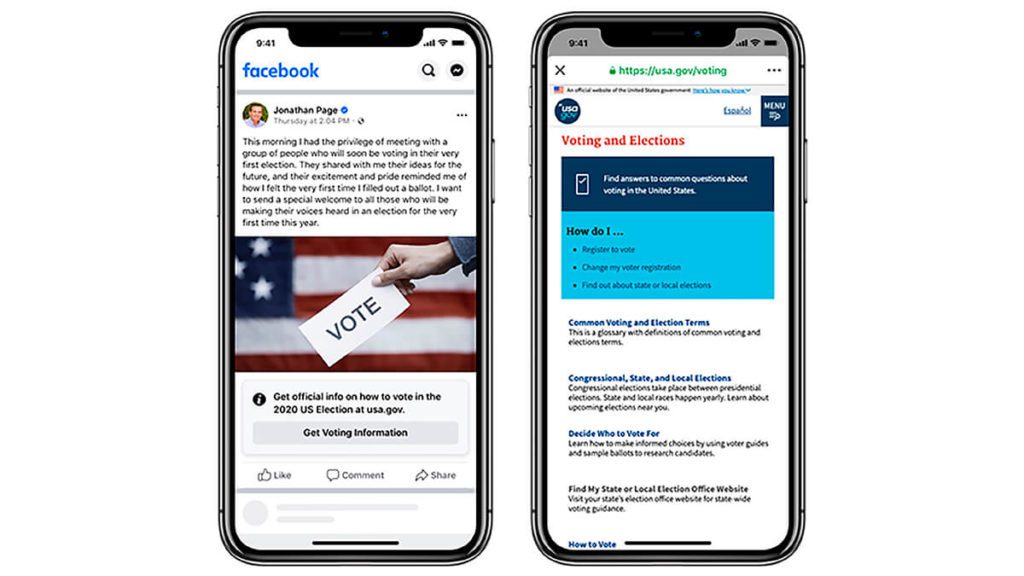 OAKLAND, Calif. (AP) — Facebook has started adding informational labels to all posts about voting by federal elected officials and candidates in the U.S., as it said it would do. But the move appears to be sowing confusion rather than dispelling it.

This week, the social network applied labels to posts by President Donald Trump and by Joe Biden, the presumptive Democratic presidential nominee, among others. The simple labels read “get official voting info” and direct people to a hub with information from authoritative election sources such as state and local officials.

The intention, as Facebook laid it out in late June, was to provide links to unbiased information about when and how to vote on election-related posts. Instead, though, they’re being misinterpreted — in some cases as an endorsement of misleading or false claims.

Trump’s Tuesday morning Facebook post read: “Mail-In Voting, unless changed by the courts, will lead to the most CORRUPT ELECTION in our Nation’s History! #RIGGEDELECTION.” Facebook’s label, placed under the post, says “Get official voting info on how to vote in the 2020 US Election at usa.gov” and directs people to the government website’s section on absentee and early voting and voting amid the pandemic.

Meanwhile, Facebook labeled at least two Biden posts in 24 hours. In one, the former vice president put “the Kremlin and other foreign governments on notice” about interfering in U.S. elections. Another asked for donations, noting that “it may be hard to believe, but we have just over 100 days until Election Day.”

“There is inherently no problem with Facebook deciding to add labels to all posts about elections and voting,” said Nina Brown, a professor at Syracuse University who studies misinformation. But Facebook “missed the opportunity to do so in a clear and meaningful way.”

When it announced the rollout of the labels last week, Facebook said they are not a judgment “of whether the posts themselves are accurate, but we want people to have access to authoritative information either way.”

That may be the problem, Brown said.

“Facebook is so reluctant to be seen as weighing in on an issue or as favoring one politician or another,” she said. “So instead of just false posts, it will label all posts. But social media users are not used to seeing flags on content that is not problematic.”

When Twitter labeled a post about mail-in voting by Trump — earning the president’s ire — it looked like a warning label, one punctuated with a circled exclamation mark and reading, “Get the facts about mail in ballots.” Rather than label every politician’s tweet about voting, Twitter is only doing it with those that are false or misleading. This, Brown said, had the intended effect.

Facebook, meanwhile, has “tried to act as this neutral arbiter,” she said, adding that it may ultimately do more harm than good.

Further adding to the confusion, Facebook also announced in June that it will start labeling all “newsworthy” posts from politicians that break its rules, including those from Trump. But that’s a different label, not the one on election posts, which do not currently break Facebook’s rules, even if they are false.