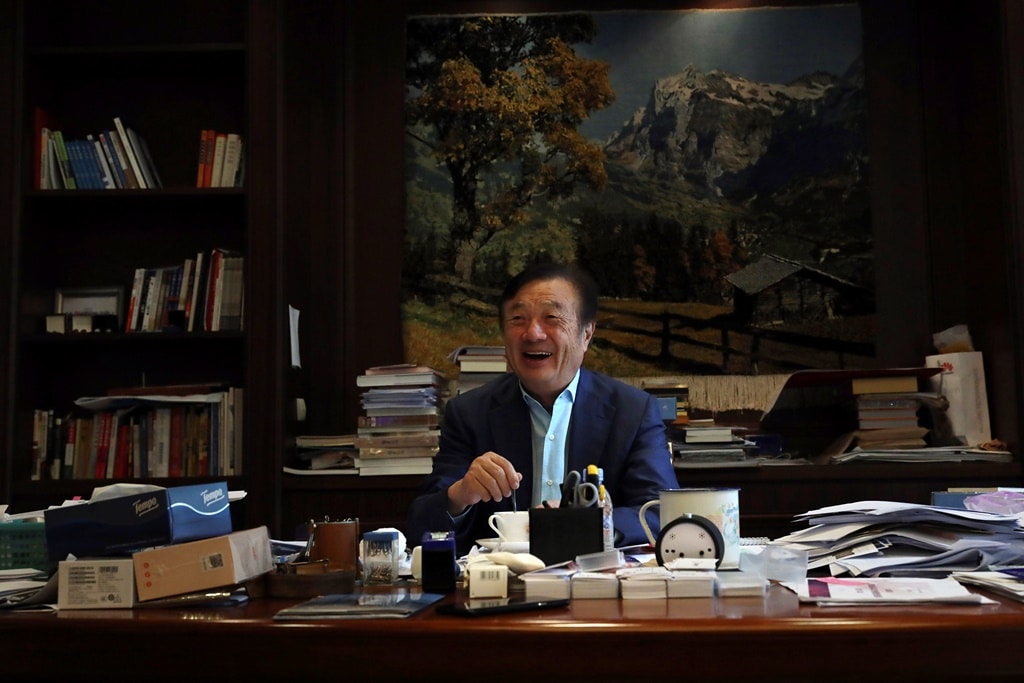 SHENZHEN, China (AP) — For decades, Huawei’s founder stayed out of sight as it grew to become the biggest maker of network gear for phone carriers and passed Apple as the No. 2 smartphone brand.

Now, Ren Zhengfei is shedding that anonymity as China’s first global tech brand mobilizes to fight back against U.S. sanctions and warnings Huawei Technologies Ltd. is a security risk.

The entrepreneur at the center of the Trump administration’s battle with Beijing over technology is a survivor of competition that drove Western rivals out of the market, brushes with financial disaster and job stress so severe he contemplated suicide.

The 75-year-old former army engineer who worked his way out of childhood poverty sees American pressure as just the latest of the tests that have hardened him and his company.

“For three decades, Huawei has been suffering and no joy,” Ren said in an interview. “The pain of each episode is different.”

This episode has a personal dimension: Ren’s daughter, Huawei’s chief financial officer, is under arrest in Canada on U.S. charges she helped to violate sanctions against Iran.

The escalating clash with Washington has transformed Ren from an admired but rarely seen businessman worth an estimated $3 billion into one of China’s most prominent figures.

He belongs to the generation of entrepreneurs who founded communist-era China’s first private companies in the 1980s. They navigated a shifting, state-dominated landscape, overcoming shortages of money and technology to create industries that are expanding abroad.

Ren launched Huawei in 1987 after his military post was eliminated.

Huawei is a star in industries the ruling Communist Party is promoting but a target for complaints those plans are based on stealing or pressuring foreign companies to hand over business secrets.

Despite his success, Ren talks like a struggling rookie, worrying aloud that employees might get too comfortable.

As for “whether his character can help the company to survive,” said Peng, “I’m sure it will. It will survive. Like he said, they are prepared for it. They know there is always difficulty.”

When Ren was a teenager, the ruling party embarked on the Great Leap Forward, a disastrous campaign to become an industrial power overnight. At least 30 million people died in the 1959-61 famine that followed.

Ren’s mother declared no one would die and divided each meal into nine portions, one for each family member, said Tian Tao, co-author of “The Huawei Story.”

“His mother’s ‘meal system’ had a big impact on him,” said Tian.

Following that ethos, Huawei says it is owned by the Chinese citizens who make up half its workforce of 180,000. Ren’s ownership has declined to 1.14% as more shares are distributed to employees.

Ren joined the army in the 1960s and was sent to the northeast to build a textile factory. He said he slept outdoors in weather as cold as -28 C (-18 F) and ate noodles and pickled radish.

Ren says he has tried to ensure Huawei’s long-term survival through a system of shared decision-making. Still, he is known as a forceful, even autocratic, decision-maker.

That was highlighted by a battle in 2000 over whether to develop the personal handy-phone system, which caught on as a low-cost alternative to mobile service. Ren rejected PHS as a distraction from work on next-generation mobile technology that promised to be cheaper and more reliable.

Ren said he resisted appeals to back PHS as bills for 3G development rose to 6 billion yuan ($750 million).

“Today’s crisis is one-tenth or 1% of the pressure at that time,” Ren said.

Tian, his biographer, said Huawei employees told him Ren, unable to sleep, would call and worry aloud about how to pay a 300 million yuan ($50 million) monthly wage bill.

“When Ren Zhengfei talked with employees six or seven years ago, he revealed a secret: He had suicidal thoughts several times,” said Tian, a Huawei adviser and co-director of the Ruihua Innovation Research Institute at Zhejiang University.

Ren gives interviews lasting up to two hours to reporters and TV crews who trek to Shenzhen, a former fishing village near Hong Kong that is now a technology center of 15 million people.

Ren, a ruling party member, tried to defuse security concerns by promising in January he would defy any official demands to reveal foreign customers’ secrets.

Huawei, along with Nokia Corp. and LM Ericsson, leads in fifth-generation telecom technology. It is meant to upgrade and expand networks to support self-driving cars and other futuristic applications. But that increased reach makes 5G politically sensitive.

The company’s U.S. market vanished in 2012 after a congressional panel declared Huawei a security risk.

Despite that, sales tripled as Huawei made inroads into Europe, Asia and Africa. Sales last year rose almost 20 percent to $105 billion.

U.S. export controls, if enforced, will disrupt Huawei’s access to processor chips and other technology. Its smartphones would lose Google maps and other services, making it hard to compete.

To limit that impact, Ren has emphasized making Huawei a self-reliant technology creator. This year’s research spending is due to rise 20% to $17 billion.

The company has released a smartphone operating system it says can replace Google’s Android if necessary. It makes some of its own processor chips but needs U.S. suppliers for high-end products.

“They do things from scratch,” said Peng. “I think this is the influence of the founder.”