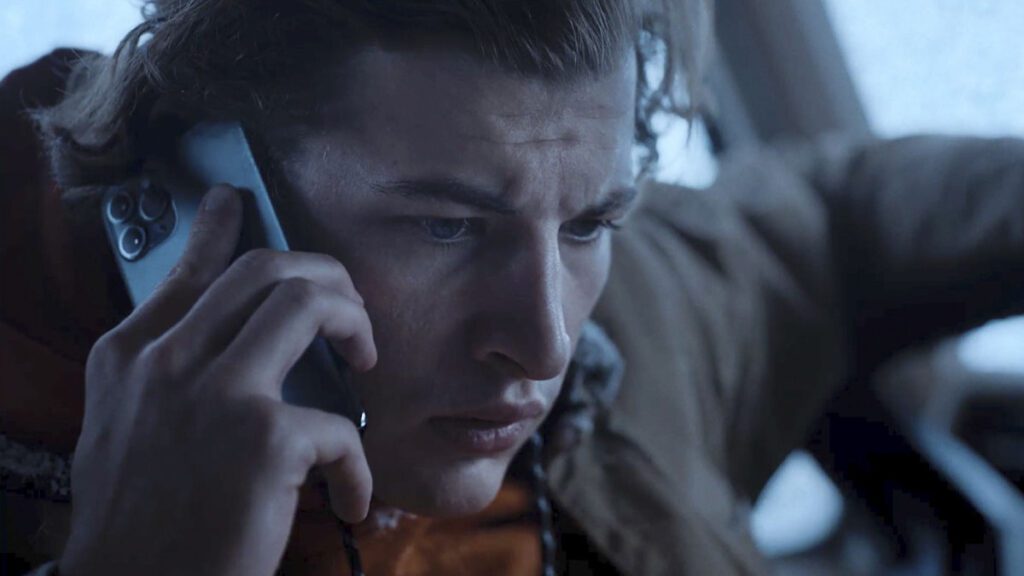 Published: September 18, 2020 by Inside Telecom Staff

NEW YORK (AP) — Most directors insist on having final edit approval of their films. Not the creators of “Wireless.”

The series on the mobile-platform Quibi employs an ingenious way to tell a story on a smartphone: You see different things on the screen depending on whether you hold your phone vertically or horizontally.

Horizontally, a traditional cinematic film follows a college student navigating the snowy Colorado mountains. But flip your phone vertically and you see his smartphone as he scrolls through photos, checks the map or calls his mom.

That means that the viewer becomes the editor. And each viewer sees a slightly different film, depending on at what points they rotate the phone.

“You’re never going to have the same experience as somebody else watching the show,” said Zach Wechter, the director, co-creator and co-writer. “It really is in our viewers’ hands when they’re going to turn the phones at any given moment.”

The 10-episode series that launched this week has the backing of director Steven Soderbergh, an eager adopter of nascent technology whose influential films include “Sex, Lies and Videotape” and “Traffic.”

He signed on to be an executive producer after seeing “Pocket,” a short film by Wechter and his creating partner Jack Seidman that experimented with the two-screen technology.

“It was the first thing I’d ever seen that I felt was designed to be watched and experienced on the phone and absolutely worked,” Soderbergh said.

The show signals a technological jump for Quibi, which launched during the pandemic offering mobile-friendly installments of movies and TV in 10 minutes or less.

The platform initially got fewer subscribers than hoped, despite landing celebs like Chance the Rapper, Chrissy Teigen and Jennifer Lopez. Even so, it heads into the weekend Emmy Awards with an impressive 10 nominations.

The technological leap with “Wireless” means it waves goodbye to passive entertainment. By letting viewers rotate their phones and choose their perspective, Wechter is empowering the audience, letting them feel like they’re controlling the story.

“I’d like to think that our project is something that will inspire filmmakers and artists to consider the possibilities of this new frontier — a new landscape for storytelling,” Wechter said.

“Wireless” stars Tye Sheridan as a college student with an unhappy past and a secret habit who is driving to a New Years Eve’s party to try to rekindle a relationship with his ex-girlfriend.

As he drives over the mountains, we watch what he does on his phone: Scrolling through Instagram, checking maps, firing up Tinder, texting friends, asking Siri questions and cuing up the band Brockhampton on the stereo. The human in horizontal mode and the technological on vertical are fused.

The filmmakers have so seamlessly integrated the phone-in-the-phone that our hero listens to his old voicemail messages and looks at photos from happier times to give context for his emotions. They’ve even created a fake, chirpy online commercial for a fictional vehicle, the Chevy Colorado.

Wechter said he was inspired to create the show based on how much time everyone spends on their phone these days, and says we have almost an emotional relationship with our devices. Soderbergh agrees, calling them “an additional appendage.”

“I think the ubiquity of smartphones is one of the most impactful parts of our lives nowadays,” Wechter said. “It really just was birthed out of realizing how essential these devices have become in our day-to-day lives.”

Soderbergh laughs that filmmakers these days are lamenting how putting their work on a phone is a depreciation of their work. “This is a complete inversion of what you typically hear a filmmaker say: To experience it NOT on your phone would be a diminishment.”

He hopes viewers will watch the thriller and then re-watch it, flipping their phone for more looks at the in-screen phone during the second time or focusing more on the actor’s perspective. “I hope other people will seize on the ability to do their own edits.”

In an interesting twist, Andie MacDowell, who starred in the indie “Sex, Lives and Videotape” 31 years ago, voices the college student’s mom in this Quibi show. Soderbergh laughs at the old technology of that film, which used video confessionals. “Think about how quaint that seems,” he said. “It’s like a Jane Austen novel compared to what we are experiencing now.”