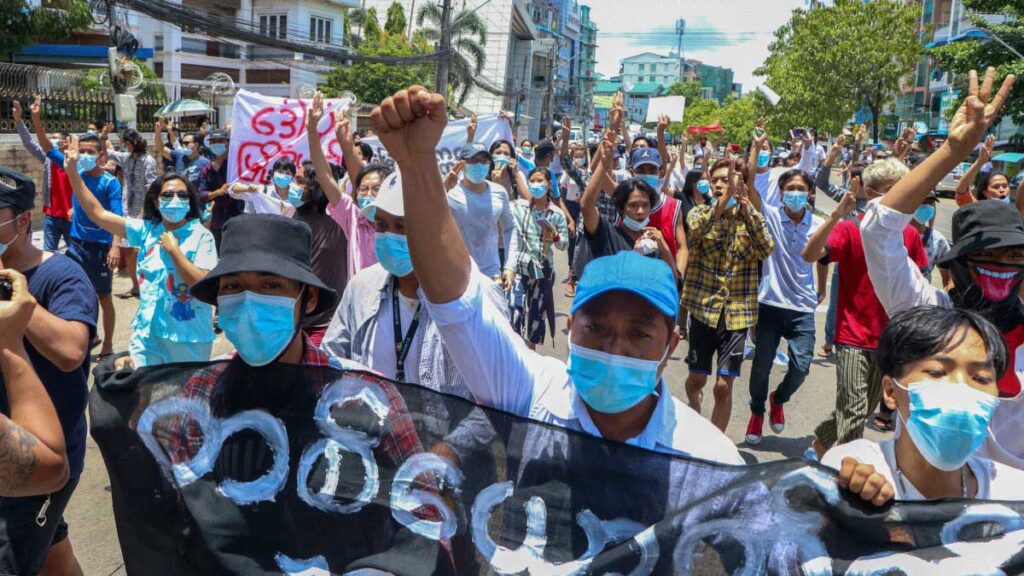 Myanmar’s military rulers are seeking to limit access to the internet to an internal network of only “whitelisted” sites to quash opposition to their seizure of power, according to a report by the International Crisis Group.

It likened the internet to a “virtual battlefield” where the military is struggling to gain an edge because it lacks technological capacity, while social media companies like Facebook have banned military officials and many government agencies.

The report released Tuesday noted a narrowing of the leeway for online dissent and abuses of social media to spread hatred toward minority Muslim people in western Myanmar’s Rakhine under Aung San Suu Kyi,’s elected government, which was ousted in a Feb. 1 coup. Since then, authorities have imposed nightly internet outages and sought to limit access to social media platforms.

International telecoms companies such as Norway’s Telenor and other businesses have protested the moves, which they say are crippling business activity and have undone years of progress toward integrating Myanmar into the world economy.

The coup interrupted a faltering, decade-long move toward a civilian, democratically elected government after decades of military rule that began soon after the country, also known as Burma, gained independence from Britain.

It incensed a generation of young Myanmar people who grew up in relative freedom, with access to cell phones, social media and the internet as the country leapfrogged into the mobile age, with heavy reliance on internet services commonly found in wealthier countries.

The junta has ordered mobile operators and internet service providers to restrict access to certain websites and virtual private networks, or VPNs, that can skirt internet filtering. It is gradually ramping up shutdowns, limiting access to only fiber data connections which are available to only a fraction of the population.

Many tech-savvy young people are involved in the civil disobedience movement against the coup and the military lacks the sort of capabilities that China has developed over the past several decades, enabling it to police the internet and ban access to certain sites, the International Crisis Group report says.

So instead the military, also known as the Tatmadaw, is developing an “intranet” for inside the country that allows mobile access only to approved, or “whitelisted” applications, it says. Those might include online banking, for example.

That “inevitably limits its ability to offer anything more than the most basic services, with a major impact on the economy,” the report says.

Last week, Telenor, which is the only Western mobile carrier in Myanmar, issued a statement objecting to such trends.

“Myanmar’s superior connectivity was built on the combined experience of almost all other countries: Open internet access fuels growth. Whitelisting is a practice that will not give the same benefits – and should be abandoned,” Telenor said.

It noted an estimate by KPMG that the expansion of access to mobile and internet communications had boosted Myanmar’s economic growth by more than 5%.

Telenor recently announced it was writing off the value of its business in Myanmar, worth about $780 million. But it said it did not plan to withdraw and was still adding subscribers.

Myanmar authorities appear to be finalizing details of a draft cybersecurity law that foreign businesses and other groups contend would increase risks of doing business there.

The International Crisis Group’s report urged companies and governments to ensure they are not abetting the military’s efforts to control the internet and suppress opposition.

Governments should meanwhile step up arms embargoes to prevent supplying dual civilian-military use of technologies that can be used to suppress political dissent, it said.