A Closer Look at the Honor 70

Published 4 Weeks Ago on Wednesday, Aug 31 2022
By Mohamad Hashisho 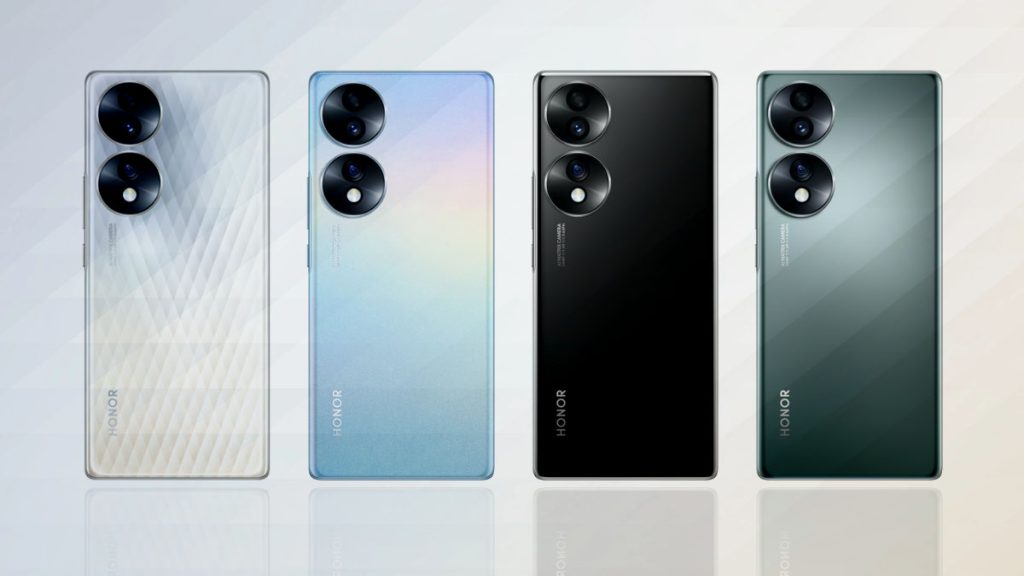 The Honor 70 has a lot to offer, with loads of attractive specs. The display is fantastic, and its camera could be the main selling point with its promising potential. The Honor 70 has a couple of unique features as well. Classed as a mid-ranger, it can still face some competition with cheaper competitors. As a first impression, it is not bad, but let us look closer.

At first look, you might feel that the Honor 70 looks familiar. Two cameras sit on the back of the phone. Reminiscent of the Honor 50 and 60. Honor is bringing different touch in the finish to the rear. The Crystal Silver version offers a light refracting diamond effect and a metallic shimmer.

It’s unique, although many might find this finish too much for their taste.

The phone also comes in traditional black, shiny green, and Icelandic Frost, which provides a cold touch with an iridescent effect. The viability of these colors may vary, but for now, black is the biggest seller. The Honor 70 is only 7.9mm thick, and its curved edges make this fact even more impressive. Not everything is at a flagship level on the Honor 70, though. The phone has a plastic frame, even if it looks like metal. Plastic has a cheap feeling attached to it, and with no IP68 dust and water resistance, this reminds us of the mid-range aspect of the phone.

The Honor 70 is rocking a 6.67-inch OLED full HD+ panel. A little smaller than its flagship counterpart, the Honor Magic 4 Pro. With a 120hz refresh rate, your content viewing and browsing experience will be at its smoothest. The curved edges of the display are rare, which makes the Honor 70 unique. Many brands use flat displays because they are preferred for gaming since they offer more responsiveness. These edges make the display look more relaxed and improve the phone holding experience. The fingerprint sensor is tucked under the display, and the selfie camera has a punch-hole design.

The Honor 70 camera performance is excellent. This seems like it’s the area you’ll pay the most for. With the Sony IMX800 sensor, the camera delivers on the expected promises. It remains a big sensor with an f/1.9 aperture and a 54-megapixel resolution. Typically, it uses pixel binning to capture more light and deliver better photos. The other camera is a 50-megapixel ultra-wide camera with macro functions, which means the Honor 70 did not use a separate macro camera lens which is a breath of fresh air.

It has an HONOR Image Engine. The computational software that made the Honor Magic Pro so good. The algorithm doesn’t just boost photos. It also helps with the new camera mode: Solo Cut. A feature that tracks the subject and makes sure it stays in focus.

However, its asking price of 479 pounds might be a negative point. Cheaper alternatives offer the same chipset, which might make you consider your options. A 4800mAh battery is relatively typical for a device that size. The 66W charger, on the other hand, is a welcomed surprise on a midrange offering a 60 percent charge in as little as 20 minutes. Sadly, no wireless charging is supported even though competitors such as Nothing made it a big deal.

The Honor 70 comes with Android 12 straight out of the box.

It is running Magic UI 6.1 on top of stock android. It can be heavy customization to the stock android experience even though it is excellent and supports Google services. Lots of duplication and rearrangement of how the UI works aren’t always for the better. It might be too early to judge. With many software updates set to launch, the whole experience might be upgraded. The Honor 70 promises two Android OS updates and three years of security updates.

We should not ignore Honor, especially since most people aren’t talking about it much after its split with the giant, Huawei. The solo phone maker wants to create its own identity by bringing the latest Sony camera sensor and combining it with a large, curved screen. With a very light build and full google services access, the Honor 70 is shaping up to be a solid pick and will surely take its place as an important name in the market.