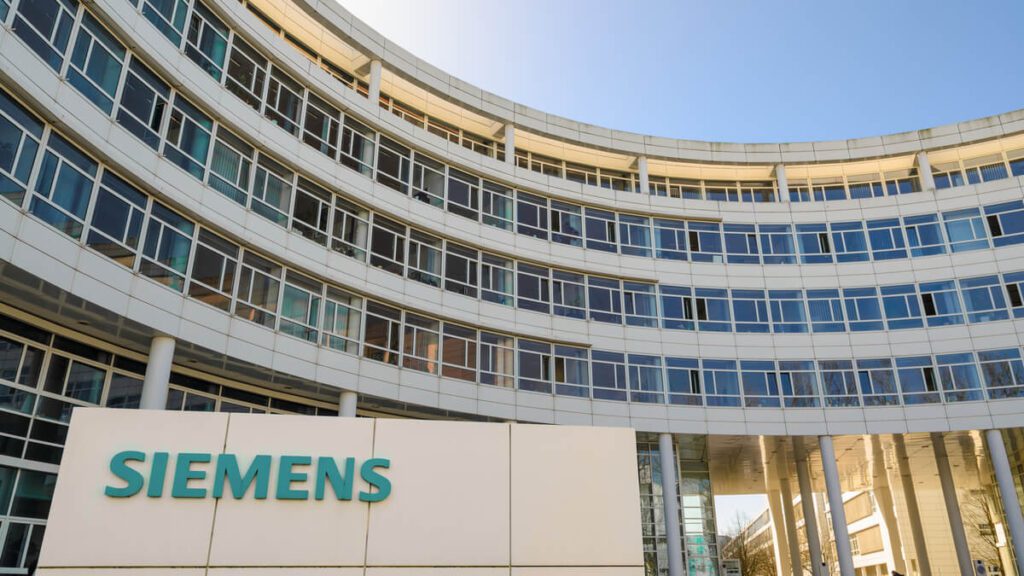 As the world increasingly focuses attention on climate change, Roland Busch, the CEO of Siemens AG, says his company is well-positioned to help manage the challenges.

Munich-based Siemens specializes in making buildings, factories and railroads more efficient through digitalization and automation. And its medical unit includes technology that could lead to faster treatments for stroke patients.

Siemens has predicted 5% to 7% annual revenue growth for the next three to five years, based largely on its expectation that demand for its products involved in energy efficiency will steadily increase. Siemens’ stock is up roughly 14% this year. And 13 of 21 industry analysts who follow it give the company a buy rating, according to FactSet.

Busch, who became CEO in February, has been with Siemens for more than a quarter-century.

The Associated Press spoke recently with him about energy savings, manufacturing efficiencies, medical imaging and the the future of rail travel. The interview was edited for clarity and length.

Q: The United States and other countries are emphasizing efficient buildings as one way to fight climate change. Is that what’s fueling much of your growth predictions?

A: We talked about our core markets, 440 billion euros, growing 4% or 5%. These are already markets driven by sustainability as well as automation and digitalization, which is, I think, where all the stimulus money goes. Why would you invest in old stuff when you really can stimulate the new? Your new administration has clear targets to expand or defend technology leadership against others, eventually China. We can contribute. We have very strong software business in the United States. A very strong footprint in building technologies.

Q: How would a consumer benefit from factory automation?

A: Let me start with the automotive industry. If you are building a combustion engine and a hybrid-electric battery vehicle at the same factory, you have to manage all the variants as products are personalized. We help with either the software of the automation or the personalization (with many combinations of options). A second example is what we do in terms of pharmaceutical. We help them bring the vaccinations to market in shorter time, but also ramp up faster. A new mutant comes, a new kind of vaccination is needed, to make it fast. One day you produce a vaccination for COVID, another one for whatever kind of disease you want to fight.

A: You create a digital twin of your products. You’re simulating what your products look like. GSK is a pharmaceutical company that provides raw material to vaccination providers. They have to do a lot of tests and different mixes. We simulated that with them, so they could really shorten time to market by 20% or even more. We make a different twin of your manufacturing and look at how to get rid of bottlenecks in assembly lines, how to automate manufacturing. Once you simulate it, you don’t need to try it and change it again. You do it right the first time, wrap up your manufacturing fast.

Q: How does Siemens make a building more efficient?

A: Something like 70 percent of the energy consumption is still in buildings. Heat goes through the roof. If you cover your roof properly, most of the job is done. You have automation technology, which is using every device that you have in a smarter way. The next big thing is the decentralized energy system. You combine it with rooftop photovoltaic (solar cells), eventually a (natural) gas engine, which provides energy for a campus with a lower energy footprint. Battery storage, fitting the whole thing with renewables. It’s meaningless to cool a building if there’s nobody in it. We have a software company which is managing buildings. You just gear it for the needs of the people who are currently in the room or who are going to be in the room.

Q: You make high-speed rail and transit system rail cars. Do you see growth, given decreased mass transit ridership due to the coronavirus?

A: Operators who run public transport see this whole thing coming back as life gets normal. It’s a problem currently but that will fade away. Any large city without public transport, it will not function. We discussed whether we would put money into the next generation of high-speed trains. We have prototypes running. This may be one of the finest trains Siemens has ever built. It runs about 300 kilometers (186 mph) an hour. It has the highest efficiency. It has an aerodynamic profile. It works with different propulsion systems, is lightweight. Eventually you will see less and less national cities connected by flights. Wherever you have a good one-to-one connection with a high speed train, you can eliminate flights totally. We have a good business, globally. I do believe that has a good future.

Q: You’ve said you can use medical imaging to cut stroke treatment costs in half. How would you do that?

A: There are some cities where if you have a stroke, you’re better off. A person has a stroke, so an ambulance comes, brings you to a hospital. You get a scan. Then you need a specialist for surgery. Very often the person doesn’t sit at the hospital closest to where the person has a stroke. So you either put the person in a helicopter or you fly the surgeon to the hospital. This takes another half an hour, hour. If every second counts, that’s a problem. A startup we acquired is doing high-precision surgery by joystick. One hundred miles apart, you have the best surgeon working with good equipment, which also ensures that you have a very precision movement. That cuts the time substantially. I think they are working on getting an approval for some of the procedures. It will take a couple of years.