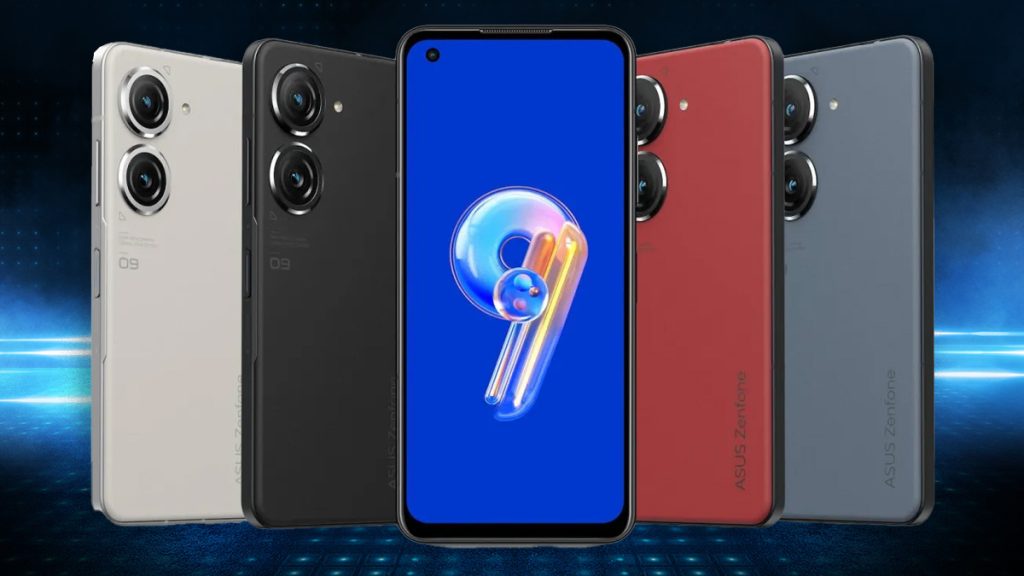 It is often said that good things come in small packages. In whatever context that may be, it is the case with the ASUS Zenphone 9. Only a little bit smaller than the Zenfone 8, it adds a larger camera sensor, larger battery, a larger Personal Video Collaboration Software (VC) for the CPU, and other major features that make the handset worth looking into.

The ASUS 9-series phone is among the smallest Android flagships on the market at 146.6 x 68.2 x 9.5mm and 165g. Despite its size, it’s no pushover of a smartphone. It has the latest Snapdragon 8+ Gen 1 CPU as its power source, and Asus replaced the Zenfone 8’s heat pipe with a large vapor chamber to keep it cool.

The three available memory options are 8/128GB, 8/256GB, and 16/256GB (LPDDR5 RAM and UFS 3.1 storage). Just as in the last iteration of the Zenphone, there is no microSD card slot. The ASUS Zenphone 9 will continue to receive security upgrades for two years at the very least, as well as two major OS updates.

Aluminum is used to make the body’s mid-frame. The polymer material built for the rear is both shatter and scratch-resistant, more so than the materials used for previous versions, making the Zenphone a hefty object to old and a sturdy device. The phone’s front is protected with Gorilla Glass Victus and has an IP68 rating for water and dust protection so that you can take it on a hike or to the beach without too much worry.

In order to always deliver a high-quality image, Asus calibrated the screen at two different brightness levels (average deltaE 1). The panel covers 151.9 percent of sRGB and 112 percent of DCI-P3. Both a DC dimming at low light levels and an ‘Always On’ mode are supported.

The Zenfone 9’s cameras make use of three Sony sensors. The IMX766 50MP (1.56 “, 1.0 m pixels) is mounted in the camera’s main module on the back. This module’s 6-axis hybrid gimbal stabilizer is three times more effective than an ordinary Optical Image Stabilization (OIS). Despite the lack of a telephoto lens on this phone, the IMX766 can do a 2x lossless zoom (at 16MP resolution) and a 12MP IMX363 (1/2.55”) ultra-wide module with a 113° field of view. The backup camera is (, 1.4m). The ASUS phone also features powerful Electronic Image Stabilization (EIS) for hyper-steady stabilization and focussing, enabling macro photography (up to a distance of 4 cm). The primary camera has EIS and can shoot video at 8K 24 fps and 4K 60 fps.

Because Asus takes audio seriously, it integrated Dirac tuning with hardware in the Zenphone 9. On board, there are two speakers. The top one is a 3-magnet speaker, and the lower one has a 7-magnet design (12x16mm) (10x12mm). There is a Qualcomm Aqstic amp in each Qualcomm (WSA8835). There is a 3.5mm headphone jack on board, but aptX HD and Adaptive, as well as LDAC and AAC, are supported if you’d rather go wireless. A 10-band equalization and four Dirac audio types are available to you. To achieve the optimum audio quality from the phone and headphones, specialized setup data is provided for the majority of Asus headphones.

The ASUS Zenphone 9 battery is fairly substantial, as promised, and has 300mAh higher capacity than the Zenfone 8 battery at 4,300mAh (also, the similarly-sized Galaxy S22 has a 3,700mAh battery). You have the option to set the maximum charge at either 90 percent or 80 percent, giving you the discretion to not utilize it all. The latter will lessen battery deterioration, which will be 7 percent rather than 15 percent after 500 cycles.

You still have options for the battery. The phone has a built-in 30W HyperCharger that supports USB Power Delivery 3.0 PPS. However, you may choose between Steady and Ultra Steady modes to lower the charge power to 18W or 10W, respectively. This brings down the temperature and lengthens the battery’s life. A 90-minute phone conversation, hundreds of texts, an hour of gaming, a few photographs and videos were taken each day, and streaming music for almost an hour are all included in the nearly two days of battery life that Asus advertises.

The fingerprint scanner on the ASUS Zenphone 9 is now located on the side of the device rather than beneath the display. As a result, it may function as a smart button. By swiping up or down, for instance, you may scroll to the top or bottom of the page. For a long press or a double press, you may also specify custom actions.

With Game Genie, the phone emulates the ROG strategy. Suppose you need to reply to notice or check anything. In that case, you may prevent notifications but also have any app hovering above the game, so you don’t accidentally answer your mother’s messages when you meant to shoot your opponent in PUBG.

The Genie may display information such as game frame rates, predicted battery life, system temperatures, and more. If necessary, it can also remove background programs from RAM to amplify performance. It can assist you with a macro feature that can automate a difficult series of touch operations, and it includes an integrated screen recorder to record your gaming for you aspiring streamers out there.

Asus has created a retail packaging that is superior to the norm. The 30W HyperCharge adapter, cord, and bumper case are included. The packaging is non-adhesive and consists of recyclable paper printed with soy ink.

The ASUS Zenphone release date was officially on the 28th of July, 2022. It will be available for purchase in a number of countries, including the US, Canada, UK, Singapore, Hong Kong, and Taiwan. The suggested retail price for the Zenphone 9’s base 8GB/128GB variant in the US is $699, while the pricing for the same model in Europe is €799 at launch.

There is currently no Flip model. However, there is the ROG Phone 6 if you want something bigger.

Much like the Rog Phone 6, the ASUS Zenphone 9 also comes with a variety of accessories, although not as much variety as of yet. The phone comes with the Connex accessories set, a collection of cases that enable accessories to be added to them, such as a kickstand that is set up to open YouTube automatically (you can change to a different app from the settings). The Connex Card Holder is another option; it holds business cards.

The Smart Backpack Mount is another option. This fastens to the backpack’s shoulder strap and, with the help of a magnetic base, holds your phone stable so you can use it as an action camera. The phone is on a retractable lanyard, so you can pull it out, use it, and then let it travel back to your shoulder if you need to check the map or whatever.