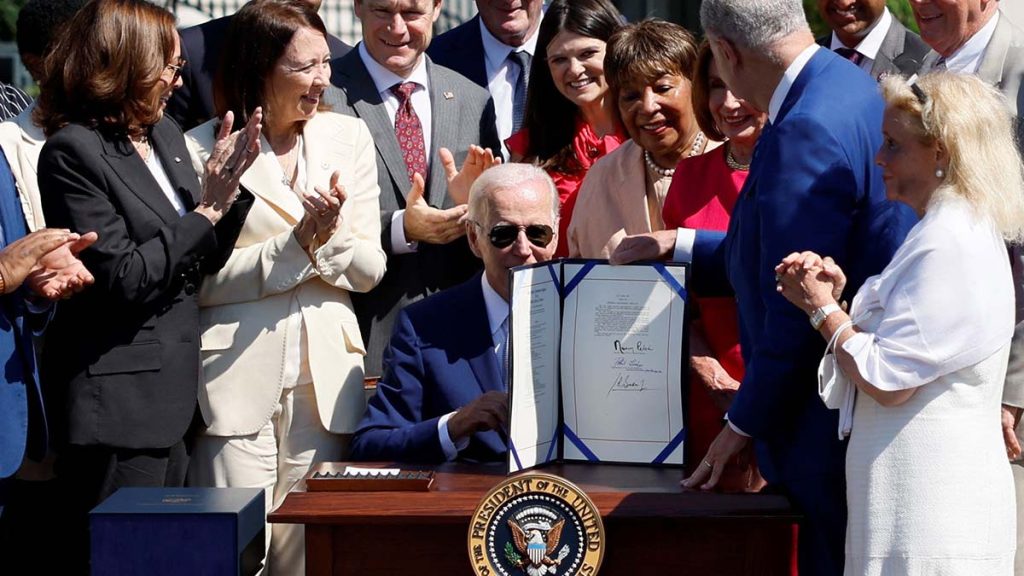 President Joe Biden on Tuesday signed a landmark bill to boost U.S. chips and provide $52.7 billion in subsidies for U.S. semiconductor production and research and to boost efforts to make the United States more competitive with China’s science and technology efforts.

“The future is going to be made in America,” Biden said, calling the measure “a once-in-a-generation investment in America itself.”

Biden touted investments that chip companies are making even though it remains unclear when the U.S. Commerce Department will write rules for reviewing grant awards and how long it will take to underwrite projects.

Some Republicans joined Biden on the White House lawn to attend the signing of the chips bill to boost U.S. chips that was years in the making in Congress.

The chief executives of Micron , Intel, Lockheed Martin, HP and Advanced Micro Devices attended the signing as did governors of Pennsylvania and Illinois, the mayors of Detroit, Cleveland and Salt Lake City, and lawmakers.

The White House said the bill’s passage was spurring new chip investments. It noted that Qualcomm on Monday agreed to buy an additional $4.2 billion in semiconductor chips from GlobalFoundries’ New York factory, bringing its total commitment to $7.4 billion in purchases through 2028.

The White House also touted Micron announcing a $40 billion investment in memory chip manufacturing, which would boost U.S. market share from 2 percent to 10 percent, an investment it said was planned with “anticipated grants” from the chips bill.

Progressives argued the bill is a giveaway to profitable chips companies that previously closed U.S. plants, but Biden argued Tuesday “this law is not handing out blank checks to companies.”

The legislation aims to alleviate a persistent shortage that has affected everything from cars, weapons, washing machines and video games. Thousands of cars and trucks remain parked in southeast Michigan awaiting chips as the shortage continues to impact automakers.

A rare major foray into U.S. industrial policy, the bill also includes a 25 percent investment tax credit for chip plants, estimated to be worth $24 billion.

The legislation authorizes $200 billion over 10 years to boost U.S. scientific research to better compete with China. Congress would still need to pass separate appropriations legislation to fund those investments.

China had lobbied against the semiconductor bill. The Chinese Embassy in Washington said China “firmly opposed” it, calling it reminiscent of a “Cold War mentality.”

Many U.S. lawmakers had said they normally would not support hefty subsidies for private businesses but noted that China and the European Union had been awarding billions in incentives to their chip companies. They also cited national security risks and huge global supply chain problems that have hampered global manufacturing.