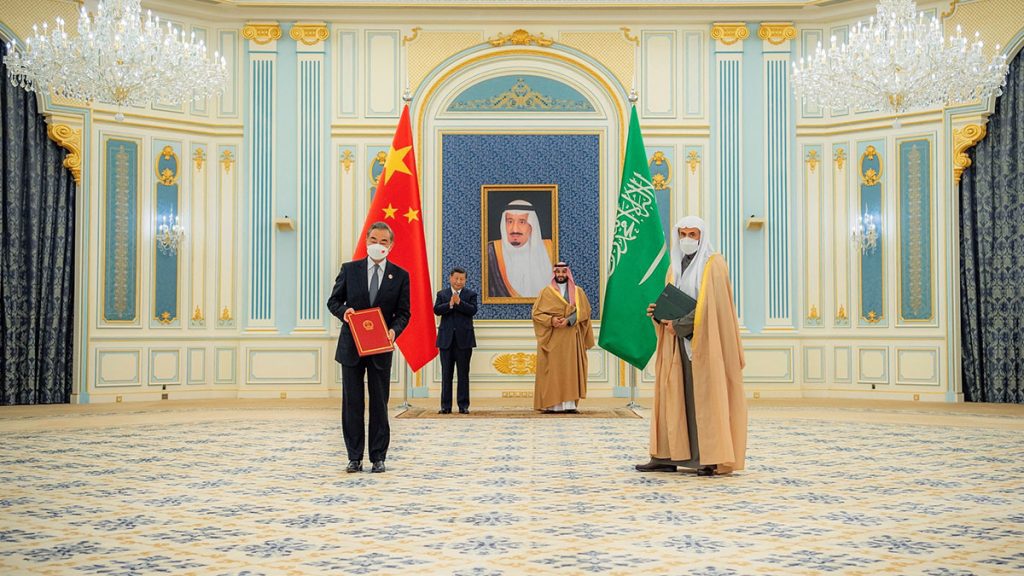 President Xi Jinping told Gulf Arab leaders on Friday that China would work to buy oil and gas in yuan, a move that would support Beijing’s goal to establish its currency internationally and weaken the U.S. dollar’s grip on world trade.

Xi was speaking in Saudi Arabia where Crown Prince Mohammed bin Salman hosted two “milestone” Arab summits with the Chinese leader which showcased the powerful prince’s regional heft as he courts partnerships beyond close historic ties with the West.

Top oil exporter Saudi Arabia and economic giant China both sent strong messages during Xi’s visit on “non-interference” at a time when Riyadh’s relationship with Washington has been tested over human rights, energy policy and Russia.

Any move by Saudi Arabia to ditch the dollar in its oil trade would be a seismic political move, which Riyadh had previously threatened in the face of possible U.S. legislation exposing OPEC members to antitrust lawsuits.

China’s growing influence in the Gulf has unnerved the United States. Deepening economic ties were touted during Xi’s visit, where he was greeted with pomp and ceremony and on Friday met with Gulf states and attended a wider summit with leaders of Arab League countries spanning the Gulf, Levant and Africa.

At the start of Friday’s talks, Prince Mohammed heralded a “historic new phase of relations with China”, a sharp contrast with the awkward U.S.-Saudi meetings five months ago when President Joe Biden attended a smaller Arab summit in Riyadh.

Asked about his country’s relations with Washington in light of the warmth shown to Xi, Foreign Minister Prince Faisal bin Farhan Al Saud said Saudi Arabia would continue to work with all its partners. “We don’t see this as a zero sum game,” he said.

“We do not believe in polarisation or in choosing between sides,” the prince told a news conference after the talks.

Though Saudi Arabia and China signed several strategic and economic partnership deals, analysts said relations would remain anchored mostly by energy interests, though Chinese firms have made forays into technology and infrastructure sectors.

“The Chinese and Saudi governments will also be looking to support their national champions and other private sector actors to move forward with trade and investment deals. There will be more cooperation on the tech side of things too, prompting familiar concerns from Washington.”

Saudi Arabia agreed a memorandum of understanding with Huawei this week on cloud computing and building high-tech complexes in Saudi cities. The Chinese tech giant has participated in building 5G networks in Gulf states despite U.S. concerns over a possible security risk in using its technology.

Saudi Arabia and its Gulf allies have defied U.S. pressure to limit dealings with China and break with fellow OPEC+ oil producer Russia over its invasion of Ukraine, as they try to navigate a polarised world order with an eye on national economic and security interests.

Riyadh is a top oil supplier to China and the two countries reaffirmed in a joint statement the importance of global market stability and energy collaboration, while striving to boost non-oil trade and enhance cooperation in peaceful nuclear power

Xi said Beijing would continue to import large quantities of oil from Gulf Arab countries and expand imports of liquefied natural gas, adding that their countries were natural partners who would cooperate further in upstream oil and gas development.

China would also “make full use of the Shanghai Petroleum and National Gas Exchange as a platform to carry out yuan settlement of oil and gas trade,” he said.

Beijing has been lobbying for use of its yuan currency in trade instead of the U.S. dollar.

A Saudi source, speaking before Xi’s visit, told Reuters that a decision to sell small amounts of oil in yuan to China could make sense in order to pay Chinese imports directly, but “it is not yet the right time”.

Most of Saudi Arabia’s assets and reserves are in dollars including more than $120 billion of U.S. Treasuries that Riyadh holds, and the Saudi riyal, like other Gulf currencies, is pegged to the dollar.

Earlier, the Chinese leader said his visit heralded a new era in relations, voicing hope the Arab summits would become “milestone events in the history of China-Arab relations”.