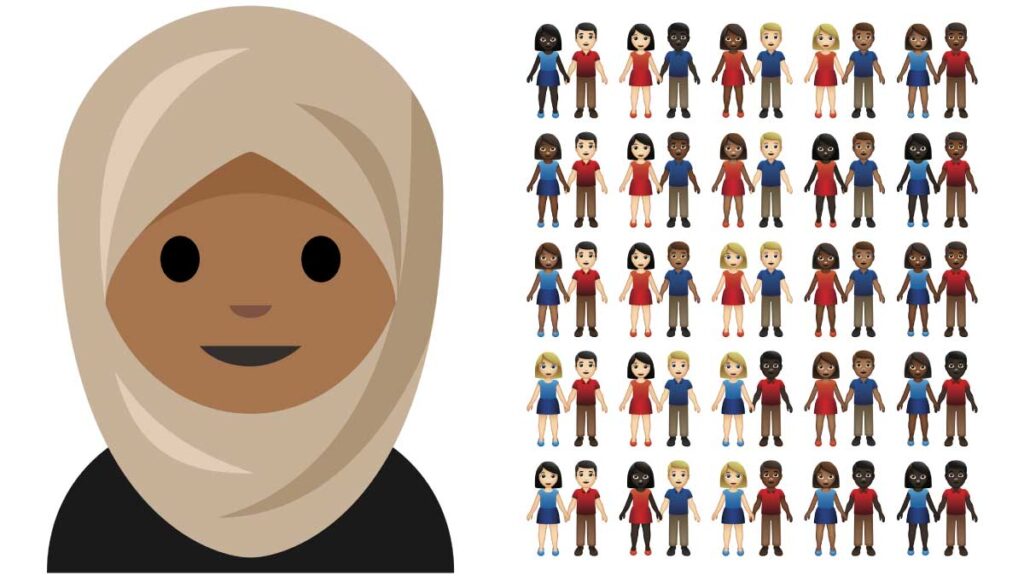 Published: December 17, 2020 by Inside Telecom Staff

The Cooper Hewitt, Smithsonian Design Museum has acquired two emoji that have helped broaden diversity for users of the tiny pictures, becoming the third museum to add emoji to their digital collections.

The New York museum acquired the “person with headscarf” and “inter-skintone couple” emoji for its burgeoning collection of digital assets. The museum plans an exhibition on the significance of the two through interviews and images, but the pandemic has put an opening date in limbo, said Andrea Lipps, Cooper Hewitt’s associate curator of contemporary design.

“The desire to acquire these particular emoji arose from what we were seeing as the desire for inclusion and representation of various groups and communities and couples on the emoji keyboard,” Lipps told The Associated Press in an interview ahead of Thursday’s announcement.

The hijab emoji, as it’s informally known, was submitted in 2016 to the Unicode Consortium, a nonprofit that oversees emoji standards with voting members from the world’s top digital companies. It arrived on phones and computers in 2017. A then 15-year-old Saudi Arabian girl, Rayouf Alhumedhi, attracted worldwide attention as she campaigned for its inclusion. She was selected as one of Time magazine’s most influential teens of 2017.

Roughly 550 million women in the world wear the hijab, Alhumedhi among them, yet there was no emoji to represent them. The same was true of skin tones, and advocates remain vigilant in getting multiracial family emoji on keyboards, beyond the two-person couple options.

The interracial couple emoji was submitted to Unicode in 2018 and arrived on devices last year, giving people their first chance to combine multiple skin tones in a single emoji. It builds on the advocacy work of Katrina Parrott, a Black, Houston-based entrepreneur inspired to create diverse skin tones in emoji after her daughter lamented she couldn’t properly represent herself on keyboards.

As a third-party developer, Parrott was the first to put out multiracial emoji through her own app, iDiversicons, five years ago. She advocated as a non-voting member of Unicode for the consortium to do the same for a wide array of devices. A campaign leading to the inclusion of interracial couples, later spearheaded by the dating app Tinder and others, received a Webby Award last year. Parrott was not involved in development of the couples emoji but noted the significance in promoting greater diversity.

Parrott had no technical experience when she took on her project, but as a former NASA contract worker in logistics, she knew how to put together a team.

“We said we don’t want to do just an app for African Americans. We want to represent the world because everybody was feeling the lack in emojis,” Parrott told the AP of her pioneering app. “We did African American skin tone, we did Asian, Caucasian, folks from India and those who are Latino and Hispanic. We covered all the bases.”

Now 19 and a sophomore at Stanford University, Alhumedhi said she decided to get involved after realizing she had no way to represent herself in a WhatsApp group chat with friends when they switched from photos to emoji in their profiles. She stumbled across a Snapchat story on how to submit a proposal for new emoji to the Unicode Consortium, where heavy hitters like Apple, Twitter, Facebook and more decide what emoji are released for companies to choose from.

Media attention flowed after Reddit co-founder Alexis Ohanion facilitated an Ask Me Anything session for Alhumedhi on his platform to get the word out on her emoji campaign. She also received help from Emojination’s Jennifer 8. Lee.

“We talked about how representation is so important, even if it appears in such a small way,” Alhumedhi told the AP from Vienna, where she’s waiting out her return to her California campus. “We also wanted to trigger a dialogue about the hijab itself and what it means in today’s digital age. I saw a lot of people having very big opinions about the hijab without really discussing it with someone who wears it or doing further introspection into what it means.”

The hijab and interracial couples emoji were designed by Aphelandra Messer, who was working at the time for Emojination, a grassroots group that advocates for more inclusive and representative emoji.

The designs have “impacted billions of keyboards worldwide and reframed how people have seen themselves on the small screen. It’s amazing to see their historic work archived in the nation’s greatest museums for current fans and future scholars,” said Lee, producer of “The Emoji Story,” a new documentary film out Friday, and co-founder of Emojination.

The Cooper Hewitt announcement follows the 2016 acquisition of the original DoCoMo emoji set by the Museum of Modern Art in New York. DoCoMo is a top mobile phone operator in Japan, where emoji began. In 2018, the Victoria & Albert Museum in London acquired the proposed mosquito emoji design. All are part of a larger effort for museums and cultural institutions to preserve significant parts of digital history and culture.