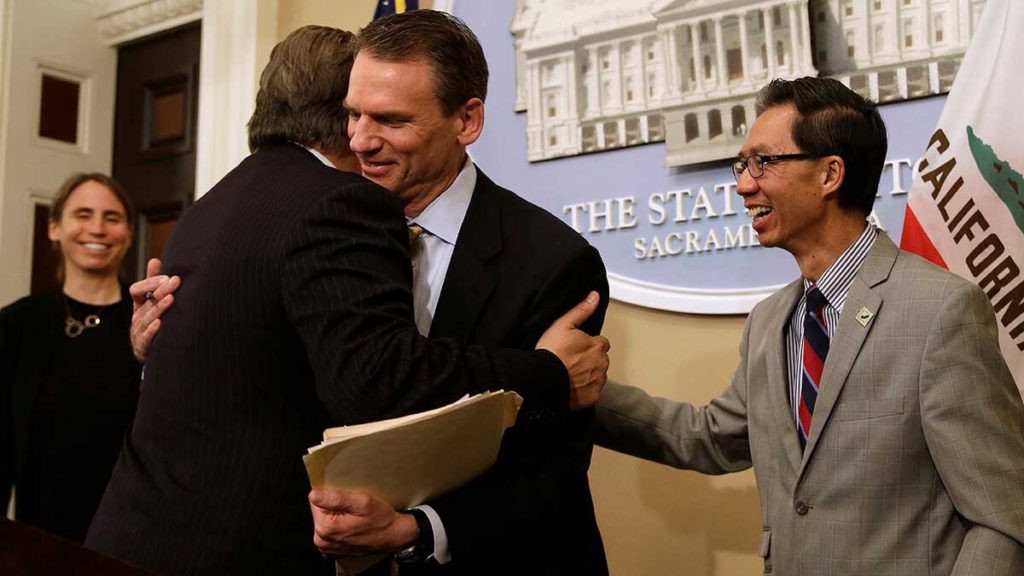 SACRAMENTO, Calif. (AP) — California voters will weigh in this November on whether to expand a landmark data privacy law, alter a decades-old law that limits property taxes on businesses and exempt ride-hail giants Uber and Lyft from a new state labor law.

They are among 11 measures Secretary of State Alex Padilla certified on Thursday for the Nov. 3 ballot. Others include two constitutional amendments approved by the Legislature, which would overturn the state’s ban on affirmative action and restore the voting rights of people with felony convictions who are on parole. A referendum will ask voters to decide whether the state should eliminate cash bail.

Ballot measures are often among the most expensive and high-profile issues before California voters each election year and tens of millions of dollars are likely to be spent on each of the major initiatives. Uber, Lyft and DoorDash have pledged to spend $90 million on their measure to exempt them from a state labor law that would require them to treat their workers as employees entitled to more wage protections and benefits.

The most recent measure to become eligible, on Wednesday, would give consumers more power over how companies use their data. It’s an extension of a landmark privacy law passed in 2018. It would allow consumers to prevent businesses from sharing their personal information; limit businesses’ use of geolocation, race, health or other information; and create a state agency to enforce and implement the law. The agency would hire 40 employees at an estimated cost of $10 million per year.

It builds on the California Consumer Privacy Act, which took effect Jan. 1. Lawmakers passed it in 2018 under pressure from Alastair Mactaggart, a wealthy California developer, who spent millions of his own money to qualify an even more sweeping measure for the ballot. He withdrew his measure when the law passed under a compromise with legislators.

Under the existing law, consumers can request companies, including internet giants Google and Facebook, tell them what personal data they have collected and what third parties the companies shared it with. Consumers can ask companies to delete it or stop selling it. Companies can’t sell data from children under 16 without consent.

Mactaggart’s new initiative would triple the penalties for companies that violate the rules for children under 16.

“California has led the nation in securing fundamental privacy rights,” Mactaggart said in a statement. “During these times of unprecedented uncertainty, we need to ensure that the laws keep pace with the ever-changing ways corporations and other entities are using our data.”

Dylan Hoffman, director of California Government Affairs for the Internet Association, said the organization’s member companies, which include Amazon, Facebook and Google, are focused on complying with the existing law and that further changes should be made by lawmakers, not at the ballot.

“The internet industry believes that the Legislature is the proper venue to vet such a complex and technical area of law and policy,” he said in an emailed statement.

The efforts to overturn the state’s ban on affirmative action policies, restore the voting rights of parolees with felony convictions and end cash bail are likely to generate significant attention as the nation grapples with systemic racism and calls to reform the criminal justice system.

Voters in 1996 banned governments and public colleges and universities from considering race in their hiring and admissions decisions. California lawmakers passed a law eliminating cash bail in 2018 but opponents blocked it from taking effect by qualifying a referendum for the ballot.

Other measures on the ballot this fall would: