E-waste in the 5G era: Threat or opportunity? 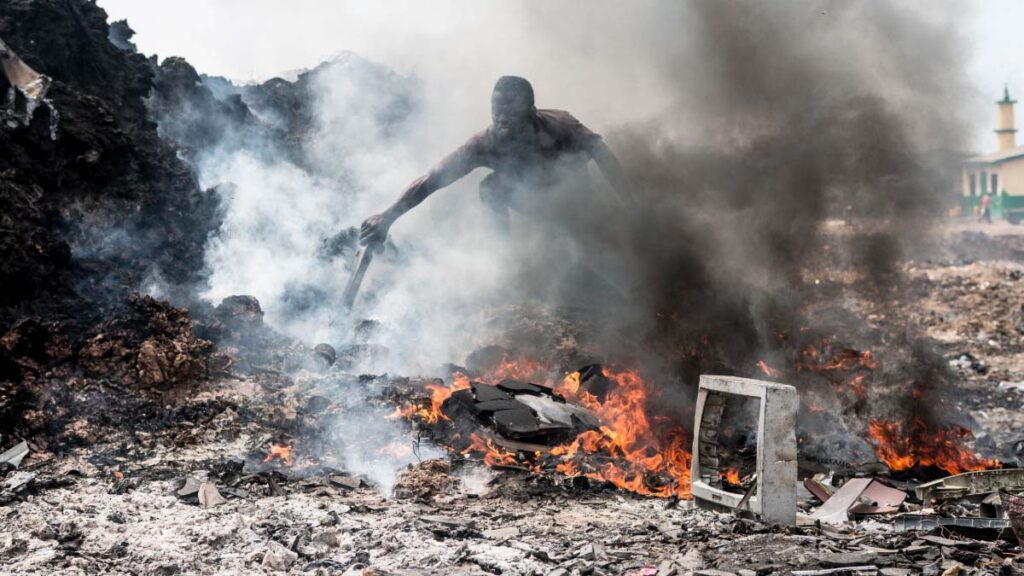 Take a moment to think about your appliance drawer at home; everyone has one, and more often than not, it’s filled with pallets of once beloved but now outdated devices – from smartphones, tablets, cameras, and the like.

While these devices might not look dangerous, they find themselves at the heart of a major environmental and economic debate, as the world edges closer to the global rollout of 5G: the e-waste problem.

Electronic waste, or e-waste, refers to all electronic products that have been discarded without the intent to refurbish or reuse.

It’s hard for many to conceive the fate of these devices; in plains, fields, and factories where workers hammer away at them to remove hazardous components such as lithium-ion batteries, copper and platinum.

The scene is like a twisted Pixar movie, with doomed gadgets riding an unrelenting conveyor belt into a machine that shreds them to pieces.

While 5G markets itself to be the tidal wave of worldwide technological change, a revolution of this kind comes at a price and could usher in an unprecedented wave of electronic waste we’re simply not prepared for.

“The exponential growth we’re going to see in electronic waste, especially around obsolescence … [given] the technology curve for these 5G connected devices is so steep at the moment, is a concern,” says Dr. Miles Park, a senior lecturer in industrial design at the University of New South Wales.

According to studies done by the United Nations Environment Program, with the annual cycle of modern-day consumer electronic, the rate of e-waste currently produced is up to 50 million tons yearly. Cell phones, tablets, computers, and televisions –lots of old technology already makes its way into landfills.

“It is already difficult enough when a new product is launched on the market every 12 months, and it’s just driving obsolescence of the previous generation of product because there is so much innovation and redundancy happening in this field,” Dr. Park added.

Some environmental organizations are already calling on tech companies to foot the bill of recycling the electronics they manufacture and sell. This has picked up traction in some parts of Europe, Canada, and in some US states who have passed the so-called Extended Producer Responsibility (EPR) laws, which require manufacturers to set-up and fund systems to recycle or collect obsolete products.

An example of this can be seen at Apple, where a smartphone-recycling robot called Daisy was developed in 2018 that has the ability to take apart 200 iPhones per hour, and says it diverted 48,000 metric tons of electronic waste away from landfills.

But that’s a drop in a bucket compared with the 50 million tons of e-waste generated globally last year. With 5G being a stone’s throw away, a flood of worldwide e-waste is on the horizon, and recycling alone won’t be enough.

Yet there are a number of ideas and solutions being developed, researched, and implemented across the globe that may be enough to inspire the adoption of better practices in the fight against climate change.

The world is in need of safer, and more durable electronics that are repairable, and recyclable; in essence, using less hazardous materials.

Currently, chemical engineers at Stanford University are working on the world’s first fully biodegradable electronic circuit, which uses dyes that dissolve in acid with a pH 100 times weaker than vinegar.

While a group of researchers from both the Indian Institute of Science in Bangalore, India, in collaboration with the Texas Rice University in the US have aimed toward pulverizing electronic printed circuit boards, in specialized mills at ultra-sub-zero temperatures, into reusable nano-dust.

In parallel, Ronin8, a Vancouver-based e-waste management company, developed a technology that uses minimal water and energy to separate metals from non-metals via sonic vibrations in recycled water.

Widening the scope of EPR will hold tech companies and electronics manufacturers responsible for managing and disposing of their devices at the end of their working lives; this lays the ground for recycling materials such as copper, platinum, gold, and many others, to be reused in the development of newer products.

This can be seen through the New York State Electronic Equipment Recycling and Reuse Act which requires manufacturers to provide consumers with free and convenient e-waste recycling.

This effort needs all the help it can get, thus commercializing the recycling process to the masses will allow tech companies, as well as waste management companies, to collect older devices for them to be treated. An example of this can be seen with EcoATM, a US-based e-waste management company, which incentivizes people to turn in their older products to one of their 2,700 kiosks across the U.S. The EcoATM evaluates devices based on model and condition, and directly hands you a sum of money based on that evaluation.

Across the Pacific Ocean, China’s biggest Internet Company, Baidu, has developed a smartphone app in collaboration with the UN Development Program called Baidu Recycle. Users specify the device in question, enter its measurements along with a convenient pickup date accompanied with their name and address; an accredited recycler will pick it up from you within 24 hours.

11,000 devices have been recycled in the span of two months after its release.

The dream of a circular economy

A circular economy is one that aims to keep products and all their materials in circulation at their highest value at all times or for as long as possible.

According to Stephanie Kersten-Johnston, an adjunct professor in the Sustainability Management program at Columbia University and Director of Circular Ventures at The Recycling Partnership, the “highest value” means what’s closest to the original product, to get the most out of the value of the material and the labor that went into creating the product.

Europe has made the circular economy a goal for the whole continent.

“Right now, over the length of the contract, you gradually buy outright the phone so the provider can recoup the cost of manufacturing that phone in the first place,” Kersten-Johnston, using the example of smartphones, was quoted as saying.

“But at the end of the contract, you’re left with a phone that’s worth basically nothing, that you’ve had to pay for all that time and you can’t do anything with it. That’s a flawed model. But imagine a system where the provider or manufacturer retained ownership of the device through the contract so customers would pay a lower monthly fee and be expected to return the device for an upgrade. The value could be recaptured in the form of parts for remanufacture or materials for recycling, and customers would still get their upgrades,” she added.

Kersten-Johnston considers that this business model will happen sooner, rather than later, stating that millennials and the younger generation do not value ownership in the same way older generations do, while being more vocal toward more responsible business practices.

On another note, reusing and recycling the materials from these old gadgets brings a myriad of economic benefits across the board. According to the International Telecommunication Union (ITU), the circular economy could generate opportunities worth over $62.5 billion annually and create millions of new jobs worldwide.

With this in mind, the UN has set a target to increase global recycling to 30 percent, and reaching 50 percent in countries with legislation on e-waste.