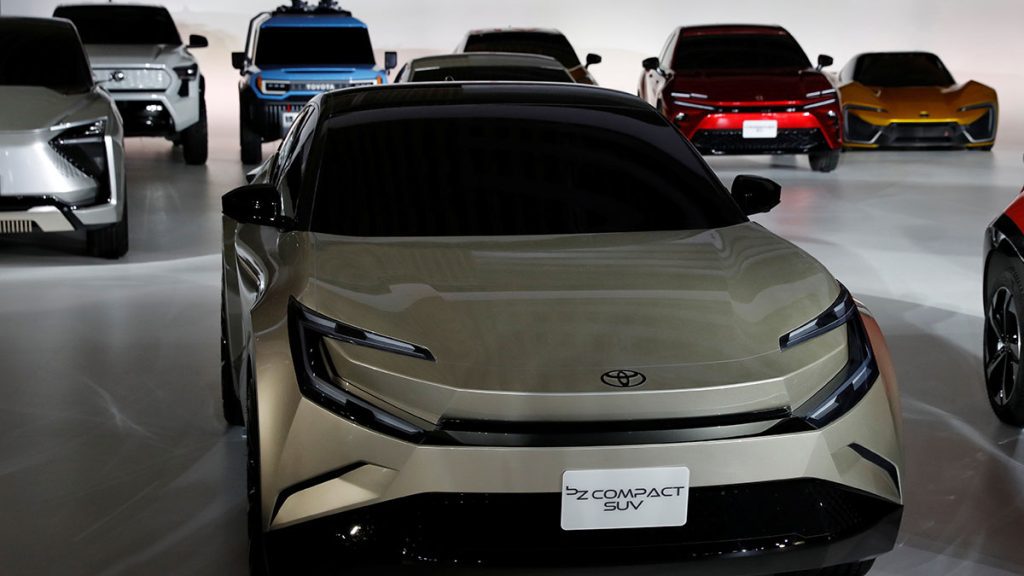 Toyota Motor Corp is expected to outline adjustments to its electric vehicle (EV) strategy to key suppliers early next year, as it races to narrow the gap on price and performance with industry leaders Tesla and BYD, two people with knowledge of the work said.

The leading Japanese automaker is expected to detail the EV plan changes through early 2026, communicating the adjustments to major suppliers, the people said on condition of anonymity as the information is confidential.

Toyota has been looking at ways to improve the competitiveness of EVs being planned for this decade, in part by speeding up the adoption of performance-boosting technologies for planned EVs, from electric drive systems – including motors – to the electronics that convert power from the grid to energy stored in batteries and more integrated heating and cooling systems, the people said.

The changes, however, might include delays to some of the EV development programmes originally planned for the three-year period, one of the people said.

The changes would be for the successors to Toyota’s first two EVs for major markets, the bZ4X and the Lexus RZ, and intended to close the gap with Tesla Inc on cost and performance, the people said.

Toyota is set to convene a major powwow of suppliers in February, the first such global supplier convention since the pandemic.

Toyota said in a statement that it is “always actively discussing and working with key (suppliers and partners) on a variety of topics,” to achieve carbon neutrality. But it said it had no new details to disclose on EV development projects.

Billionaire Elon Musk’s Tesla made almost eight times the profit per vehicle as Toyota for the third quarter, partly because of its ability to simplify EV production and reduce cost, analysts have said.

Toyota has been reviewing a $30-billion, three-stage plan for developing and releasing EVs it announced late last year, Reuters reported in October.

It has suspended work on some battery-powered car projects announced last year, while a working group headed by former chief competitive officer Shigeki Terashi looks to improve cost performance and technology in the fast-growing market for EVs.

The working group has been charged with outlining plans to improve Toyota’s EV approach, including considering a potential successor to its new EV platform, e-TNGA.

The revamp comes even as Toyota holds the view that gasoline-electric hybrids, a market it pioneered with the Prius, will remain a crucial part of the transition to carbon-neutral transport.

Most major automakers expect EVs to account for the majority of vehicle sales by 2030, and green investors and environmental groups have pushed Toyota to move faster as industry-wide EV sales exceed Toyota’s earlier assumptions.

Toyota’s EV strategy has focussed on the rollout of cars like the bZ4X, the first of a string of battery electric vehicles under the series name “beyond zero”.

The second stage of Toyota’s plan covers the next several years when Toyota has models based on the e-TNGA platform in development, the company has told some suppliers. Adjustments to this phase are the changes likely to outlined to suppliers early next year.

Now Terashi’s group is considering whether to drop the three-year-old e-TNGA architecture, created by modifying a gasoline car platform, in favour of a dedicated EV platform, people with knowledge of that work have said.

E-TNGA was designed so EVs could be built on Toyota assembly lines with gasoline cars and hybrids, a compromise that limits the automaker’s ability to deliver factory-floor innovations that Toyota engineers now recognise as key to Tesla’s strength.

Also, Toyota designed e-TNGA on the assumption it would need to sell about 3.5 million EVs a year, about one-third of its current global volume, by 2030, sources have said, while the industry outlook is for a faster pace of growth.

Toyota has been working with two suppliers Denso and Aisin for its EV reboot.

It has been looking at whether it could expedite the adoption of a new thermal management system jointly developed by Aisin and Denso and potentially a more advanced electric powertrain, or eAxle, from Aisin.

Toyota has also been looking at whether it could introduce in some large premium EVs a just-developed silicone-carbide-based inverter from Denso that would improve charging and help lower manufacturing costs.

Denso and Aisin did not respond to requests for comment.

Terashi’s role in leading Toyota’s EV strategy review, after being sidelined in the company, has been seen by some as a sign the automaker is closer to a full pivot on EVs.

Terashi, 67, did not respond to a request for comment.

Over the course of his 42-year career, Terashi has been one of Toyota’s top vehicle planners and a strong advocate of zero-emissions cars, including hydrogen.

He was part of the team that opened the way for Toyota’s cooperation with China’s BYD, the world’s largest EV maker. That resulted in a soon-to-be-marketed, China-only Toyota electric sedan called the bZ3, powered by BYD batteries.