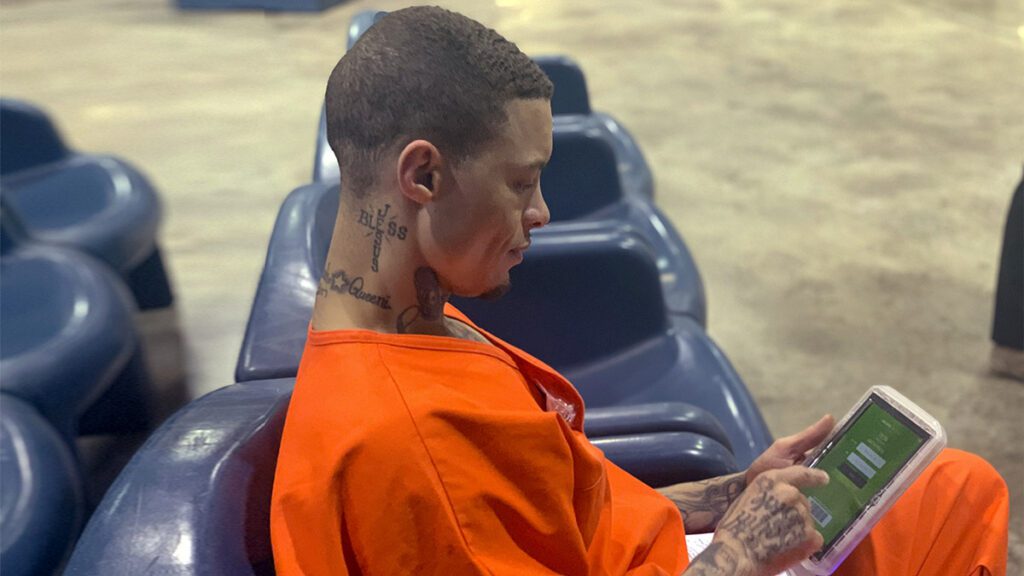 Inmates at an Oklahoma prison began receiving special computer tablets this week, as part of a Department of Corrections plan to provide secure tablets to everyone incarcerated in state prisons.

The devices, specially designed by prisons communications company Securus Technologies, will include free content such as prison policies, access to a law library, some books and educational and self-help materials. Inmates can also pay to receive music, movies, games and television programs, as well as to send and receive messages, including video messages, to and from their families. The tablets do not have unrestricted access to the internet.

Usually, inmates wanting to receive educational or vocational training must be escorted to a classroom or program location. But inmates can now receive those services directly on the tablet, said Mike Carpenter, chief of technical services and operations at the Corrections Department.

“The education and programming, that’s huge for us,” Carpenter said.

On Tuesday, North Fork Correctional Center inmate Byron Robinson, who has been incarcerated since 2005 — the same year YouTube was founded — said the tablet was totally new to him.

“I’ve never even touched one of these things until today,” Robinson said. “It’s mindboggling, really, how much this thing can do.”

Similar programs allowing inmates to access secure tablets have been rolled out in other states, including Arizona, Connecticut and Utah, but Oklahoma is one of the first in the nation to combine the company’s latest tablet and operating system.

“It has been phenomenal,” Hedrick said.

Besides helping to keep inmates pacified, Hedrick said the jail scans incoming letters and photographs to an inmate’s tablet, reducing the chance for contraband to come into the facility and allowing inmates to have access to more personal photographs.

“Before you had rules on how many photos they could have in their cell, how many magazines,” he said. “Now that doesn’t happen. They can have as many as they want.”

There are some drawbacks to providing inmates with tablets. According to a 2019 report from the Prison Policy Initiative, the “free” tablets frequently charge users above-market prices for services. Oklahoma’s contract with the company allows a 25-cent charge for emails and 75 cents for outbound video messages. Music can cost up to $1.99 per song or $14.99 per album, while the cost for one television episode can range from $1.70 to $2.28.

Some 21,000 inmates are currently incarcerated by the state, making the plan potentially very lucrative for Securus.

The Department of Corrections also benefits financially from the arrangement, receiving $3.5 million annually from the communications company for the first five years of the contract, and $3.75 million for the next five years.

“Our recent analysis of these contracts suggests that they actually put the interests of incarcerated people last, prioritizing cost savings and the provider’s bottom line,” the report said.

Sierra Kiplinger, who was released from prison in April, said that while inmates are excited about the new technology, she expressed concern about how much inmates have to pay to utilize the services.

” The phone calls for Securus are ridiculously high, and so I’m assuming if the phone calls are high, this is going to be even higher,” she said.

State Rep. Justin Humphrey, chairman of the House Criminal Justice and Corrections Committee, said that while he supports the program, he believes public perception could be a problem.

“I don’t think the public is going to like it when they see we’re giving all these inmates tablets and they say, ‘My kid can’t get a tablet at school,’ Humphrey said.