Published 2 Months Ago on Friday, Sep 30 2022
By Mohamad Hashisho 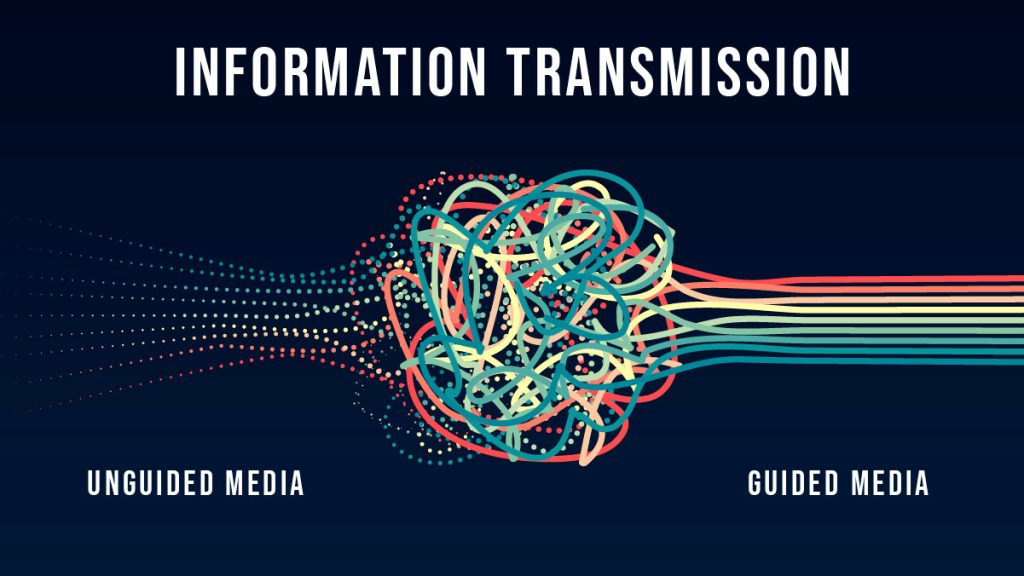 The world currently relies heavily on data transfer and media transmission. Yet the two types of media remain a topic under-discussed. Guided and unguided media transmit the media as we know it today. Wired or wirelessly, the technology we use couldn’t be perfected today without the presence of these two types.

The media classifies as guided when information is transferred utilizing wires and a solid medium. Guided media is often used for point-to-point communication or as a shared link with multi connections. Precise shielding of guided media is essential to limit interference. Guided media uses three types of transmission. Here is a quick look:

Firstly, one of the most recent advancements in guided media is fiber cables, which utilize light’s reflection through a transparent core. Layers of less thick glass or plastic covering engulf the body. Massive data transfers use optical fiber cables.

Moreover, the twisted pair is the most common and vintage cable type. As the name hints, it is made from two separated and insulated conductor wires twisted around each other. A protective sheath protects the grouped wires. Twisted pair wires are the most used type of wires worldwide regarding guided media.

Furthermore, a transverse electromagnetic (TEM) transmission line medium called stripline was developed in the 1950s by Robert M. Barrett of the Air Force Cambridge Research Centre. Stripline is the earliest type of planar transmission. It is also known as a waveguide because it transmits high-frequency waves using a conducting substance. This conductive substance is positioned between two ground plane layers, often shorted to offer EMI immunity.

Finally, the coaxial cable is a plastic cable containing two parallel conductors. Each has a protection layer, and this cable operates in two modes. The baseband mode transmits specific base data, and the broadband mode sends data split into multiple separate ranges. Cable Tv businesses are the main users of coaxial cables.

Unguided media is the form of media that ditches the physical medium when transmitting data and information. it also implements the use of air as a transmission method. Since it neglects the use of wires, it is referred to as wireless transmission media. Waves carrying information and media come in three main variations.

Firstly, we have a relic from the past. Infrared waves are used for limited and short-distance communication. Infrared is blockable by walls and obstacles, which prevents interference between systems, but makes it a minimal option. Ideal for remotes, computer accessories, and such.

Furthermore, we have radiowaves. It is easily accessible and does not have the hindrance of infrared; walls and obstacles do not block them. They operate within frequency ranges, ideal for satellite use.

Finally, we have microwaves. The line of sight used between two aligned antennas is in mobile phone communication. The distance is coveres signals directly proportional to the antenna heights.

Difference Between Guided and Unguided Media

Guided and unguided media complete each other, but they are not similar. The apparent difference is the aspects, one is physical and wired, and the other is wireless. Additionally, guided media is generally faster than its unguided counterpart.

Additionally, guided media is cheaper to use and set up. The implementation won’t cost you as much as an unguided one. Guided media requires minimal . Unguided media often use more intricate technologies that need maintenance. The guided media is far more flexible as well. With improved wiring, you can enhance the mass and speed of data shared, unlike the wireless aspect, which limits you to a fixed capacity.

Finally, guided media is more secure. You will transmit your data securely, since the wireless media transfers wirelessly, it is prone to various security worries. And the material used in wired media might be a bit more wasteful, but sustainability is increasing in all sectors, and Guided Media will probably use greener materials soon.

Lastly, Guided and unguided media are pillars of data transmission. Thanks to these two methods, significant technonology advancenemts happened. Allowing the exchange and communication of information and mass data. Talking more about guided and unguided media should help people realize the unknown soldier of the technology world.