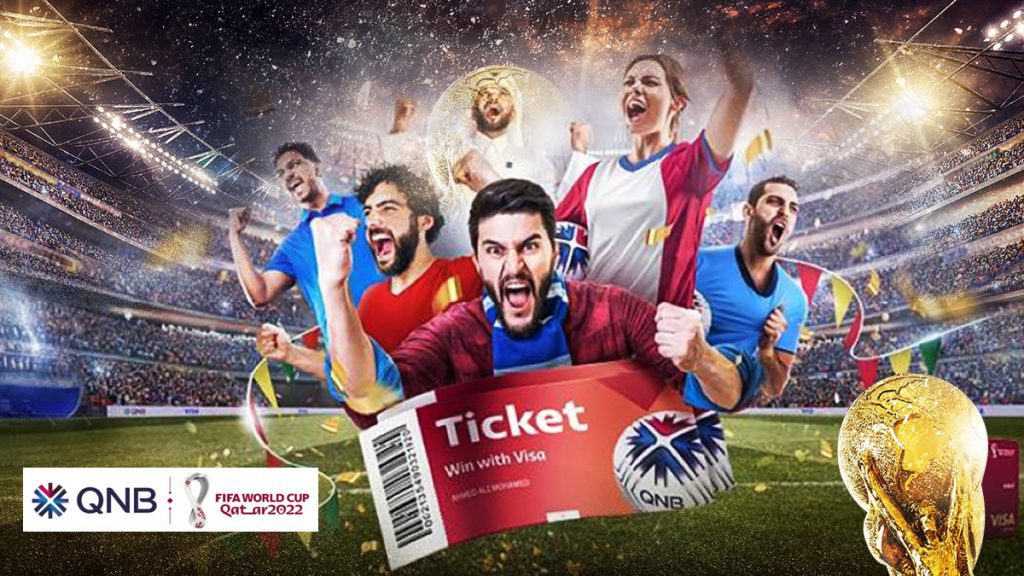 Qatar is hosting the most significant event in the world currently. Across all sectors, everyone is doing their part to ensure the world witnesses the greatness of Qatar. The choice was almost already made in the conversation on whom to pick to be a partner and handle the financial aspect of the tournament. QNB fits the picture as the perfect puzzle piece. Ranked as the most valuable bank brand in the MENA region. QNB being the official Middle East and Africa supporter for the WorldCup made perfect sense.

QNB is the sole bank in the MENA region to share its passion for football with its clients. The bank is offering its new and existing customers a chance to participate and win a prize that is highly in demand currently. WorldCup Tickets. Through a series of raffle draws, the four-month-long “Be on the winning team” campaign is allowing 450 lucky customers to have the opportunity to receive two of the 1,000 match tickets for the first FIFA World Cup 2022 to be held in the Middle East.

Furthermore, the initiative, which is only available to QNB’s Retail Banking customers. Giving participants a chance to win one of 1,000 match tickets for the eagerly anticipated competition. Customers can either open a new account with QNB or, if they already have one, increase the sum in their existing account to participate and qualify for the monthly draws. Clients will also be eligible when creating a non-resident account (available in a few Middle Eastern and African nations) or sending money abroad digitally. Customers can increase their chances of winning by transferring their salary or obtaining the quickest personal or auto loan with the lowest interest rate. This is a brilliant marketing strategy to attract new clients while encouraging your loyal clientele to invest further. A simple but elegant move by the right bank.

Lastly, “QNB launches the most extensive campaign of the year to thank our customers for their loyalty.” Said Mr. Adel Ali Al-Malki, General Manager of Group Retail Banking. In keeping with the recently launched campaign “Score with your QNB Visa credit card,” QNB promises its customers the chance to attend this once-in-a-lifetime event. Securing their seat for the FIFA World Cup 2022 by simply carrying out their regular banking activities. QNB wants to share the most significant moment in the world with you while delivering on all your financial needs.

The Bank hosted a unique entertainment program full of thrilling entertainment for locals and guests traveling to Qatar from all over the world to have an unforgettable experience. To maintain the growing interest in and passion for football, the program features a variety of football events and activities. Khaby Lame, the most followed person in the world on TikTok and the Official FIFA World Cup 2022 Brand Ambassador for the QNB Group, made a surprise appearance in the legendary stadium during the historic match between the Saudi national team and Argentina, much to the delight of football fans.

Moreover, the bank wants to inspire fans and allow them to express their passion by offering them a unique set of events. These events come as QNB celebrates the first-ever Arabic WorldCup.” QNB has planned a high-energy entertainment program producing memorable moments and unforgettable experiences for fans throughout the tournament.” Stated Ms. Heba Ali Al-Tamimi, General Manager of QNB Group Communications. In the QNB booth, we are excited to host soccer enthusiasts worldwide to celebrate the “beautiful game” through our different events and games.

Finally, this proves that the giant of the banking sector speaks the language of the fans worldwide. It allows them to express their happiness to be a part of the most significant event in the world. Giving them a chance to meet legends of the game and their favorite influencers as well. QNB presents itself as a partner of Qatar and football fans around the globe equally.

True Belief in the Youth

QNB truly and wholeheartedly believes in the youth. After all, they are the pixels of tomorrow’s picture. The financial giant started an initiative hoping to make a clear statement. This initiative allows selected students to sell commemorative banknotes across selected QNB branches during the tournament. Such focus on volunteer opportunities will better the connection of the bank with the youth, if not the whole nation. The bank has an unobstructed vision to promote youth volunteerism as a pillar of the ever-so-present 2030 vision.

“We are delighted to welcome students from the Qatar Banking Studies and Business Administration Secondary School to join this initiative aimed at supporting the efforts made by QNB to introduce the Qatar 2022 commemorative banknotes to the general public”. Said Mr. Abdullah Nasser Al-Khalifa, general manager of QNB Group Human Capital and school board member. These banknotes will leave a legacy that endures past the World Cup by featuring the most significant stadiums from the illustrious competition.

QNB’s choice to be the partner for the tournament is not just a reasonable business choice. It is a statement of solidarity. Qatar believes in its best bank and wants it to stand tall at the front and center of the event. Everything the financial institution has been doing so far is to propel the nation even further—step by step toward achieving the ambitious vision of 2030.