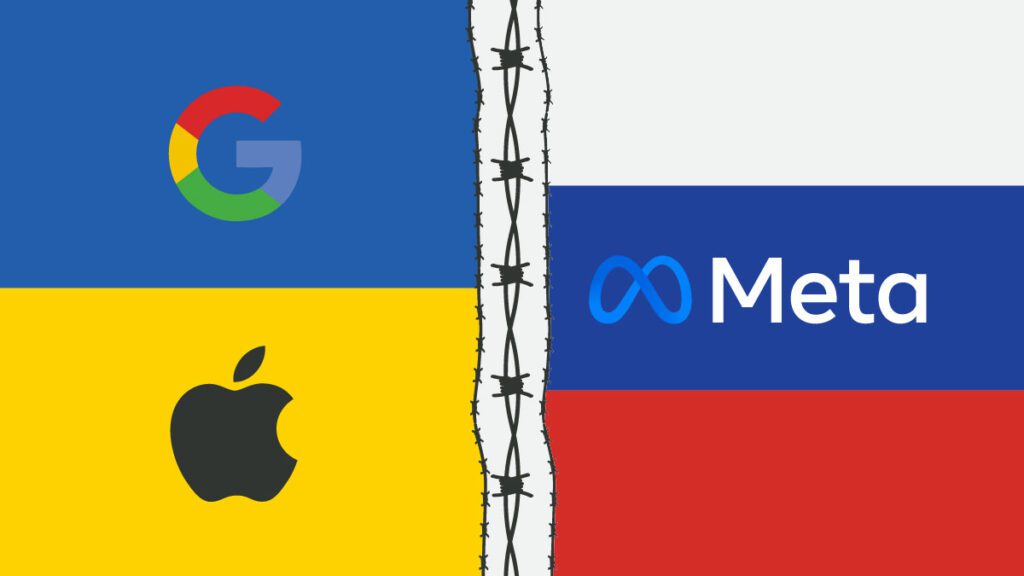 The world’s Big Tech giants, Alphabet, Amazon, Meta, Apple, and Microsoft have played a vital role in tailoring the public’s opinion that the crisis between Russia and Ukraine was ignited. When the world was comprehending the sudden Russian invasion of Ukraine, the American tech industry’s leading tech companies were preparing to fight with Russia on a digital territory to undermine the authoritarian power of Russian media. The tech giants’ fight against Russia imposed fundamental sanctions and ruled on the country’s media channels with regard to their role in reporting on the Russian invasion.

The digital era has created a new communication branch in terms of how people interact. And US-based Big Tech giants have immense power in limiting democracies and modeling what can be presented to the public on their platforms. From there, the colossal rage of the US tech moguls unleashed its fury on Russia in response to its conduct towards Ukraine. But the wrath of the tech giants was not strictly confined to the limitations, or more like how these giants entered the geopolitical scene as their platforms entered the battle of information, making them a significant part in the fight against Russia. So, what tech companies left Russia and halted providing their services in the country

The American company operating as an online marketplace for lodging and providing rental spaces for vacation halted all operations in Russia in April 2022. Following its decision, the housing company publicized that its nonprofit subsidiary would give Ukrainian refugees 100,000 free of temporary charge housing.

The iOS developer halted the distribution and the selling of its products in Russia, as well as any online transaction made on its Apple Pay platform. Not only did the Big Tech giant disable its payment services and the sale of its products in Russia, but it also disabled its Maps feature in some Ukrainian cities to deliver more security and protection to Ukrainian civilians during the invasion and bombing.

Some of the world’s most prominent automakers, such as German automaker BMW, American giants Ford and General Motors, and Japanese automotive company Honda minimized sales in Russia. BMW announced it would stop any local manufacturing of their vehicles in Kaliningrad and finally stop any export to the country. This came before Ford also declared that it would immediately stop all operations in Russia.

The Swedish multinational telecommunications titan stopped all deliveries to Russian territories, in addition to suspending operations with the Russian customers. The giant explained that the reason behind its decision was to ensure the safety of the Ukrainians while guaranteeing the safety of its employees in Russia.

One of Google’s most known business branches is advertising and the power it holds on a country’s economy. Following the Russian-Ukrainian invasion, the search engine titan stopped all advertising operations in Russia. While Google highlighted its stance on the invasion through this suspension, its search engine remained operational in the country.

Some of Google’s suspended operations consisted of YouTube’s ads, search, Google Maps, and a variety of the company’s sponsored marketing operations. The move to leave the Russian market was also preceded by Google’s decision to stop any billing on its Play Store and mobile app store and suspended any payment-based services on YouTube Premium and Super Chat.

The global business machines titan also followed the giants’ lead and suspended its operation after the invasion. The company revealed that the decision to stop all operations on Russian territory is endorsed by the vitality of ensuring the protection of IBM’s refugee employees.

As one of the giants in the tech lead, the software developer was bound to make a move to show its’ stance against the Russian-Ukrainian invasion. The company revealed it would be halting sales of all of its products in Russia with a promise to intensify its support to fortify Ukraine’s cybersecurity power and infrastructure. In March 2022, the software declared it would increase the scrutiny of its operations in June. A move that could affect an estimate of 400 employees in the country and questioning “is Microsoft boycotting Russia?”

Since the igniting of the Russian-Ukrainian conflict, tech companies have demonstrated their support for the Ukrainian people. But what if this support is not purely selfless. These decisions demonstrated the gripping power such companies have on the sustainability of economies or simply the role they play in pushing economies towards development. These moves proved to have a more significant effect than the world had expected, as tech companies are caught in the geopolitical crossfire from Russia, Ukraine, the European Union, and the U.S.