Published 1 Month Ago on Saturday, Nov 05 2022
By Mohamad Hashisho 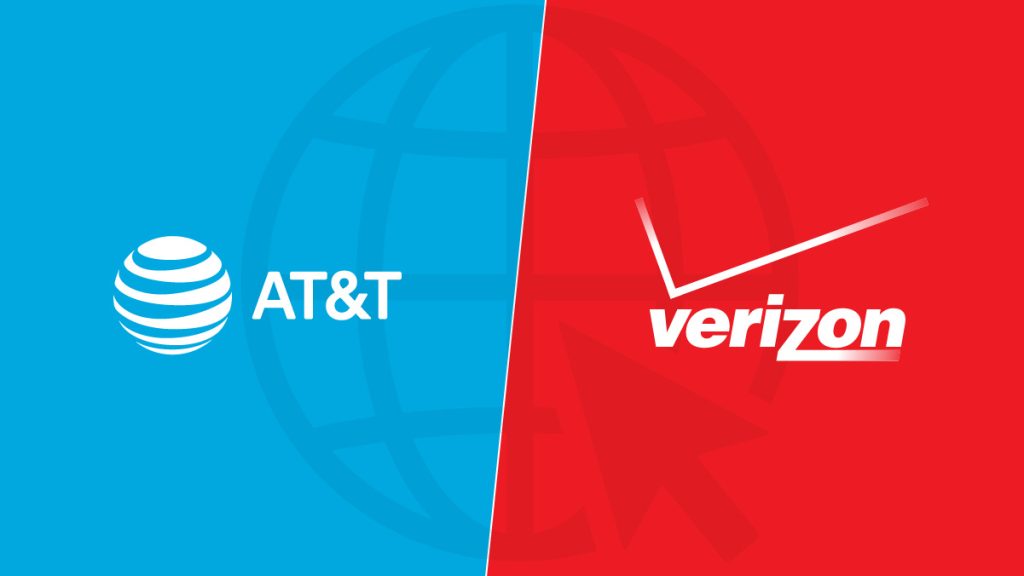 The battle for mobile service and internet providers is raging in the United States, with AT&T and Verizon in direct competition. Both carriers offer excellent extensive service, and the margin of competition is slim. Yet the AT&T Verizon rivalry is hitting its peak currently, on many levels. Providing internet, phone services, and data plans, both giants have a wide selection of offers to choose from.

Both giants can claim to have the most area in the US extensively. But it is deeper than that. You would have to specify about which network we are talking. At some point, AT&T could easily boast about having the throne of 3G coverage. But currently, it has been replaced by the 4G LTE network coverage. And here, Verizon comes to play as the true leader of the 4G coverage years before AT&T made the switch.

Moreover, regarding 5G, both carriers offer speed and accessibility as their primary bread and butter. Verizon utilizes a fast mmWave network for its premium 5G coverage, an extremely pacy service yet over a limited range only. In contrast, AT&T relies heavily on a low-band network that expands over more areas of the country yet does not offer the same speed.

Finally, it is a close call on this one, but it all boils down to what you need. Speed or more coverage? So, no one is winning this round, but each carrier has an ace up their sleeves that can tip the scale in their favor.

In the age of streaming and digital services, it is rarely about the actual mobile services anymore. Customers currently make their choice based on the rewards and promotions that come with the plan. The clients’ dynamic needs require much more than simply the service itself. They need a hook to keep them attached to the program. The AT&T Verizon battle keeps raging but let us look at their offers.

Furthermore, if streaming is what you are after, Verizon might take the lead on this one. Verizon offers Disney+ with its unlimited plans, and the 5G Play More can even get you a Hulu and ESPN Plus subscription. Moreover, a step further than video streaming, Verizon offers six months of Apple Music with most of its plans. You can even find a way to juggle or combine Google’s Play Pass for more services.

AT&T is on the losing side of this battle, especially with two of its perks being dead already dead. AT&T offered six months of Stadia Pro on all plans. Stadia is over, and the other perk was an HBO MAX on unlimited and elite plans. After the new management ditched the deal, it only remained available for existing customers.

The AT&T Verizon competition is not only restricted to mobile phone services. They are two of the most prominent home internet providers in the US. Verizon Fios is a fully fiber-optic internet service. On the other hand, AT&T Fiber includes the company’s fastest internet speed plans. The companies also offer DSL, Fixed wireless, and 5G. In both cases, the fiber plans give clients more value. Providers’ coverage area is distinctive, and their operating maps do not overlap. So, you will end up with a choice between them, yet it is a healthy way of covering the fiber optic needs of the US.

AT&T might be taking a win on this one ever so slightly. Both providers grant an entry-level speed starting at three hundred megabits per second. Even though Verizon’s Fio’s 300Mbps plan is priced five dollars cheaper, it does not make it the winner. AT&T’s 500Mbps plan is more affordable than Verizon’s with the same speed, making it a better deal. Both companies offer direct pricing, none of these extra costs, and a limited offer approach, which is refreshing.

Finally, if this were an actual race, AT&T would have won it by an inch. It is mainly cheaper when you look at the bigger picture. AT&T is more affordable when you calculate the cost per Mbps, and it does win the perk war regarding internet services, even though it lost it in the mobile plan aspect. Luckily for you, as mentioned, the coverage area for both companies does not overlap, so that you will not be facing this dilemma anytime soon.

The AT&T Verizon competition keeps pushing the telecom sector forward in the US. Your choice between the two giants will funnel down to the area you live in and the plans you are interested in. a clear winner is not needed in this war, but the benefit is always you, the customer. When there is such good competition, the client will always be the winner since they will receive such competitive deals.

Inside Telecom provides you with an extensive list of content covering all aspects of the tech industry. Keep an eye on our Telecoms sections to stay informed and up-to-date with our daily articles.