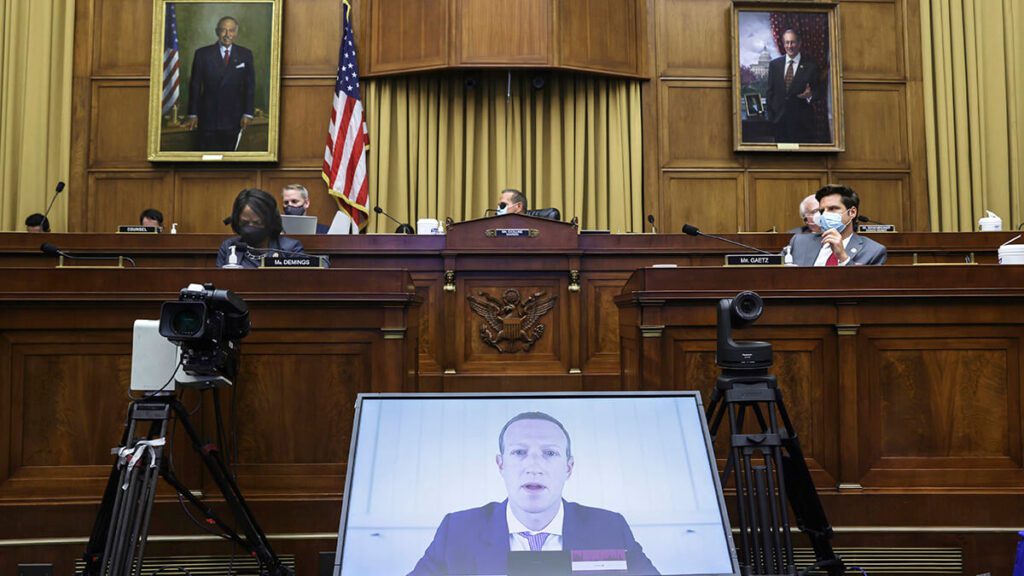 WASHINGTON (AP) — The Latest on testimony before a congressional committee by the CEOs of Facebook, Apple, Amazon and Google (all times local):

Democratic chairman of a House antitrust panel says Facebook is making money off dangerous lies that could have deadly consequences.

Rep. David Cicilline lodged the accusation at the tech company’s CEO, Mark Zuckerberg, Wednesday during a congressional hearing also featuring testimony from the heads of Apple, Amazon and Google.

Cicilline noted a series of popular conspiracy theories — including that the coronavirus pandemic is a hoax — that have thrived on Facebook’s platform during the deadly virus’ grip across the globe.

“It brings the most activity which, of course, produces great profit,” Cicilline said to Zuckerberg.

Zuckerberg offered assurances that the social network’s users don’t want to see misinformation in their feeds, so the company has taken big steps to scrub its site of inaccurate coronavirus claims. But that only invited more push back from Cicilline, noted out that just on Monday the company struggled to take down a video of pro-Trump doctors peddling misleading claims that Americans don’t need to wear masks and an unproven anti-malaria drug, hydroxychloroquine, as a sure-fire way to treat the virus.

The video raked in more than 20 million views before Facebook started removing it, with dozens of other versions of it still cropping up. Earlier in the hourslong hearing, GOP congressmen had complained that Facebook, YouTube and Twitter took down that same video at all, describing it as censorship.

Nodding to that political tightrope he’s walking on, Zuckerberg defended the company’s misinformation policies, “we’ve been quite aggressive in taking some of that down, as some of the questioning from the other side of the aisle has shown so far.”

U.S. lawmakers have repeatedly ripped the CEOs of Apple, Amazon, Google and Facebook while likening them to copycats, liars, bullies, drug dealers and traitors in an attempt to prove it’s time to crack down on their technology powerhouses.

The barrage of unflattering comparisons and allegations of misconduct unfolded Wednesday during an extraordinary hearing that summoned Apple CEO Tim Cook, Amazon CEO Jeff Bezos, Google CEO Sundar Pichai and Facebook CEO Mark Zuckerberg before a congressional committee. The committee is looking into allegations that the companies have been abusing the popularity of their products and services to stifle competition and innovation.

All four CEOs appeared via video because of the pandemic.

Lawmakers were particularly harsh on Google, whose dominant search engine serves as the main gateway to the internet, and Facebook, whose social network with more than 2 billion people has has had trouble blocking efforts to spread bogus information in attempt to sway elections and sow social unrest. Both Pichai and Zuckerberg insisted their companies have worked hard to fix any problems on their services and strive to improve their mostly free services to keep their users happy to they can continue to sell the ads that bring in most of their revenue.

Rep. David Cicilline, a Democrat, told Amazon CEO Jeff Bezos at a hearing Wednesday that evidence shows that the e-commerce giant is only interested in dominating the market and is “fundamentally anti-competitive.”

As chair of a House Judiciary panel, Cicilline is looking toward possible new legislation to update century-old antitrust laws. But Republican Rep. James Sensenbrenner rejects the idea that legislation is needed — showing it could be a difficult mission for Democrats in Congress.

The Bezos, along with the CEOs of Apple, Facebook and Google were answering lawmakers’ questions about their companies’ practices as a House panel caps its yearlong investigation of market dominance in the technology industry.

Amazon founder Jeff Bezos says he can’t guarantee that the company isn’t accessing seller data to make competing products, an allegation that the company and its executives had previously denied.

His comments came Wednesday during a congressional hearing into the market dominance of four tech giants — Amazon, Google, Facebook and Apple.

Regulators in the U.S. and Europe have been scrutinizing Amazon’s relationship with the businesses that sell on its site and whether the online shopping giant has been using data from the sellers to create its own private-label products.

“We have a policy against using seller specific data to aid our private label business,” said Bezos, in a response to a question from Rep. Pramila Jayapal, a Democrat from Amazon’s home state of Washington. “But I can’t guarantee to you that that policy hasn’t been violated.”