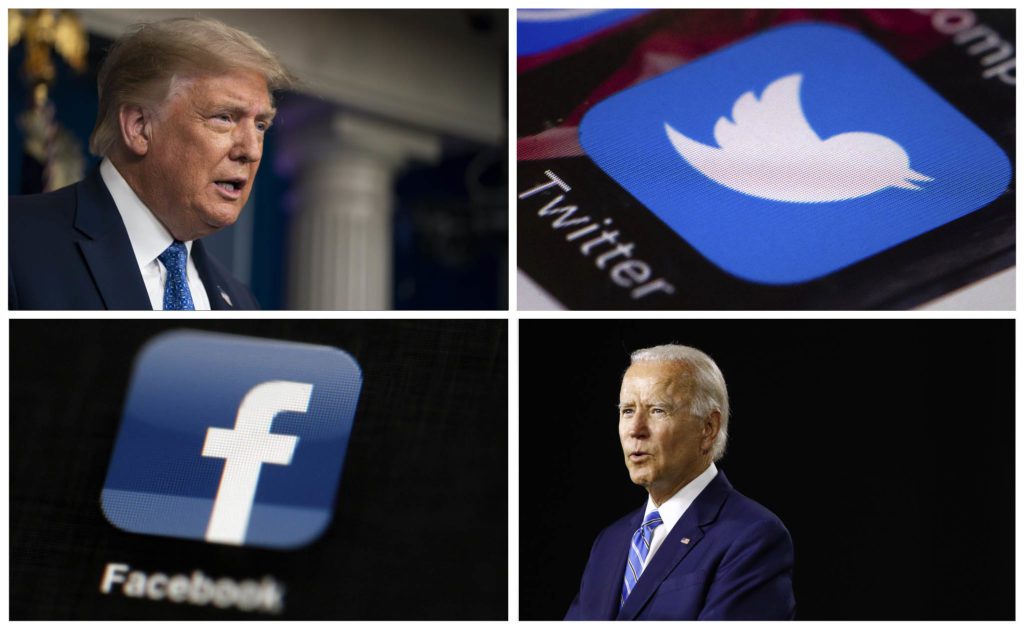 CHICAGO (AP) — Social media has become the target of a dueling attack ad campaign being waged online by the sitting president and his election rival. They’re shooting the messenger while giving it lots of money.

President Donald Trump has bought hundreds of messages on Facebook to accuse its competitor, Twitter, of trying to stifle his voice and influence the November election.

Democratic challenger Joe Biden has spent thousands of dollars advertising on Facebook with a message of his own: In dozens of ads on the platform, he’s asked supporters to sign a petition calling on Facebook to remove inaccurate statements, specifically those from Trump.

The major social media companies are navigating a political minefield as they try to minimize domestic misinformation and rein in foreign actors from manipulating their sites as they did in the last U.S. presidential election. Their new actions — or in some cases, lack of action — have triggered explosive, partisan responses, ending their glory days as self-described neutral platforms.

Even as the two presidential campaigns dump millions of dollars every week into Facebook and Google ads that boost their exposure, both are also using online ads to criticize the tech platforms for their policies. Trump is accusing Twitter and Snapchat of interfering in this year’s election. Biden has sent multiple letters to Facebook and attacked the company for policies that allow politicians, Trump specifically, to freely make false claims on its site. Biden is paying Facebook handsomely to show ads that accuse Facebook of posing a “threat” to democracy.

“Twitter is interfering in the 2020 Election by attempting to SILENCE your President,” claimed one of nearly 600 ads Trump’s campaign placed on Facebook

It’s “a huge departure from 2016,” said Emerson Brooking, a fellow at the Atlantic Council’s Digital Forensic Research Lab, a Washington think-tank. “If you were leading the Trump or Clinton campaign, you weren’t writing letters to Facebook all day long. It wasn’t so much a central campaign issue. Now it seems like it very much is.”

Americans, after all, are on high alert about the platforms’ policies after discovering that Russian trolls posted divisive messages, created fake political events and even used rubles to buy Facebook ads intended for U.S. audiences in the 2016 election. Research already shows the Kremlin is at it again.

Since the last presidential election, Facebook and Twitter have banned voting-related misinformation and vowed to identify and shut down inauthentic networks of accounts run by domestic or foreign troublemakers. Before this year’s election, Twitter banned political ads altogether, a decision a company spokesman told the AP it stands behind. And Facebook, along with Google, began disclosing campaign ad spending while banning non-Americans from buying U.S. political ads.

But calls to deflate Big Tech’s ballooning power have only grown louder from both Democrats and Republicans, even though the two parties are targeting different companies for different reasons to rally supporters.

Those politics will no doubt be on full display Wednesday, when four big tech CEOs, Facebook’s Mark Zuckerberg, Amazon’s Jeff Bezos, Google’s Sundar Pichai and Apple’s Tim Cook, testify to a House Judiciary Committee panel as part of a congressional investigation into the tech industry’s dominance.

Biden has focused on Facebook, with a #MoveFastFixIt campaign that admonishes Facebook for not doing enough to protect users from foreign meddling or being duped by falsehoods, particularly those spread by Trump about mail-in voting.

His campaign just last month spent nearly $10,000 to run ads scolding the company on its own platform.

“We could lie to you, but we won’t,” says one of Biden’s ads. “Donald Trump and his Republican allies, on the other hand, spend MILLIONS on Facebook ads like this one that spread dangerous misinformation about everything from how to vote to the legitimacy of our democratic process.”

Despite criticizing Facebook, Biden’s campaign said it’s still purchasing millions of dollars in Facebook ads because it’s one of the few ways to counter Trump’s false posts — since Facebook won’t fact check him.

The ads are also a cheap and effective way for the campaigns to rally supporters who are unhappy with the platforms, said Kathleen Searles, a Louisiana State University political communications professor.

“We do know that anger can be very motivating — it motivates them to get their name on an email list, or donate $20,” Searles said. “What better way to get people angry than a faceless platform?”

While Biden has focused on Facebook, Trump has honed in on Twitter, and occasionally Snapchat, with his campaign running online ads that accuse both companies of “interfering” in the election.

Twitter became a Trump campaign target after the company rolled out its first fact check of his inaccurate tweet about voting in late May. Twitter has since applied similar labels to five other Trump tweets, including two that called mail-in ballots “fraudulent” and predicted that “mail boxes will be robbed” if voting doesn’t take place in person.

Trump responded by signing a largely symbolic executive order challenging Section 230 of the Communications Decency Act, which provides protections from lawsuits for internet companies that have served as a bedrock for unfettered speech online.

“It’s preposterous that Silicon Valley, the bastion of diversity and liberalism, is terrified of intellectual diversity and conservative voices,” Trump deputy national press secretary Ken Farnaso said in a statement.

Republican leaders have since joined in railing against Twitter.

This month, Rep. Jim Jordan, a firebrand conservative from Ohio, demanded Twitter hand over a full accounting, including emails, of how it decided to fact check the president. Saying “big tech is out of control,” Republican Sen. Ted Cruz joined dozens of conservative media outlets, Trump staffers and politicians who waged a two-day campaign last month urging their Twitter followers to ditch the platform and join Parler, a social media app that does not moderate its content as closely.

Facebook could be next for a face-off with the president and his allies now that the company has vowed to label any posts — Trump’s included — that violate its rules against voting misinformation or hate speech. Facebook has yet to take such action, though.

“Social media censorship is going to be a very potent campaign issue,” Brooking said. “And there’s going to be incentive from a number of folks running for office in 2020 to push the envelope still further, to try to invite more and more social media moderation because they see it as a potent political stunt.”