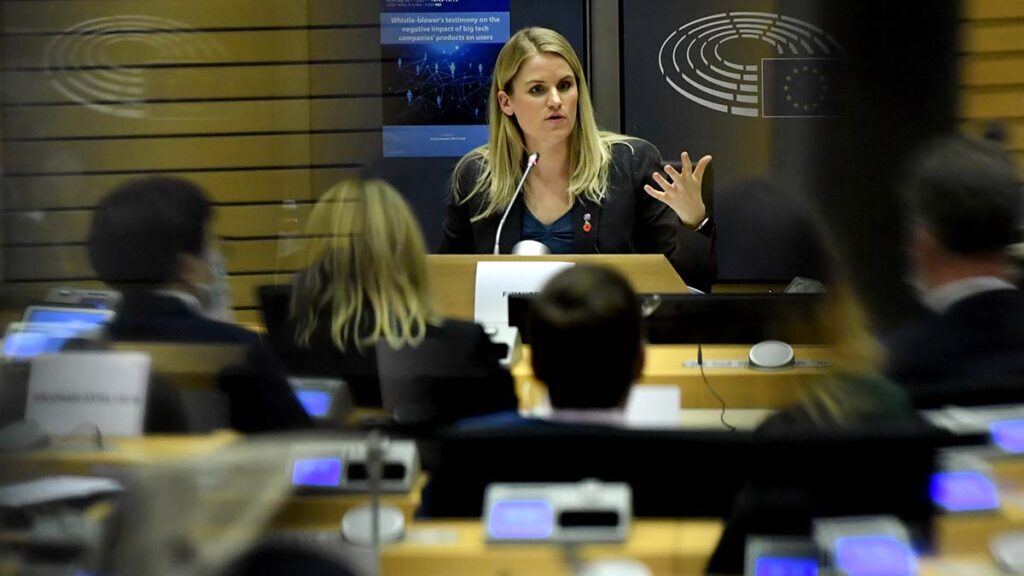 European lawmakers have pioneered efforts to rein in big technology companies and are working to strengthen those rules, putting them ahead of the United States and other parts of world that have been slower to regulate Facebook and other social media giants facing increasing blowback over misinformation and other harmful content that can proliferate on their platforms.

While Europe shares Western democratic values with the U.S., none of the big tech companies — Facebook, Twitter, Google — that dominate online life are based on the continent, which some say allowed European officials to make a more clear-eyed assessment of the risks posed by tech companies largely headquartered in Silicon Valley or elsewhere in the U.S.

The question, Penfrat said, should also be: “Why is the U.S. so much lagging behind? And that may be because of the immense pressure from the homegrown companies” arguing to officials in Washington that stricter rules would hobble them as they compete with, for example, Chinese rivals.

Drawing up a new package of digital rules for the 27-nation European Union is getting a boost from Facebook whistleblower Frances Haugen, who answered questions Monday in Brussels from a European Parliament committee. It’s the latest sign of interest in her revelations that Facebook prioritized profits over safety after the former data scientist testified last month to the U.S. Senate and released internal documents.

If the EU rules are done right, “you can create a game-changer for the world, you can force platforms to price in societal risk to their business operations so the decisions about what products to build and how to build them is not purely based on profit maximization,” Haugen told lawmakers. “And you can show the world how transparency, oversight and enforcement should work.”

Since Haugen left Facebook, the company has renamed itself Meta as it focuses its business on a virtual reality world called the metaverse.

“I’m shocked they picked this name,” she said. In the book that inspired the term, “the metaverse is a dystopian thing, that people’s lives are so unpleasant that they need to hide in the system for half of their day.”

Haugen has been on a European tour, meeting lawmakers and regulators in the EU and United Kingdom who are seeking her input as they work on stricter rules for online companies amid concerns that social media can do everything from magnify depression in teens to incite political violence. A wider global movement to crack down on digital giants is taking cues from Europe and gaining momentum in the U.S. and Australia.

Europe has been a trailblazer in applying more scrutiny for big tech companies, most famously by slapping Google with multibillion-dollar fines in three antitrust cases. Now, the European Union is working on a sweeping update of its digital rulebook, including requiring companies to be more transparent with users on how algorithms make recommendations for what shows up on their feeds and forcing them to swiftly take down illegal content such as hate speech.

The rules are aimed at preventing bad behavior, rather than punishing past actions, as the EU has largely done so far.

France and Germany also are bringing in legislation requiring social media platforms to take down illegal content quicker, though these rules would be superseded by the EU ones, which are expected to take effect no earlier than 2023.

Meanwhile, the U.S. has only recently started cracking down on big tech companies, with regulators fining Facebook and YouTube over allegations of privacy violations and the government suing over their huge share of the market in the last couple of years. American lawmakers have proposed measures to protect kids online and get at the algorithms used to determine what shows up on feeds, but they all face a long road to passing.

While Haugen’s testimony and the documents she has provided have shed light on how Facebook’s systems work and spurred efforts in the U.S., European lawmakers may not be that surprised by what she has to say.

“The fact that Facebook is disseminating polarizing content more than other kinds of content is something that people like me have been saying for years,” said Alexandra Geese, a European Union lawmaker with the Green party. “But we didn’t have any evidence to prove it.”

European lawmakers have been interested in digging in to algorithms, as they work on requiring platforms to be more transparent with users on how artificial intelligence makes recommendations on what content people see.

“It’s rather about looking under the hood and regulating the kind of mechanisms that a company, a platform established to disseminate content or to direct people down rabbit holes into extremist groups,” Geese said. What Haugen is doing is “shifting the focus, and I think this is something that many other people before didn’t see.”

In the U.K., which left the European Union last year, the government also is working on raft of digital regulations, including an online safety bill that calls for a regulator to ensure tech companies comply with rules requiring them to remove dangerous or harmful content or face big financial penalties.

For the European Union, there’s still a lot of wrangling over the final details of the rules, two packages known as the Digital Services Act and the Digital Markets Act, which the EU Commission hopes to get approved next year.

Free speech campaigners and digital rights activists worry that EU rules requiring platforms to swiftly remove harmful content will lead to overzealous deletion of material that isn’t illegal. In a bid to balance free speech requirements, users will be given the chance to complain about what content is removed.

In London, there’s been a similar debate over how to define harmful but illegal content.

Both the EU and U.K. rules call for hefty fines worth up to 10% of a company’s annual global turnover, which for the biggest tech companies could amount to billions of dollars in revenue.