Google Pixel Tablet Vs. iPad: How The Tables Have Turned 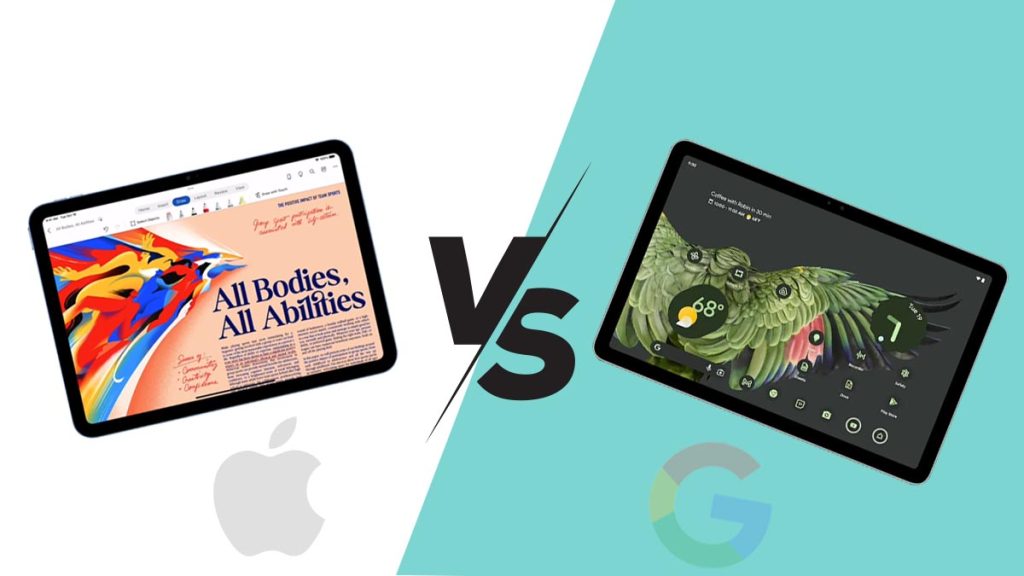 Since the beginning, Samsung and Apple have been pitted against one another. In recent years, however, Google has joined the fight partly due to its innovative approaches. The company is going toe to toe with Apple through Google Pixel Tablet. The globe is waiting with bated breath to see how Google Pixel Tablet Vs. iPad is going to play out. To not be outdone, Apple has decided to rework its iPad, bringing Apple’s 10th generation iPad to consumers.

Earlier this month, Apple announced the 10th generation iPad. The new iPad will become available on October 26th in 4 vibrant colors (silver, blue, pink, and yellow). The user chooses between a capacity of 64GB or 256GB and a Wi-Fi or a Wi-Fi + cellular model.

The 10.9-inch (diagonal) display relies on a Liquid Retina display which delivers brighter colors and deeper blacks. The device has a fingerprint-resistant oleophobic coating and supports the 1st generation of the Apple Pencil through a USB-C adapter.

The system operates on the powerful A14 Bionic chip with a 6-core CPU, 4-core graphics, and a 16-core neural engine.

The camera on this device is impressive. It’s a 12MP Wide camera, ƒ/1.8 aperture that features Autofocus with Focus Pixel, Auto image stabilization, and Digital zoom up to 5x. The front camera is a Landscape 12MP Ultra-Wide camera 122° field of view ƒ/2.4 aperture with Lens correction, Retina Flash, Auto image stabilization, Burst mode, and much more.

The Wi-Fi +cellular models offer the options for either a Nano-Sim or an eSIM. All models operate on the iPadOS 16 system.

The iPad was not the only one that got a rework. According to the press release, The iPod Pro is “supercharged by the M2 chip”. This device is also set to be released on October 26th in 2 colors (Silver, Space gray). The product will be available in 2 sizes: 11-inch and 12.9-inch. Wi-Fi-only and Wi-Fi + cellular versions will be available for each model. The capacity ranges from 128GB to 2TB.

Despite the different sizes, both models feature a LED-backlit Liquid Retina display, a fingerprint-resistant oleophobic coating, and an anti-reflective coating. It supports the 2nd generation of Apple Pencil. The 12-inch iPad Pro has additional features, such as a 2D backlighting system with 2596 fullarray local dimming zones.

The chip for the new iPad Pro is the Apple M2 chip. It utilizes an 8-core CPU with four performance and four efficiency cores, a 10-core GPU, a 16-core Neural Engine, and a 100GB/s memory bandwidth.

The camera is a unique system that involves wide and ultra-wide cameras. The wide camera has a 12MP, ƒ/1.8 aperture, while the ultra-wide has a 10MP, ƒ/2.4 aperture, and 125° field of view. Both feature five-element lenses.

The Wi-Fi +cellular models offer the options for either a Nano-Sim or an eSIM. All models operate on the iPadOS 16 system.

Apple instigated the fight when it announced that the 10th-generation device would be released this month, months before Google Pixel Tablet is scheduled to hit the market, hence, the tablet vs. iPad debate.

The Google Pixel Tablet’s surprising selling point was its accompanying fabric-covered dock that houses a speaker. The new look helps the Pixel Tablet blend in with Nest devices (a line of smart home products that includes smart speakers, smart displays, streaming devices, etc.). The tablet itself will bind to the dock using strong magnets. While it may look like a Nest device, the inside does not match the outside. So, Google aims to offer you a Nest device-looking item with the functionality and practicality of a standard tablet.

Apple announced its plans to bring similar functionality to its new iPads within the following year. The idea is based on the same premises as the Google Pixel Tablet. The tablet versus iPad debate here involves a race of which company can bring this function to the table first. It is not farfetched for Apple to make good on its word. The tech giant often hosts early spring events, announcing new updates along with its latest technology.

Is It a good move?

This turn of events is an intelligent move on Apple’s part. It allows it to enter the smart home market with a device that people already have, whereas google would require the purchase of a machine. However, this rework to the iPad and iPad Pro lineup came with a very high price tag. The iPad Pro’s retail price starts from 799$ while the iPad’s starts from 499$.

Companies compete with one another over similarly functioning products all the time. However, Google is quickly gaining momentum in the industry and catching up to the rest of the giants. Apple was smart to provide a device followed by the update instead of making people wait for a whole device. One cannot fault Apple for leveraging what it can to stay ahead. Ultimately, we’ll need to wait for both releases to determine who won this fight.