Low-tech Japan challenged in working from home amid pandemic 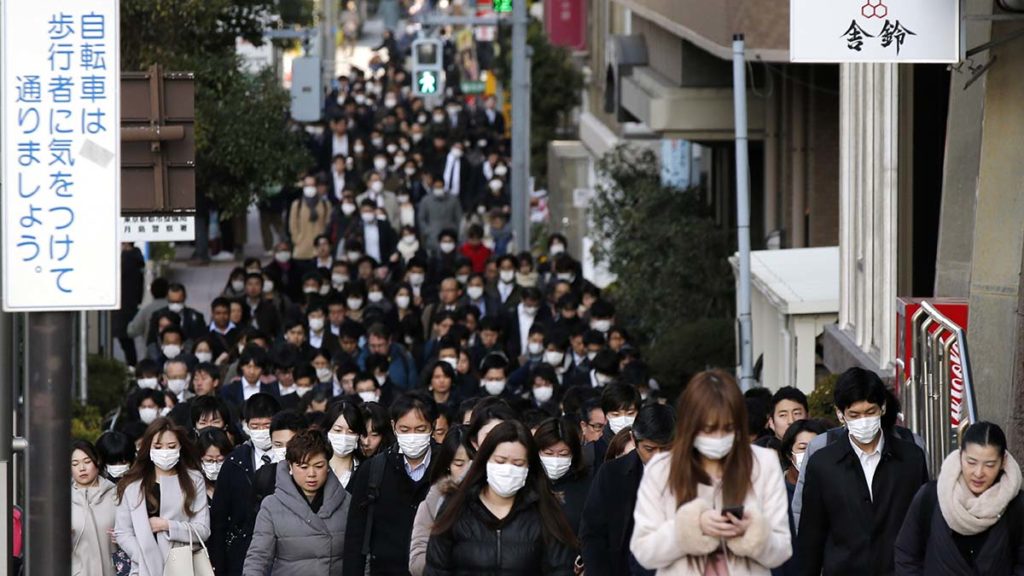 TOKYO (AP) — When the Japanese government declared an emergency to curb the spread of the coronavirus earlier this month and asked people to work from home, crowds rushed to electronics stores.

So much for social distancing.

Many Japanese lack the basic tools needed to work from home. Contrary to the ultramodern image of Japan Inc. with its robots, design finesse and gadgetry galore, in many respects the country is technologically challenged.

But the bigger obstacle is Japanese corporate culture, experts say. Offices still often rely on faxes instead of email. Many homes lack high-speed internet connections, and documents often must be stamped in-person with carved seals called “hanko,” which serve as signatures. So many Japanese really cannot work remotely, at least not all the time.

A survey by YouGov, a British market researcher, found only 18% of those recently surveyed were able to avoid commuting to school or work, even though a relatively high 80% of people in Japan are afraid of catching the virus.

In India, nearly 70% of those surveyed were staying home. In the U.S., it was about 30%, according to YouGov.

One factor, says Yuri Tazawa, a pioneer in Japan of “teleworking,” or working from home, is that Japanese workers often do not have clearly defined jobs like Americans do, so companies expect their staff to be in constant communication with each other, working as teams.

“But this is a matter of life and death for the workers and their families,” said Tazawa, president of Telework Management Inc. “We need to do immediately what we can do now.”

Tazawa is offering an online crash course on how to immediately start working from home, using just mobile phones, if a personal computer is not available. She calls the approach a “hypothetical cloud office.”

Unlike regular Zoom meetings, in which workers check in and out for discussions, she is proposing using Zoom for just voice connections, keeping it on throughout the work day so that employees who would normally share an office can feel as if they’re in the same room.

“Teleworking is so important in the fight against the coronavirus,” said Tazawa.

Some of Japan’s biggest companies, like Toyota Motor Corp. and Sony Corp., already have announced work-from-home policies. The main problem is with the small and medium-sized businesses which make up about 70% of the economy.

Nicholas Benes, a corporate governance expert who has been offering a free webinar on teleworking for Japanese, said interest was surprisingly low.

“Telework requires that managers trust and delegate much more decision-making to employees because it takes too much time in email or Skype to check with the boss,” said Benes, who heads the Board Director Training Institute of Japan, a non-profit that offers management and governance training.

Japanese companies still rely on nuances of face-to-face interaction, or being able to “smell the air,” or “read the air,” Benes said, using common vernacular expressions.

And then, there’s the fax machine.

A third of Japanese households have faxes, according to a government study.

It’s rare to find an office that doesn’t have one, unless it’s a futuristic company like SoftBank that frowns on such old-fashioned practices. Many respectable institutions shun emails and insist on receiving requests for information or other documentation by fax only.

So as the number of coronavirus infections grows, urban commuter trains are only slightly less crowded than their usual jam-packed state.

Futoshi Takami, a “salaryman,” as Japanese workers are called, says he had to work from the office until mid-April, when he was finally told he could work from home. But so far, he’s gotten few directions about what he’s supposed to be doing. He might soon be assigned to take some online classes, he said.

Takami, who asked that his employer not be identified, said he has been doing some soul-searching about workplaces that seem to value rules over human life.

“I am going to devote my time to think about what it is I really want to do with my life,” he said.