The new frontier of smart farming powered by 5G 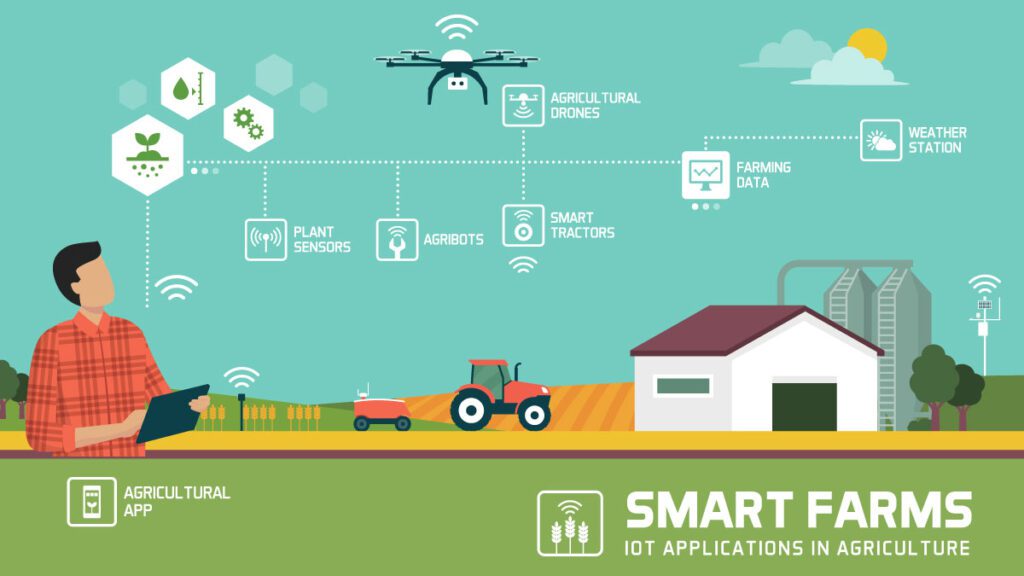 A new green revolution is coming our way, and it looks promising as the prospect of 5G comes ever closer within humanity’s grasp.

According to a study done by the United Nations, agriculture is a multimillion-dollar industry and one of the largest in the world, accounting for almost 1 percent of GDP in the UK, 6 percent in the U.S., and 12 percent in Australia.

It’s only going to go upwards as the demand for food and produce is increasing, as the world approaches eight billion in population.

However, as any big industry, its Achilles’ heel lies hugely affected by changes in temperature and moisture levels (among other things), meaning that these problems surface when the damage has already been done.

The digitization of farms will not only save billions in waste and losses, but also improve the quality of food that we consume. “The collective ability of farmers to produce more food more efficiently may be how the world feeds the global population, which will hit nine billion by 2030,” the study by the UN stated.

Thus making the deployment of 5G to be a saving grace for farms globally, especially in the fight against climate change.

Each degree Celsius increase in temperature could reduce global yields of soybeans by 3 percent, wheat by 6 percent, and corn by 7 percent, according to a report by the National Academy of Sciences.

“One reason is the effects of climate change on animal pests and diseases, as these changes can make them expand into new regions, creating invasive species that can be detrimental to crops,” the report added.

With this in mind, how can 5G simultaneously benefit farms and climate change in one swoop?

The advantage of smart farming is that it can calculate and estimate a wide array of risk factors as well as present farmers with important data to plan around these said risks.

It allows decision-makers to take the necessary actions with the best possible information presented to them while providing recommendations in the scope of efficiency and resource-friendly approaches.

Accurate weather forecasts, information on soil conditions, as well as maturity level of plants and insect detection, are all valuable information that demand drastic action from farmers to reduce waste and cost.

The Internet of Things (IoT) also has a huge role to play; an example of this is through autonomous vehicles, where managers can provide specific instructions on where and how to deliver certain crops, especially with products that need extra care such as milk, which requires immediate processing thus greatly increasing its quality.

Commonly known as “smart farming,” precision farming aims at giving extremely accurate treatments to crops; gone will be the days of treating entire fields under the same brush under the same level of care all around, but rather provides farmers with specific information about each crop row and what is needed.

This will not only reduce the waste of water, food, fertilizer, and pesticides, but will also give centralized information about the land and crops in real time.

With the help of Artificial Intelligence (AI) and machine learning algorithms, it will give farmers insight into predicting the susceptibility of crops to disease, and inform farmers of where exactly pests and diseases are located.

The drones are coming

The emergence of 5G-powered drones will be the turning point for farmers far and wide; equipped with weed scanners and crop sprayers, they will have the ability to scan entire fields, apply pesticides at a more precise rate.

While many fear that the role of manual labor will fade, they still have a role to play in what’s to come; the drones will provide them with the information about the patches that need the most care, efficiently allocating their time accordingly.

An example of this can be seen through Volocopter’s new VoloDrone, which is an unmanned, fully electric, heavy-lifting utility drone capable of carrying loads up to 200kg. The drone can transport a wide array of things anywhere on the farm, such as transport boxes, liquids and equipment.

Or acting as an air-based scarecrow to fend off birds in the vicinity with the sound of its wings.

This is where AI-powered sensors come into play, which have the ability to detect, in real-time, data on weather, air, soil parameters, crop growth, and animal behavior. An example of this can be seen through sensors equipped onto drones to analyze nutrient status.

The data collected can be then merged with weather and a number of agronomical factors to apply an optimal quantity of fertilizer. Experiments done by Chinese telecom titan Huawei over the span of two years, showed that it was successful in decreasing the amount of nitrogen fertilizer by 10 percent without any yield loss.

Locating and monitoring the status of valuable livestock is considered critical to all farmers alike. Accurate tracking and monitoring can determine the health of cows, their food intake, and even their fertility level, which allows farmers the ability to make the best possible decision.

According to a study done by Huawei, 5G will enable very high levels of connectivity and geo-location services that can reduce cost, while increasing the performance and wellbeing of livestock far and wide.

Water is the most valuable resource humanity has, which is why every drop is critical, especially around dry, arid, and remote areas.

In a trial partnership with Algeria’s mobile network operator Djezzy, Nokia has created what it calls a Worldwide IoT Network Grid (WING) to equip Algerian peach farmers with practical data to help them achieve better yields. Soil probes buried 120cm under an irrigation line collect and send back data about the soil that allow the farmer to track soil moisture, water patterns and salinity.

The readings are analyzed so the farmer can accurately manage irrigation cycles and soil nutrition. After one month, Nokia’s trial saw the farmer reduce water consumption by 40 percent on a single irrigation line for one hectare, and increase his revenues up to 5 percent per hectare. WING operates on all mobile networks, but such trials will only be improved with 5G.

The importance of public/private sector partnerships

It is very important to note that many of the examples stated were done using the cooperation, funding, and aid of governments worldwide, relying on the private sector alone to make such a detrimental shift will only agonizingly prolong the stages ahead.

Thus partnerships need to be formed to encourage the need for different sectors and players to work together to make 5G applications a reality.

This has been highlighted within several reports by the UNDP such as the case of the city of Cauayan in the Philippines, which showed how an agricultural town can become a smart city through leveraging 5G technology.

The city government has partnered with the largest telco in the Philippines to pioneer the use of a 5G network in the country. The government also vowed to train and develop farmers’ skills and knowledge through the Digital Farmers Program, so they are better equipped to use these technologies.