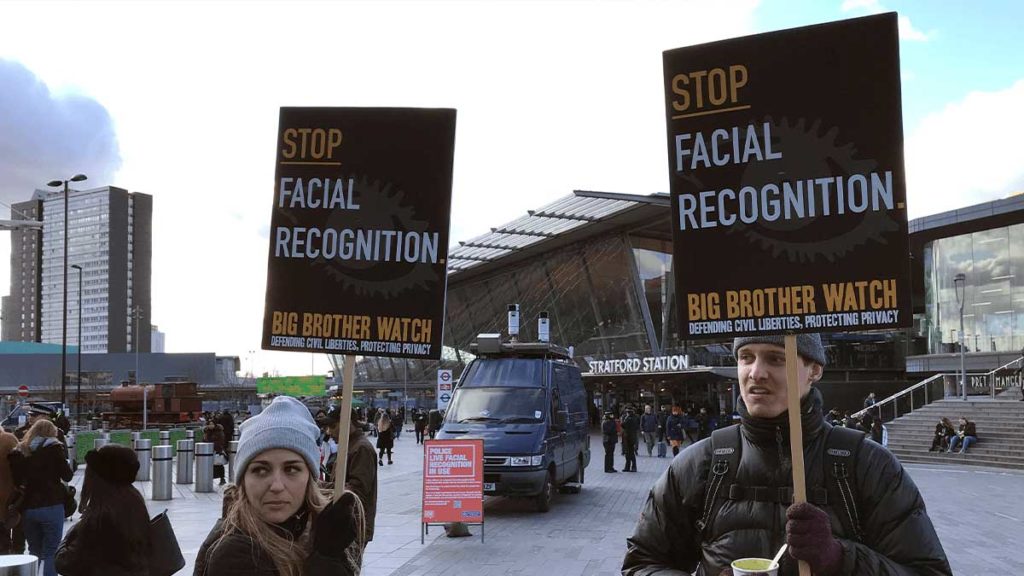 Rowlands has long narrow blue triangles and thin white rectangles criss-crossing her face. Hart has a collection of red, orange and white angular shapes on hers.

They’re two of the four founders of the Dazzle Club, a group of artists set up last year to provoke discussion about the growing using of facial recognition technology.

The group holds monthly silent walks through different parts of London to raise awareness about the technology, which they say is being used for “rampant surveillance.” Other concerns include its lack of regulation, inaccuracy and how it affects public spaces.

Some 19 people attended the most recent event in the East London neighborhood of Shoreditch, and anyone can take part in the walks, in which participants have to paint their faces in a style called CV Dazzle.

The technique, developed by artist and researcher Adam Harvey, is aimed at camouflaging against facial detection systems, which turn images of faces into mathematical formulas that can be analyzed by algorithms. CV Dazzle – where CV is short for computer vision – uses cubist-inspired designs to thwart the computer, said Rowlands.

“You’re trying to kind of scramble that by applying these kind of random colors and patterns,” she said. “The most important is having light and dark colors. So we often go for blacks and whites, very contrasting colors, because you’re trying to mess with the shadows and highlights of your face.”

A similar technique was used extensively in World War I to camouflage British naval ships and confuse opponents about the actual heading or location of the ships.

To test that their designs work, they use the simple face detection feature on their smartphone cameras.

“I can see that I’m hidden, it’s not detecting me,” Rowlands said, checking her phone to see her face doesn’t have a square around it.

The rise of facial recognition technology is being tested and spreading in developed democracies after aggressive use in some more authoritarian countries like China.

Britain has long been used to surveillance cameras in public spaces to counter security threats, and London is ranked as having one of the world’s highest concentrations of closed-circuit television cameras. But that acceptance is being tested as authorities and corporations increasingly seek to deploy a new generation of cameras with facial recognition technology while activists, lawmakers and independent experts raise concerns about mass surveillance, privacy, and accuracy.

Other designers have come up with countermeasures like sunglasses that reflect infrared light to blind cameras.

“There is a movement of resistance against facial recognition that we are actively participating in and we want to kind of further initiate,” said Rowlands.

Rowlands, Hart and two other artists founded the Dazzle Club in August, following news that London’s King’s Cross district — a busy transport hub where many big offices are being built rapidly — had quietly experimented with live facial recognition cameras without public knowledge or consent, sparking a backlash.

London police recently started using live facial recognition cameras on operational deployments. Last week officers arrested a woman wanted for assault after the cameras picked her out of a street crowd on a busy shopping street. Police say new technology is needed to keep the public safe and images of innocent people are deleted immediately.

Public attitudes to facial recognition technology in Britain appear to be mixed, according to one survey last year, which found most people said they don’t know enough about it but nearly half said they should be able to opt out.

The Dazzle Club’s founders say they’re worried about the effect that the technology has on people in public if cameras are collecting their biometric data — facial images — without clearly explaining what’s being done with it.

“We’re having to adjust our behavior in public space in a way that I think is problematic,” said Hart.

Read more AP stories on developments in technology at https://apnews.com/apf-technology