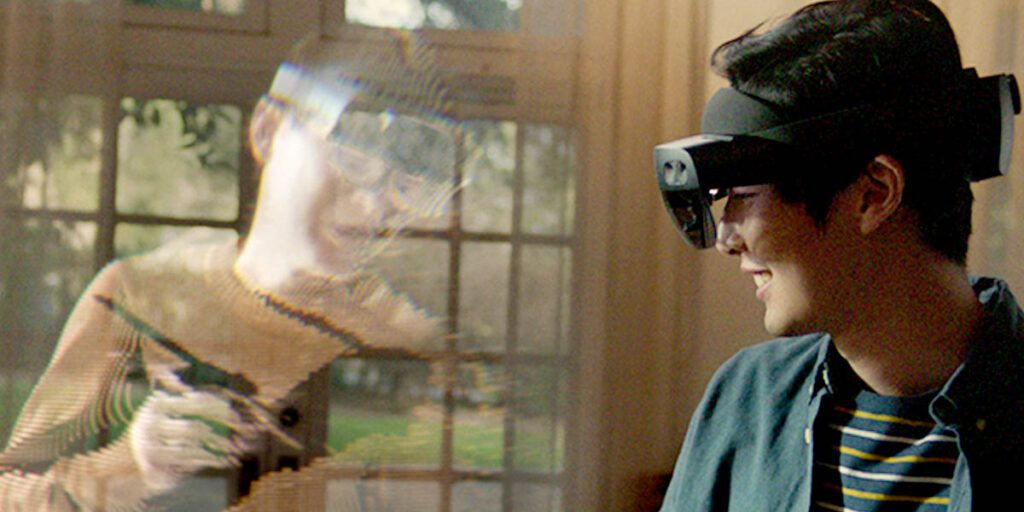 Microsoft soon releasing its most advanced futuristic technology for users to collaborate in augmented reality.

One of the biggest names associated with communicative collaboration in our present time is Microsoft.

This has been highlighted in the past year after the emerge of the COVID-19 pandemic and organizations transitioning into a more flexible remote work environment.

Users have been eagerly looking forward to Microsoft’s leading technology to be released. The company that set the grounds for the technical world since the start has created this hi-tech technology easing collaboration and app creation.

Created with multiple virtual and enhanced reality headset, users will be able to interact both physically and virtually from different locations in an effective and sufficient way, and most importantly it will break down the intense work environment linking the employees and employers to each other into a smoother process.

You may be wondering as to how this technology will present an advanced virtual presence with shared interactive experiences from anywhere in the world. This will happen by using any device using mixed reality applications.

Microsoft Mesh’s focus lies in numerous aspects such as feeling the other user’s presence as if you are sharing a room, experiencing the work process between employees and employers with the interactive aspect of this technology, expanding the user’s remote expertise, working alongside each other virtually, and many more.

One of the main reasons why Microsoft created this technology is to connect users with new power and dimensions, eye contact and body language engagement, facial expressions, and many more collaborative interactions typically needed for any work process.

As one of the worlds more influential tech companies, it decided to release this progressive technology after a wave of remote work taking over the work environment led by the pandemic.

Microsoft Mesh emerged as a result of employees around the world feeling disconnected from their work environment, and as technology took over, the employees personality began to dim with time.

According to Steef-Jan Wiggers, this technology will bring support for various devices ranging from alluring head mounted displays such as Microsoft HoloLens released in the 2016, the VR system Oculus Quest for the second and third dimensional volumetric experience to present volumetric video capture, to phones and tablets on IOS and Android for convenience, all the way to the fully tethered experience in PCs and Mac for two-dimensional viewpoint.”

For many years, AI has been taking over almost every technical creation, therefore critical AI powered skills will be included in its creation and design.

The company will bring multiple apps for its users such as Teams, Dynamics 365, and partners.

Built on Microsoft Azure; Microsoft’s computing system, this technology will ease up to its users building the right virtual connection between organization and clients they are looking for through cutting-edge virtual meetings, design sessions, advanced and enhanced remote assistance.

The company is looking to expand the way towards more remotely accessible social gathering processes and meet-ups as “virtual reality is the fourth wave in computing led by Mainframes, PCs, and finally Smartphones”, according to Nishant Thacker.

Yet despite its foreseen success, this technology is facing several issues standing in the way of developers, stopping them from designing the immersive experiences presented by this technology.

The most noticeable issue developers are facing is “representing people in Mixed Reality (MR) with the right number of realistic features, as it takes massive amount of time and resources for them to present this feature in the technology.

As we are all connected to each other through this overtaking wave of technology, we always have different point of views and perspectives surrounding the expansion and diversity taking place in the technical world.

Naturally, as we find several individuals empowering this fast-pasted digital and technical development and growth, others do not.

When it comes to what some might perceive as “controversial technology”, individuals from the digital world expressed their concerns towards this.

Some individuals expressed their worry concerning the hardware and tools needed to use this technology. This is steered by Microsoft’s recently altered vision towards VR avatars with photorealistic interaction needed for future meetings. To these individuals, these avatars represent the detachment of physical interaction.

Another concern was the HoloLens 2; since users will have to scan themselves into virtual reality to enable holoportation, and this can happen through the “Hololens 2” and its hardware. As it implies any user with the primal HoloLens; released in 2016, will not be able to carry out the required work, especially that Microsoft developers keep adding feature after feature to the HoloLens 2 product.

Ultimately, as our perception of Virtual Reality is in a constant loop of change, so is the technology we are basing our perception on. Mixing virtual reality with workspace will build the core for the upcoming future work environment.

As one of the world’s most influential tech companies, Microsoft will provide their audience with the merge of human visual fantasy and workspace, which can be very attractive and appealing to companies and organization as it leaves them with the option of expanding their field of work, line of expertise, and finally, visual and human creativity.