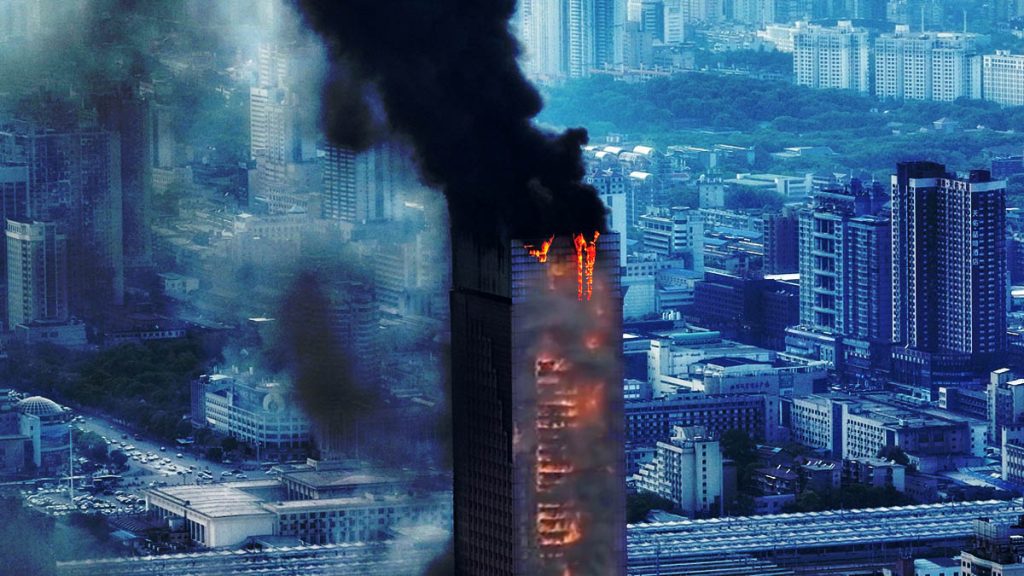 On Friday afternoon, September 16th, a massive fire broke out in the China Telecom building, a regional office in China’s Hunan province in South-Central China.

A 218m building, 42-story structure completed in 2000 and is located near a major ring road in Changsha, a city with a population of around 10 million individuals.

As thick plumes of black smoke rose from the building, and completely engulfed one side of the building authorities dispatched 280 firefighters and 36 firetrucks and extinguished the fire within ten minutes.

A video on social media showed hundreds of people running away from the structure as burning rubble fell from the top stories. Thankfully, no passersby was injured by any of the falling debris.

According to an outside observer, a shop staff member working near the building, the China Telecom building fire started because of an external air conditioning unit.

According to the staff member, the glass from a few of the windows on the front wall burst and fell off the building.

Chinese Building Fires Are a Problem

The country is notorious for its lack of fire safety regulations, and the China Telecom building fire was only one of many, much worse incidents.

Last year in July, according to official media sources, a warehouse fire in the northeastern province of Jilin resulted in at least 15 fatalities and at least 25 injuries.

One month prior to that, a martial arts school in northern Henan Province suffered a fire that killed 18 people, most of whom were children. The incident sparked an outcry about fire safety regulations in the country’s active real estate and construction sector.

Additional fires in Beijing’s migrant neighborhoods claimed the lives of 20 people in 2017, while a fire that engulfed a 28-story Shanghai apartment building in 2010 killed 58 people.

And of course, we cannot forget the explosion of a large chemical plant in Shanghai that was heard up to six kilometers (4 miles) away that happened just this June.

Such tragedies can be avoided if the country enforced laws more strictly that oblige building contractors to include fire safety measures, such as fire escapes, smoke detectors, and water sprinklers.

China Telecom Corp Ltd. Is a Chinese corporation that operates domestically, with a focus on telecommunications and associated industries.

After the China Telecom building fire, the company reported no loss of connection to any of its customers, however, there were several complaints that some were unable to access the internet entirely for a short time.