Blizzard: A Thread Leading Microsoft into the Metaverse 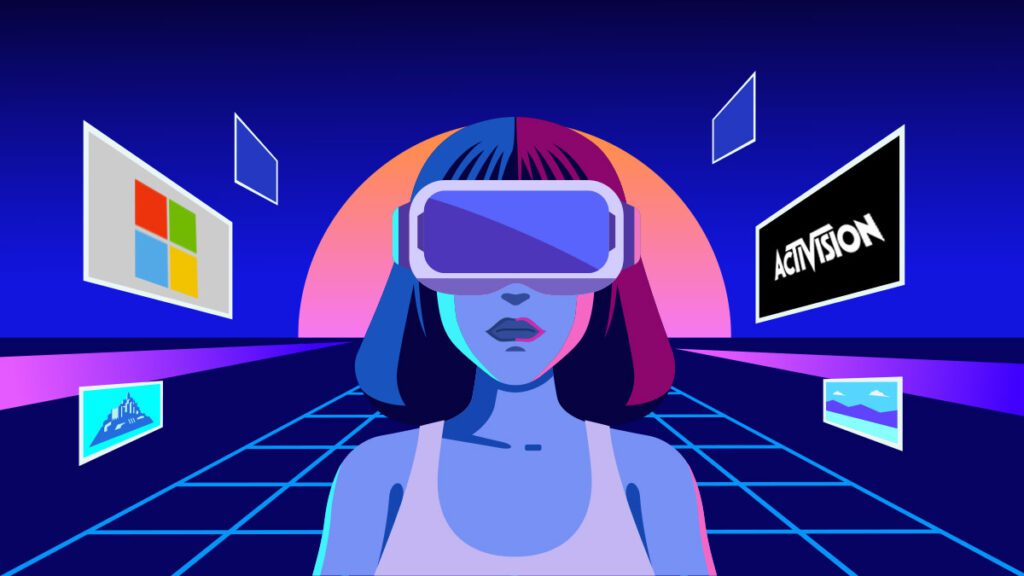 When Microsoft unveiled its plans to acquire gaming titan Activision Blizzard on January 19, the tech scene was swift away with one newsflash. A deal, if it came to fruition, could be commemorated in Microsoft’s history as the first stone that pathed its way into the Metaverse.

The $75 billion deal’s announcement was led by a 15-minute investor and media call with highly ranked officials from both Microsoft and Activision fixating their verbal attention on the term ‘Metaverse.’

“When we think about the vision for what a metaverse can be, we believe there won’t be a single centralized metaverse,” Microsoft’s CEO, Satya Nadella, expressed during the call.

“We need to support many Metaverse platforms,” he added.

Experts believe that the Big Tech giant’s ambitious move to enter the gaming scene with one of the leading gaming titans in the industry is the first step for it to place itself at the helm of the Metaverse race, putting it in direct competition with some of the most prominent names in the industry, such as Meta Platforms Inc. – formerly Facebook – and Apple Inc.

With AR, users will be able to overlay different sensory elements from the real world to optimize their experience. At the same time, VR will strictly work on heightening the virtual aspect of the fictional realities in the metaverse.

Investopedia expressed that “as the metaverse grows, it will create online spaces where user interactions are more multidimensional than current technology supports. Instead of just viewing digital content, users in the metaverse will be able to immerse themselves in a space where the digital and physical worlds converge.”

The metaverse the Big Tech giants seek holds a much more symbolized meaning, though. The metaverse will be the space the tech industry built to bring a much deeper level of connectivity, laying the foundation of a digital way of living, working, shopping, and even socializing in a hypnotic virtual world where each person is to choose the reality they seek out, completely disconnecting them from the humanoid aspect of life.

And the video gaming industry presents itself as the ideal model of the metaverse. In theory, video games could take the player into a world where they have the absolute choice of being who they want to be through their avatars and behave how they want to act. Players indulge in a virtual world for hours non-stop, spending money on digital goods and whatnot.

Since the emergence of Metaverse, tech investors have shifted their attention to companies showing interest in the parallel digital world, with bets on metaverse-related technologies rising to new highs, as well as the rise of metaverse-themed exchange-traded funds that have been recently issued.

The Big Tech League is entering the field to welcome the metaverse soon and overlay digital shadows on reality, providing a much more comprehensive level of information and context.

Apple has already revealed plans to partake in the next monumental project for the tech giants, which played a critical role in the iOS developer’s rise to $3 trillion valuation before descending down to $2.99 trillion late last year.

And let’s not forget the then-labeled Facebook’s announcement of changing the company’s identity to represent its utopian vision of what an alternate reality would be, the “next generation of the internet” Meta’s CEO, Mark Zuckerberg, called it.

Still, in reality, the matter is that whoever controls the metaverse will obtain a much larger capital to usurp the rest of the Big Tech giants, therefore, disrupting the balance in the market, and imposing more monopolizing power over the industry.

That, is exactly what the tech legion giants are rummaging around for; to hold the reigns of the future of the tech industry, and whoever holds the keys to the Metaverse holds the key to the manifestation of the digital world.

So, by Meta and Apple pursuing the metaverse, and now Microsoft – and so early might I add – they are placing themselves in a position of power, in strife to become the new – and perhaps leading – tech giant amongst the five.

The video gaming industry is already presenting itself as a vital player in the metaverse race. Before the Covid-19 pandemic’s swift, the industry exceeded $100 billion globally. The framework, ecosystem, and infrastructure needed for the metaverse to thrive is already being structured in the gaming industry. While it is still in its primitive phase, it is, however, the first step that would lead to many more.

In Microsoft’s case, acquiring Activision Blizzard – other than being renowned as one of the leading gaming companies globally – the software developer now has the upper hand given it will pay less for the gaming titan’s acquisition, compared to what it was valued for last year.

Blizzard’s market devaluation in a matter of one year is mainly driven by The Wall Street Journal’s report around how Bobby Kotick, Activision’s CEO, knew about the allegations of sexual misconduct taking place at the video gamer maker’s premises. Following the report, the company’s shares dropped as much as 6 percent.

To the surface, Microsoft is welcoming to its realms a comprehensive community of dedicated gamers through Activision, but what does it truly mean for the tech giant’s plans alongside the metaverse? It’s hard to say, given that the ascend of the metaverse is still in its primary stages, with many factors need to be addressed before the whole project comes to concrete fruition.

Yet, one thing is certain in this scenario, Microsoft is placing itself in a rivalrous stance not only with Meta Platforms Inc. but a brigade of video games companies in the industry. While the deal awaits regulatory approval – which experts believe could take some time to clear out – if succeeded, the company “would obtain various online games with metaverse characteristics,” according to The Wall Street Journal.

For Microsoft to thrive in this situation, it will need the support of millions of dedicated gamers to help it leave a mark in the multiverse by creating a digital ecosystem for one specific community in the project. This places the gaming community as the leading driver of building the needed crowd to fulfill the success of the metaverse and, by default, the company’s success in building a better, more superior version of digital space.

Video gaming companies are already weaponized with the needed tools to build the parallel world. The tools required to direct technology in a particular path, such as graphics, cloud computing, artificial intelligence (AI), and virtual marketplaces. Once these tools are invested in the right places and with the right product, Microsoft will have Activision’s intelligence to build the groundwork for its version of the metaverse.

Even as Big Tech companies place their mightiest efforts in the race of the Metaverse, one thing needs to be taken into consideration, the giants of the tech industry have not reached the eminence they desire as the most valuable titan based on one ground-breaking product. Until the metaverse concept emerged to the scene as a technological contribution on a global scale.