Why do so Many NFT Projects Fail? 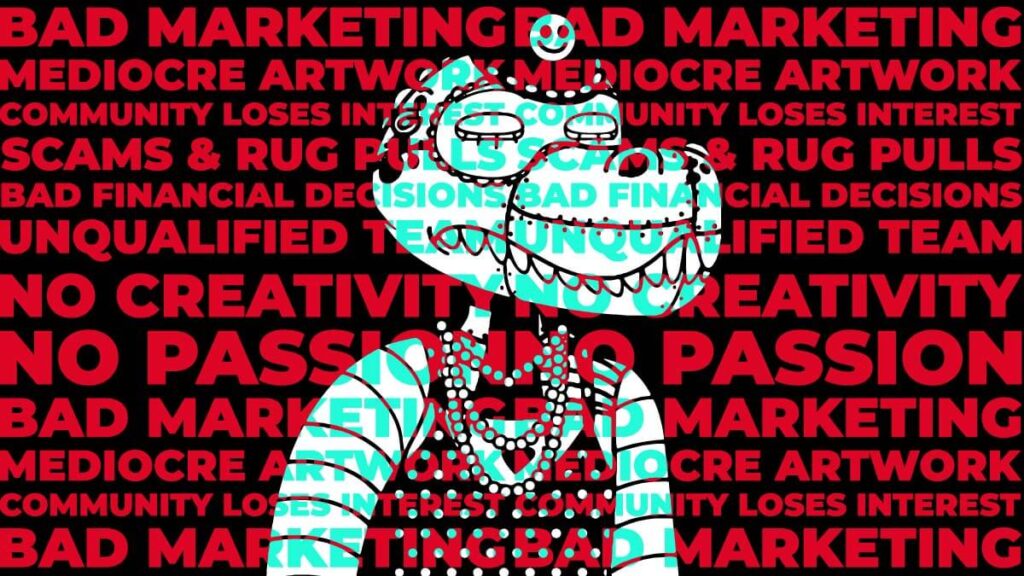 Almost one if every 100 starups usually fail to take off. NFT projects are no different, except that number actually jumps up concerningly. For every Bored Ape or Crypto Punk there are hundreds of failed NFT projects that never saw the light of day or fizzled out into obscurity. What are the common denominators that make NFT projects fail?

One reason an NFT project might fail is that it was made to.

The sudden rise in popularity of NFTs along with the elusive nature of the whole ecosystem meant that many could get away with making some quick cash by selling a hyped-up roadmap, influencer interest, and all kinds of ambitious promises, and then pulling the rug from under investors after they put in their money.

Avoiding rug pulls can be a challenge even to veterans of the space, but people are getting better at spotting red flags.

Failing to plan is planning to fail. Starting a project without a solid financial plan is setting yourself up for failure down the line. Every phase of the project should be budgetted properly with the worst case scenario cindered at everything step.

Running out of fuel halfway through launch could  halt your efforts, and end you up with a failed NFT project.

If your project is just another copy-paste of another generic ape nft with air drops, merch, exclusive entry to a community of this that and the other, you might need to spice things up.

Figure out what you and your team are uniquely qualified to offer, and dive into it. Whatver it is that makes you stand out as a project amid the other thousands of mediocre and failed NFT projects, do that.

Its a young and evolving field, with plenty of room for innovation.

Most NFT developers are in it for the money, it is the main motivator, and understandably so. but if the the dev team is treating their project like a dead-end job, it will reflect on your marketing, your discord servers, and your tweets.

If creators don’t treat their project as their baby then most likely it will contribute to their failure.

NFT projects that failed to take off usually had a badly thought out and poorly implemented marketing strategy.

No matter how good your project is, it won’t take of if nobody hears about it, and if you don’t catch their attention when they do.

Influencers, paid ads, a well crafted brand, an active social media and an involved community can all contribute to a successful marketing strategy. Banking on one of these alone is a big reason that many NFT projects fail.

It is true that many NFT projects are less about art as they are about the utilities behind the token.

But, without art that catches attention, wows the audience, and shows the skill and capabilities of your project, you won’t go far. Not many will believe in your project if it is veiled behind ugly and half-done artwork.

A good team of competent and dedicated experts is pretty much half the battle won.

A poorly organised team with poor synchronicity is a big factor behind why many NFT projects fail from the get go.

With the right people, professionals in therj fields and able to work as a team, you can expect you project to fly with much fewer setbacks and hassles.

Your community is your backbone in the NFT space.

Maintaining an engaged and vibrant community of supporters is perhaps the number-one most defining factor behind the success of a project.

Rewarding your loyal followers with privileges and white listings, organizing activities that provide some kind of fun or value, that is the way to go in the NFT space.

Any and all of the factors are pillars of a good NFT project. You need to grasp at least most of these if you are to stand out among the sea of ambitious projects attempting to ride the wave of this new technology.

It is no easy task to head an NFT project, and in most cases, it is an uphill battle to stand out and survive past launch.

NFT projects fail due to a lack of planning, bad decision making, an unprofessional team, and a lack of passion, all can crash an otherwise promising NFT project.