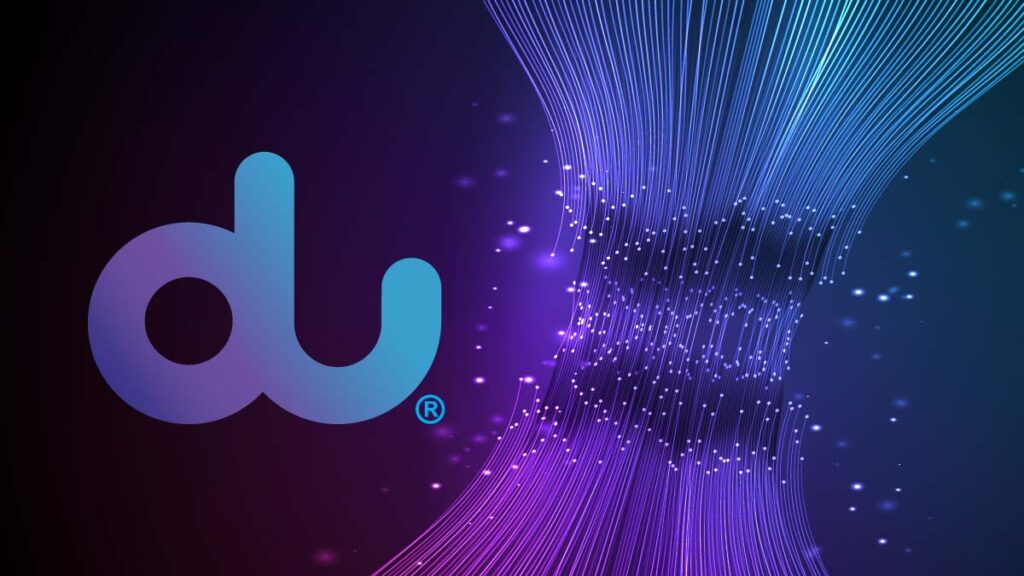 Du mobile telecommunications service, owned by the Emirates Integrated Telecommunications Company (EITC), was established in 2007 as the second operator in the United Arab Emirates (UAE), aiming at contesting the hegemony of Etisalat, the undisputable leader in the telecom sector in the UAE and other foreign markets. Du offers mobile and fixed telephony, broadband connectivity, and IPTV services to various customers, from individuals to enterprises.

Although the telecom sector in the UAE is one of the healthiest sectors in the country and among the most advanced worldwide, the competition between the two major operators is quite paradoxical as both of them are financed chiefly by governmental institutions or affiliates. The sector is also regulated by the Telecommunications and Digital Government Regulatory Authority (TDRA) which monitors the operators’ performance, ensuring proper ‘regulated’ competitiveness among them. Furthermore, the territory is geographically divided among the operators. The telecom landscape can therefore be assimilated into a veiled duopoly.

In 2017, the EITC launched Virgin Mobile, an MVNO-like entity fully managed by Du. The latest child provides an app-based mobile service that allows extreme customization options, a fully digital experience, and a potential in-house competition with its older sibling, Du. The diversification of the portfolio through Du and Virgin Mobile’s offerings mainly targets the hegemony of Etisalat or e& given the new identity of the leading operator.

Du has been slowly recovering from previous financial slumps, mainly during the COVID-19 pandemic.

The year-over-year 2020 financial results were indeed bleak, although an improvement trend was observed in the last two quarters of the year. Aside from fixed subscriptions, the numbers were red primarily in revenues and mobile subscriptions. The same period was governed by increased capital expenditures to continue the necessary network upgrade plans in terms of deployment and maintenance. The minimal improvements throughout 2020 concretized in 2021. Although profits dropped by 340 million Dirhams compared to 2020, revenues increased by 5.4 percent in comparison, indicating a potential recovery path.

5G Drive… at all Costs

Du has been relying heavily on its 5G network, with constant investments flowing in to perform the necessary upgrades and provide better services that will allow it to rival other operators. For the 2021 year alone, 2.6 billion Dirhams were expended on the network itself.

Du was among the first fleet of operators to deploy 5G in 2019. The initial deployment for both operators was in the 3.5 GHz band, both providing fixed wireless access and mobile 5G connectivity. Etisalat has decided to focus more on non-standalone (NSA) 5G access building on its mature 4G network and use the standalone (SA) mode in trials and eventual target applications in the future.

Du has been more aggressive in its 5G plans. Following the allocation of spectrum in the 24-27 GHz band by the TDRA to local operators, Du has trialed the new band by switching on a site in Yas Island. The 5G standalone access plans were released earlier in January as Du announced the launch of 5G SA private network solutions for enterprises using Intel’s radio access network products. Etisalat eventually followed suit at the end of last month by announcing a partnership with Nokia to launch private 5G networks.

The ongoing cat and mouse game in the 5G race has been highlighted in the OpenSignal 5G experience report released in September 2021, with Du leading in terms of download speed and 5G availability. Etisalat topped the list in the 5G game and voice app experience, as well as the upload speed. Both operators, however, tied in the video experience segment.

Du’s involvement in internal projects related to digital transformation has been extensive. Building on its advanced 5G infrastructure, the operator has forged several partnerships to deliver its customers security and cloud computing solutions. To protect its network, Du streamlined its security operations by using ArcSight’s SIEM solution. This will enable automation of the security and compliance monitoring processes cost-effectively.

Security has also been a key point in Du’s memorandum of understanding (MoU) with the security industry regulatory agency (SIRA), which aims to enhance safety and security services in line with UAE’s vision. As the case with Etisalat, Du invested in data centers and cloud computing solutions. Two data centers at Khalifa Industrial Zone Abu Dhabi (KIZAD) and the Dubai Silicon Oasis (DSO) were opened to support secure digital transformation endeavors. This move was consolidated by an agreement with Huawei at the mobile world congress (MWC 2022) to develop multi-access cloud solutions that will allow faster decision-making and boost the security of the offered services. The operational model’s improvement goes through a renewed partnership with Atos to create a more agile workflow.

These enhancements will enable the operator to contribute to the digitalization of various sectors, including manufacturing, transport, shipping, aviation, energy, and health across the UAE.

Du recently announced its support for the digital Dubai energy and water authority (DEWA) and InfraX in their projects to digitalize energy provision, mainly using artificial intelligence (AI). Another joint project with Ericsson and Pure Harvest Smart Farms aims at developing 5G-based smart farming solutions. Together with Royal Philips, Du has committed to a data-driven digital healthcare transformation in the UAE. It has also offered its expertise to retail brand aswwaq in implementing a software-defined wireless access network (SD-WAN) to link the company’s key sites in the Emirates.

Governmental services and defense were also on Du’s plans. 5G-based solutions to empower government entities were presented at GITEX 2021, while a recent MoU with EDGE Group offers the use of Du telecom services to facilitate the group activities in developing defense solutions.

Who is Winning the Game?

The competition in the UAE is quite analogous to a leader-follower game. Du’s initial plan of action when it was launched was based on the strategy of the sole leader, Etisalat. Back then, the main target was to build a robust network that would enable the new operator to offer competing services and attract additional subscribers. However, the new operator hasn’t assumed a follower status the whole time.

As mentioned earlier, Du’s commitment to the community seems to exceed its competitor, which was evident in its community-related partnerships. The Virgin mobile model was another cunning strategy by the EITC to disrupt the telecom market with a unique system that will significantly increase its customer base, thus pushing Etisalat for once to follow suit rather than lead.

Therefore, the competition is similar to a tug of war game where each operator is trying to catch up in areas where the competitor is actually excelling. In all cases, the main driving force for the two operators’ decisions is the country’s vision.

On the international level, Etisalat has monopolized UAE’s presence in external markets. This, in a sense, justifies e& top position in the GCC in terms of its assets, according to Forbes, while Du was missing from the rankings. This also highlights the difference in philosophy between the two operators. While E& as a brand is trying to diversify its portfolio inside and outside the Emirates, Du’s strategy is rather to strengthen its presence in the Emirates and perfect the quality of its 5G services to individuals, homes, and enterprises.

Du is a relatively new operator in the UAE, which intruded into a market long monopolized by Etisalat. To survive the fierce competition, the new service provider has focused on two main areas: winning the 5G race by ensuring a robust and reliable network and excelling in digital transformation while extending its influence to various vital sectors in the Emirates.

The rivalry between the two operators will certainly not subside soon, which is exceptionally healthy for achieving the projected visionary goals. Less regulatory constraints would eventually help in this direction as well.

“Inside Telecom provides you with an extensive list of content covering all aspects of the tech industry. Keep an eye on our Telecoms and 5G space to stay informed and up-to-date with our daily articles.”