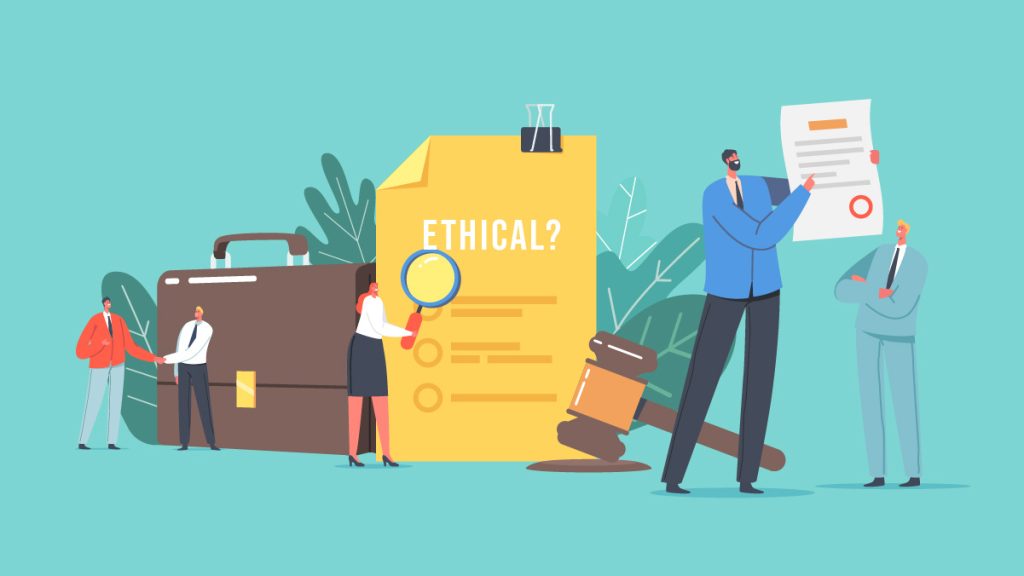 Companies invest decades in improving their reputation and uphold ethical practices. A single scandal or a corrupt corporate culture, however, might permanently harm the company’s reputation. In other cases a company might strive to build a certain brand but in the background could be deeply involved in unethical practices.

In this article we are going to focus more on the companies that you might not have thought of as unethical either because they are great at staying under the radar or do not interact so directly with consumers that the common person would not be immediately familiar with.

Companies with Less than Ethical Inklings

Palantir gathers and analyzes data for governmental organizations, hedge funds, and pharma giants—data, you might not be surprised to learn, that is not always used for good. Palantir was co-founded by Peter Thiel, the Gawker-killing, Trump-promoting cyber-libertarian boogeyman. Its name is taken from a corrupted spying device from Lord of the Rings.

In 2018, Google terminated its Project Maven agreement with the United States government after employees complained that the artificial intelligence program would help the Pentagon better target drone strikes.

Palantir happily stepped in their place, with their CEO emphasizing his delight to be working with the US government. Where your stance is on that is up to you.

Ethics wouldn’t really come to mind as an issue for this company. Uber focuses its lobbying efforts on significant legislative threats like California’s gig economy law AB5, but a less publicized battle with policymakers in the Golden State shows how reluctant Uber is to cede any control to local authorities and how a company that once used a “God View” tool to spy on journalists often poses as a privacy champion when it suits them. In order to help transportation planners better understand how all those Birds and Limes are moving around the city, Los Angeles has been gathering comprehensive, anonymized data on electric scooter travels in the city since the summer of 2018. L.A. now wants to use ride-hailing data in a similar manner.

Uber has contributed its voice to the chorus of privacy advocates who have expressed legitimate worries about the collecting of all that rider data, but these issues are not grounds for disqualification.

The company’s ethical problems that arise are two-fold.

Even when cities requested much less specific data, Uber has already raised concerns about potential privacy issues because it doesn’t seem to appreciate disclosing any information that might be viewed as a trade secret or that might allow for greater supervision.

Additionally, it is over Los Angeles’ head to ask California and other states to forbid cities from collecting certain types of rider data—a strategy similar to the one Uber used to pressure legislatures across the nation to stifle local rules.

A $4 billion face recognition-focused deep learning AI business that will soon float on the Hong Kong stock exchange was blacklisted by the Trump administration in October over allegations that it helped Chinese authorities repress Uighurs in Xinjiang. Ride-sharing apps, payment systems, retail outlets, photo-editing software, office security infrastructure, and public transit all use Megvii’s technology as an ID verification function. Face++’s widespread use in the nation has aided in acclimating the populace to an authoritarian technology used for convenience.

Face++ has been used by the Chinese government to locate criminals as part of its SkyNet system, which employs 170 million security cameras and once found a BBC reporter in seven minutes.

This might not come as a surprise for a list of questionably ethical companies. The Chinese multinational is the world’s second-largest vendor of smart speakers and search engines.

The 2019 pro-democracy protests appear to have been actively repressed by Baidu, which dominates two-thirds of China’s online search market. Given the control that the Chinese Communist party exerts on businesses in the country, their involvement in such practices is no surprise.

A forensics business with an Israeli base that accesses users’ personal gadgets (unlocking a phone costs $1,500) on behalf of its customers, who are frequently law enforcement or other governmental bodies.

Authorities in Myanmar detained two Reuters reporters who were investigating the murder of Rohingya Muslims in 2017. Cellebrite’s technology was reportedly utilized by a police officer who had received training from the company to hack into the journalists’ phones. The materials the officer discovered were later used as evidence by the government in the trial of the reporters, who received a seven-year prison term.

Cellebrite ceased doing business in Myanmar in 2018 but declined to comment on the issue. In 2019, the reporters were freed.

Any company that holds so much of our data in their hands must be ethically accountable. Cloudflare is a provider of internet infrastructure that supports websites’ content delivery and security. Any website cannot survive without Cloudflare’s services for stopping automated DDoS attacks; the New York Times referred to CEO Matthew Prince as one of several internet CEOs with influence over the web’s most fundamental infrastructure.

The owner of three websites with more than 18,000 pornographic photographs of minors used Cloudflare’s cyberattack prevention services to hide their internet addresses and evade discovery, according to a late December New York Times story. Although Cloudflare asserts that it has already severed ties with these and similar websites, Canadian NGOs fighting child sex abuse have said that the business was sluggish to act even after being informed (the company responded at the time that it worked closely with the nonprofits and law enforcement to remove several websites). With a few prominent outliers like 8chan, Cloudflare has typically declined to take ownership of the websites it guards, which include message boards with violent and abusive content.

LiveRamp, one of the most formidable consumer data brokers, gathers personal data from hundreds of millions of people, including property prices, credit card transactions, and health histories, in order to support the $100 billion internet advertising market.

In 2018, the disgraced political consulting firm Cambridge Analytica defended itself against claims that it had improperly obtained Facebook user information to aid Donald Trump’s 2016 campaign by asserting that the information had proven to be useless and that it had actually constructed its voter-targeting operation using datasets acquired from Acxiom and other data brokers, not from Facebook. In other words, even if the Cambridge Analytica issue was concerning, the kind of private data collection that got the company into trouble was almost insignificant in comparison to what businesses like Acxiom do on a daily basis to target advertisements at customers.

One of the biggest companies offering genetic testing to consumers, 23andMe has aided millions of people in learning about previously unknown branches of their family trees. Additionally, the service has built DNA databases that, when used to identify large segments of the population, can also assist law enforcement. Similar databases have helped law enforcement apprehend alleged serial killers. Although 23andMe has rejected law enforcement’s requests for access to its consumer data, which is quite an ethical move for the company, the courts may eventually order the firm to do so. Given the scope of 23andMe, even those who have not subscribed to the service would be giving up their genetic privacy in such a case.

The problems arises whenin the words of the CEO Anne Wojcicki,

Regarding worries about DNA privacy, CEO Anne Wojcicki stated at the Time 100 Health Summit in October that “The reality is that, with a new technology, it just takes time for people to become comfortable with it.” Because it emphasized the progressive social acceptance of genetic ancestry that privacy activists have been warning about, the statement garnered attention.

Oracle, a provider of database and cloud computing services, currently holds 3.9 percent of the global market for business cloud software.

Following Oracle’s acquisition of the Java programming language in 2010, Google was sued for violating copyrights. To enable developers to create Java apps that would work with the Android operating system, Google previously rewrote Java APIs, which are lines of code that permit various programs to connect with one another. It might be more challenging to create cutting-edge software that works across several platforms if the Supreme Court upholds Oracle’s assertion that it owns the rights to the Java APIs.

Palmer Luckey, then 24 years old, founded the AI defense company Anduril, named for a mystical sword in the Lord of the Rings, and staffed with former Palantir executives, after selling his virtual reality startup Oculus to Facebook and leaving the social media giant under hazy circumstances (allegedly because of donations to a pro-Trump group).

The immigrants’ rights organization Mijente claims that Anduril is making millions of dollars by assisting the Trump administration in building a virtual border wall of solar-powered surveillance towers with A.I.-enabled sensors and cameras. Their concerns are that technology can be used as part of “a surveillance apparatus where algorithms are trained to implement racist and xenophobic policies.” This puts the company amidst a sensitive ethical dilemma.

MSpy is a provider of phone-spying software that enables users to track the calls, messages, locations, social media, and other online activities of another individual. The product, which is marketed to parents, is essentially the best tool for cyberstalking.

While some might appreciate the apps usefulness, there is no denying the ethical implications behind the existence of a spy app that is a click away from infringing on your right to privacy.

It is often not the technology itself that is evil, but the hands that wields it. However, some companies are flying just above the line of acceptable practices to be concerning for all parties involved. It only takes some incentive to be pushed over the edge, and turn from a useful technology to a tool of oppression.