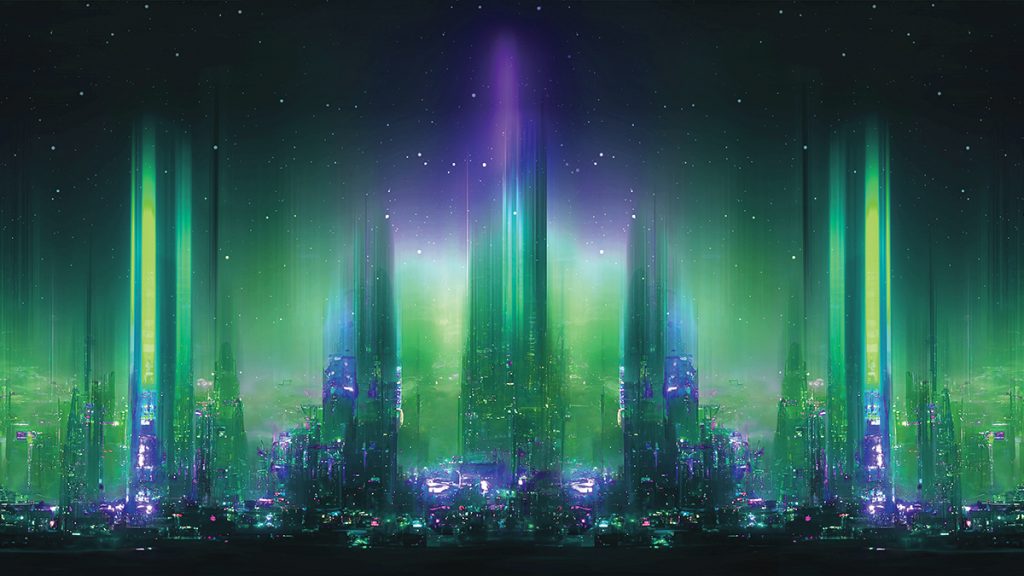 As the world enters a new era, a climate-focused one, technology has proven to be one of the more critical aspects contributing to the fight against climate change with the rise of worldwide sustainable visions. Digital innovations have become, what could be considered, the backbone of every sustainability strategy in the world, and the MENA region is currently diverting its attention toward sustainable solutions. A decision and shift in actions led to what is now known as conscious digital transformation. With it came the new reign, crowned by innovative metropolises.

The Middle East and North Africa (MENA) region, specifically the Gulf Cooperation Council (GCC), is increasing its adoption of sustainable solutions in answer to the global call in the fight against climate change. The integration between the development of smart cities and technological innovations can bring forth opportunities that would deliver climate actions and economic growth. Almost a decade ago, the world’s view of sustainability was relatively shallow, especially for an oil-based region, such as the MENA. Yet, the region’s combination of economic, technological, and innovative city projects has presented a more responsible view of global warming.

A Glimpse of the Future

Abu Dhabi and Dubai were the first two cities in the UAE to start developing the suited technological infrastructure to create the proper foundation to establish the fulfillment of their smart cities’ projects and sustainable visions. As per the Smart City Index, both Abu Dhabi and Dubai have been ranked as the most intelligent cities in the MENA region. This has allowed the UAE to have the upper hand in terms of achieving and fulfilling the first phases of creating an eco-conscious future.

Out of 118 cities, Abu Dhabi has ranked in the 28th position, while Dubai is ranked in the 29th position. Abu Dhabi’s Economic Vision 2030 has the potential to alter the country’s point of focus. Shifting from an oil-based country to a knowledge-based one, extracting its resources from the accelerated adoption of innovative solutions. The Economic Strategy has the potential to help Abu Dhabi’s government and its sector, guaranteeing diversification of the economy by locating several economical alternatives, and one of those economic alternatives is Smart Cities.

The Economic Vision 2030 has successfully put Abu Dhabi on the radar as one of the leading cities implementing the sustainable solution. While the MENA region is indeed increasing its adoption of eco-conscious solutions, Abu Dhabi, however, is not the only city tilting in that direction. The city that has accelerated the definition of digital transformation, Dubai, has also managed to direct itself in that direction.

Dubai Plan 2021 is pointed at altering the cities’ core infrastructure into a digital one. The purpose of the strategy is simple. Make Dubai smart and make it self-reliant through a scheme focusing on six main pillars: economic services, infrastructure, transportation, urban planning communications, and finally, electricity.

Through this, Dubai will be transformed in a revolutionizing manner by providing comprehensive services to its customer base in a much more simplified approach all while increasing efficiency. Some projects in the strategy involve education, transport, communications, public utilities, and energy services. While these offer wide bundles of services for consumers and, in return to the government, smart economies are deemed a fundamental player in the implementation and success of the strategy. A smart economy deals with the development of smart companies, port services, smart stock exchanges, and smart jobs.

By simply giving the right support to all these intelligent sub-strategies developed that ensure economic growth, the whole result will be an overall transformation that purely relies on an intelligent approach to bring forth in the future an inclusive, sustainable economy.

Dubai’s approach collectively relies on the establishment of various Smart Cities. A move that has massively increased Dubai’s attraction from outside visitors. The emergence of sustainable cities, such as The Sustainable City, Dubai Silicon Oasis, Dubai South District, Desert Rose City, and Sharjah Sustainable City. Dubai’s and Abu Dhabi’s green movements will help them strive in varying ways to boost and fortify their economic power in the region. The bold, yet foreseeable move, of shifting toward a knowledge-based economy, and decreasing the Emirate’s reliance on oil, has placed the UAE at the forefront of the race for a green economic framework for sustainable development.

The Green Economy Vision would present the Emirate as the globally renowned digital hub at the heart of the cradle of civilization. A new green economy will emerge to further the region’s competitive advantage through environmental preservation for the upcoming decades and maybe centuries. Such visions not only have a significant role to play in fostering the region’s economic power, but the climate as it has always been the principal goal. Through these economic incentives, the goals could be achieved closer.

As the world makes the shift towards more environmentally conscious approaches, the UAE is fixating its attention on becoming a globally renowned digital hub in the region and potentially on a global scale.

The world is finally acknowledging the criticality of environmental pollution. A global fellowship has been assembled to restructure its economic, industrial, and societal framework to decrease its carbon footprint. This lead-by-example approach has fueled a chain of environmental strategies where governments cultivated technologies to reduce pollution and support economic growth.

The Kingdom of Saudi Arabia (KSA) never shied from displaying its strength and stance toward sustainability. Saudi Arabia has always been at the front lines of achieving its policy development goals through eco-friendly solutions. The KSA is addressing today’s most rigorous environmental challenges. With this mindset came a creative approach to decreasing the Kingdom’s carbon footprint and bringing it closer to achieving its net-zero targets. The wildly ambitious plan of KSA’s Vision 2030 could potentially shape the Kingdom in a way the world has never witnessed before.

The Kingdom is investing its power in a new kind of oil, a new kind of resources, digital ones. This adoption will also place the KSA on the map of knowledge-based economies, by shifting its economic focus to its private and public sectors. The goal of making Saudi Arabia’s economic agenda solely reliant on technological solutions, and sustainable ones are deemed one of the most vital branches of Vision 2030. The Kingdom’s latest project is expected to reach higher goals than its predecessors in terms of zero-carbon innovative community-based economies. The design model is perfectly developed in a way to ensure touristic attraction, be it ecotourism or medical tourism. A sustainable village will be furnished with the most advanced urban technology to help support the main pillars of the ideal societal framework. Sustainable digital solutions will be significant in delivering food, energy, transportation, waste, mobility, and building materials.