Pros and Cons of Blockchain Technology: A Thorough Dive 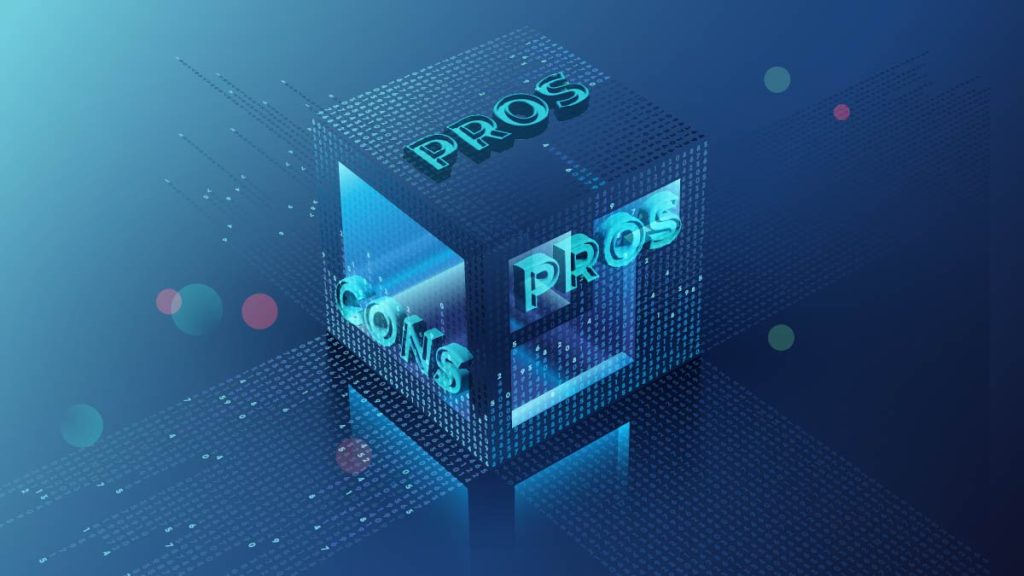 Live blockchains are growing daily at an ever-growing pace. As of our present day, there are more than 10 000 active Blockchain-based cryptocurrencies. With such a presence, having the right knowledge base has never been more valuable as this decentralized technology becomes more and more embedded into global establishments. So, what are the pros and cons of blockchain technology?

In its most simplified form, a blockchain is a shared database or ledger. Articles of data are collected in data structures referred to as blocks, and each network branch has an identical replica of the whole database. Blockchain provides a high level of security since if someone attempts to alter or delete an entry in a block, the majority will not reflect this alteration; resulting in its rejection. Technology as advanced as this, naturally, will have a vast list of advantages and disadvantages, making it both reliable and risky, lets take a look at the pros and cons of blockchain technology.

What Are the Pros of Blockchain?

Blockchain took the world by storm and revolutionized the finance sectors and how most people handle their financial operations.

Transactions made on the blockchain are approved by a collaborative network of thousands of computers. Almost negating all human involvement in the verification process will result in less human error. On a rare occasion, a computer on the network was to make a mistake. The error will only affect one copy of the blockchain. So, for a mistake to be spread to the whole blockchain, more than half of the network computers – almost 51 percent – will have to make the same mistake which is almost impossible.

Clients pay their bank to verify a transaction. Blockchain erases the need for third-party verification and all the costs that come with it. For example, business owners add a small fee whenever they collect their payments using credit cards since banks, and payment processing companies need to process those transactions. Bitcoin and most blockchain crypto charge minimal transaction fees.

Blockchain doesn’t keep any of its data in a central location. Instead, it is spread across a network of computers. Whenever a block is added, each computer on the web is updated to reflect the change. This process makes the data harder to manipulate. If a copy of the blockchain falls into the hands of a malicious hacker, one copy will be contaminated and not the entire network.

Transactions made via central authority may take up to a few days to complete. If you deposit a check on Friday afternoon, you’ll have to wait till Monday morning for the funds to land in your account. Most banks operate within a schedule and have days off. The blockchain is working 24/7.

The desired transaction can take as little as 10 minutes and will be considered secure after a few hours. This is crucial for international businesses since it’ll solve the time zone issues and make payments easier to track.

Most blockchain networks operate as public databases. Anyone on the internet can see a list of the network’s transaction history. They can’t access any identifying information about users making transactions. A common misconception is that blockchain networks such as bitcoin are anonymous. They are, in fact, only confidential. When a public transaction by a user is initiated, their unique code, also known as the public key, is recorded on the blockchain, but their private information is not. A transaction will not reveal personal data, even when linked to a person’s name.

Once there is a transaction record, its originality needs to be validated by the blockchain network. Thousands of computers rush to confirm the viability of the details. Then it adds said details to a block. Each block contains its hash and the hash of the block that precedes it. When the data on a block is edited, it changes the block hash code, but it won’t change the code on the block after it. This characteristic makes it extremely difficult for data to be messed with without evidently noticeable aftermath.

A high percentage of blockchains is entirely open-source software. This means that everyone can view its code. This gives auditors the complete freedom to review cryptocurrencies for security. It also means there is no apparent authority on who controls the currency code or how it is edited. This allows anyone to suggest changes or tweaks for the system. If most users approve of the said tweaks, they’ll be supported and updated.

Perhaps the most touching aspect of blockchain when talking about the pros and cons of blockchain technology is its inclusivity. Anyone can use it regardless of ethnicity, gender, or cultural background. Almost 1.7 billion adults do not have access to banking services, or even a bank account or any financial accounts for various reasons. This can be attributed to the fact that they earn so little, leading to some banks often overlooking them. Here, in this case, Blockchain will play a much more fundamental role by allowing the banking of the unbanked.

What Are the Cons of Blockchain?

Just because something solves many issues we previously faced, it doesn’t mean it won’t have downsides.

Bitcoin presents itself as a great example to study. Bitcoin’s system needs 10 minutes to add a block to its chain. At this rate, it can perform seven transactions per second, a humble number compared to a legacy brand like a visa card that can complete 65 000 transactions per second (TPs). The solutions have been in the works for years, and currently, some blockchains can hold up to 35 000 TPs.

Another issue is that a block hand holds a limited amount of data, so its size has been a debatable aspect since its dawn.

Users are saving money on transfer fees and such extra expenses, but the technology is far from cheap. The verification system that blockchain implements requires considerable computing power that can prove awfully expensive to provide. The cost to mine cryptos is high, raising electricity bills, maintenance fees, and miners’ compensation fees. Operating on such a high number will leave a huge electric footprint. The mining process doesn’t only need a massive number of devices, but cooling such devices can prove very costly, not only for users but also for the environment. Solutions such as solar power supply, are not late to consider to halt this drawback.

Concerns have been expressed about governmental regulations over cryptocurrencies running on blockchain technology. While crypto is not a fluke, and let’s face it, it is here to stay, governments can make owning them illegal. But it seems like these concerns are beginning to fade away since big names are starting to embrace crypto use.

While confidentiality of the users can protect them, it can allow unlawful trading practices.

The most significant example is the silk road, a dark web of illegal drug and money laundering operation active between 2011 and 2013 that the FBI shut down. The dark web allows the untraceable trading of currencies and unlawful purchases. Currently, US regulations require a background check when opening an account. Some can argue that this flexibility is a pro and a con at the same time. Most shady practices happen using small coins and can be done through untraceable cash in real life, making this an already existing issue, not an issue presented by the blockchain itself.

After looking at the pros and cons of blockchain technology, we can know that it is only going to keep growing in fame and mainly thanks to names like Bitcoin and Ethereum. The coin that is always talked about by almost every business figure. As we venture into the third generation of blockchain, it is no longer a matter of if legacy companies will catch on to the technology. It’s a matter of when.