Published 4 Months Ago on Wednesday, Aug 03 2022
By Adnan Kayyali 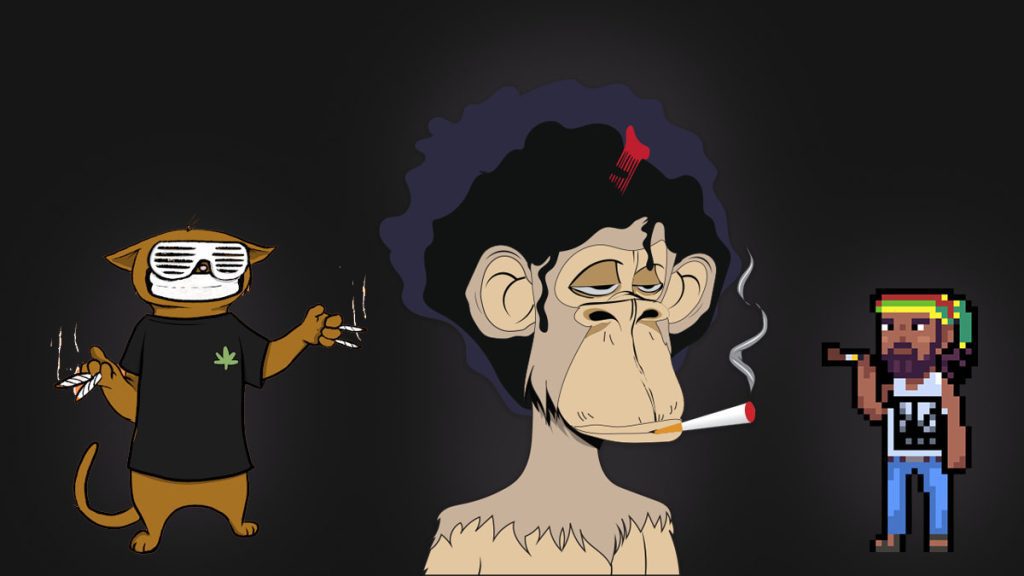 The medically recreational drug industry and Non-Fungible Tokens (NFTs) are seemingly a match made in heaven. Whether you view that as a good thing or not is up to you, but it is a massive component of the NFT drugs coexistence. Despite the controversy, the bond between the two is used to further well-intentioned causes, if properly considered.

Weed NFT Projects and the World of Cannabis

In the last five years, the two sectors of cannabis and NFTs have grown tremendously. The Cannabis Global Report estimated $37.4 billion in revenues worldwide for the legal cannabis market in 2021. The NFT sector made $5.4 billion in profit in the same year, according to CNBC. These figures demonstrate that both of these industries are prospering and offering fresh business models.

NFTs can have significant benefits for the cannabis industry. For instance, providing a mechanism to register harvests so that there is a time-stamped, unalterable digital record demonstrating who first developed a certain strain.

There are a great number of weed NFT art, utility based, and NFT drugs related projects. Most highlight the connections between these digital tokens and cannabis and how they may support one another’s expansion. Here, we will mention a few of them.

420 PotPunks, purchased through the OpenSea market where five percent of the money made goes to the Weldon Project. The project provides financial assistance to imprisoned cannabis offenders.

10,000 hand-drawn NFTs make up the collection Blazed Cats. They are fuzzy pals with a wide range of characteristics. They all depict a particular type of cannabis user and share the trait of possessing cannabis paraphernalia. Ten percent of each sale of a Blazed Cat is donated to Mental Health America (MHA), a nonprofit organization devoted to meeting the needs of people with mental health conditions.

Leading cannabis breeders, growers, and entrepreneurs established the Weed Gang NFT. They want to spread their passion for the cannabis business by depicting cannabis strains in their NFTs. Their NFTs’ artwork depicts information unique to each strain, such as its name, CBD and THC content, and its distinctive color.

In the world of NFT drugs coinciding, it was just a matter of time until psychedelics entered the scene in storm. Given the good reputation that psychedelic drugs have been picking up over the years with regards to mental health benefits and therapeutic potential. Also, they’re fun and we are all aware of how much NFT collectors love that.

Psychedelics Anonymous is one of the newer psychedelic-themed projects and by far is the most well-known. Lewis “Voltura” Gale, the company’s creator, is a brash, no-nonsense marketer headquartered in Sydney, Australia. Gale started out as an NFT collector, most notably being involved with the Board Ape Yacht Club early on.

Gale’s own issues with mental health had a significant role in his attraction to psychedelics. Gale’s team developed the idea of a hidden society of featureless, mannequin-like humanoids, inspired by positive testimonials of his friends who had used psilocybin therapeutically.

According to the project’s Open Sea website, these humanoids make up the first 9,595 photos in Psychedelics Anonymous’ Genesis Collection. Its ownership “awards holds the highest degrees of PA membership.” A narrative that Gale has divulged on the project’s Twitter account and Discord. It is hinted at by the PA motto, “We are the darkness,” and a mysterious prose-poem on the project website.

Gale wants to utilize PA as a way to aid businesses in the burgeoning industry of psychedelic-assisted treatment, riding the NFT drugs wave to do so. The PA OpenSea page states that they are more than a collection of NFTs. By promoting improvements in mental health, they are utilizing nature’s transforming potential.

Twitter and Instagram reportedly took action against a Colombian man in 2021 after he allegedly tried to sell a ton of cocaine online. Yet, this cocaine does not get you high.

A Medellin-based artist named Camilo Restrepo had produced “a ton” of what he called “crypto cocaine”—a collection of 1,000 NFTs bearing the picture of one kilogram of the powdered substance on each.

The 1,000 identical JPEGs of NFT drugs sold as part of the initiative, dubbed a ToN oF coke, are what Restrepo himself called “a dull picture.” Each is just a white rectangle in three dimensions on a gray backdrop. To the point where the costliest NFT is estimated to be equivalent to the price Restrepo believes a kilo of cocaine sells for, in Colombia. Each NFT in the series is, however, more expensive than the one before it. Similar photos stand in for the uniform packaging of cocaine produced across the nation for many years.

Restrepo, 48, grew up in Medellin when Pablo Escobar and other well-known Colombian cocaine smugglers were at their peak. Since then, the brutality surrounding the drug trade has served as a major inspiration for most of his artistic creations.

On top of that, it sparked a spirited discussion on the war on drugs in the internet comment sections, which Restrepo saw as a triumph for his initiative.

It was bound to happen. The wacky world of both recreational and medical drugs would meet the wild west of NFTs at some point. The NFT scene took all the energy and fascination with the world of drugs and redirected it inward. Its own inspired projects that brought benefit to their holders and championed good-hearted causes.