Non Fungible Tolkien: The New Lord of The Rings NFT 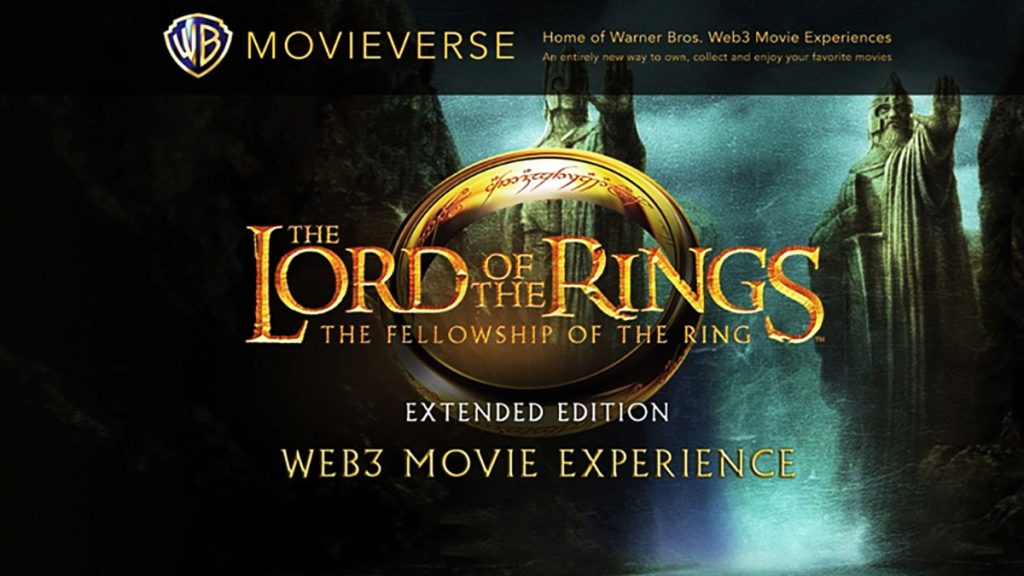 Warner Bros. Home Entertainment has announced the launch of a Lord of the Rings NFT, nicknamed Non Fungible Tolkien by the public. The Lord of the Rings trilogy is a three-part epic fantasy adventure film series. Peter Jackson, the director of LOTR, based these masterpieces on the book series of the same name written by J. R. R. Tolkien in 1954. They left one of the most significant impacts on mainstream media, such as “my precious” in Gollum’s voice. The first installment, The Lord of the Rings: The Fellowship of the Ring, alone brought Warner Bros. around a hefty 897 million USD compared to its budget of 93 million USD.

Before Going Down the Rabbit Hole

Before going down this rabbit hole, there are key concepts to discuss.

Web3 denotes the third generation of the evolution of web technologies. This evolution started from an abstract concept of building a fairer, more transparent internet. It is often associated with blockchain technology (a decentralized ledger that keeps records of digital ownership of digital assets). It pushes towards a token-based economy. This generation of evolution is still under construction, so its details are not yet precise.

NFTs are tokens generally created using similar programming to cryptocurrency. Their unique cryptography differentiates them from regular cryptocurrencies. The creators link the cryptographic assets to digital (and sometimes physical) content providing proof of ownership through smart contracts (blockchain-based contracts expressed as a segment of code designed to carry out a group of instructions). No two NFTs are identical; therefore, owners cannot swap for one another, unlike Banknotes or Bitcoin. Banknotes and Bitcoin are essentially fungible as you can trade 1 Bank note or Bitcoin with another of the same value and exchange smaller divisions (e.g., 1 cent). Hate them or love them; NFT is an ingenious concept.

Blockchain is a system that records transactions made with cryptocurrencies and maintains those records across several computers as long as they are linked in a peer-to-peer network. The system’s recording of the information makes changing, hacking, and cheating the system almost impossible.

Content Blockchain aims to create a decentralized, global digital infrastructure for the creative community. It allows the users to discover, register, navigate, offer, sell and license digital media content and exchange value over the network.

According to the announcement, the Non Fungible Tolkien was created in partnership with Eluvio, a Content Blockchain pioneer, and was made available for purchase on October 21st, 2022. The Lord of the Rings NFT is a multimedia NFT allowing the owner to engage with the two dynamic menu options:

A surprise location-themed, interactive navigation menu based on 1 of 3 locations from the movie:

This option for the Warner Bros. NFT includes the complete interactive navigation experience with all 3 locations and bonus image galleries that the Mystery Edition did not have. It also contains a full-length feature film Extended Edition in 4K UHD, over 8 hours of special features with commentary and AR collectibles in all 3 locations.

The Lord of the Ring NFT is the first influential studio film released in Non Fungible Tokens form. The film giant has decided to make the process simple and manageable, thus including the uninitiated. Consequently, this move is seen as Warner Bros.’s attempt at destigmatizing and redeeming NFTs, blockchain, and Web3, as they do not have the best reputation. Here’s how you can purchase your LOTR NFT:

The LOTR Warner Bros. NFT marks a possible new way of movie distribution directly to consumers. Furthermore, it promotes engaging interested people through communities and tradeable marketplaces. Finally, It aims at providing the practical utility of Web3 and NFTs.

The Lord of the Rings: The Fellowship of the Ring is a masterpiece that influenced mainstream media for 11 years. Warner Bros.’s initiative to revive the movie is both commendable and questionable. The LOTR non fungible tokens are a brilliant concept. However, due to the ill reputation of Web3, and subsequently, NFTs and blockchain, it may result in an adverse reaction. However, according to the website, the expensive Nun Fungible Tolkien: Premiere Epic Edition is already sold out. So, there might still be hope for redemption. Nevertheless, until Web3 is fully developed and operational, we won’t know its pros and cons.